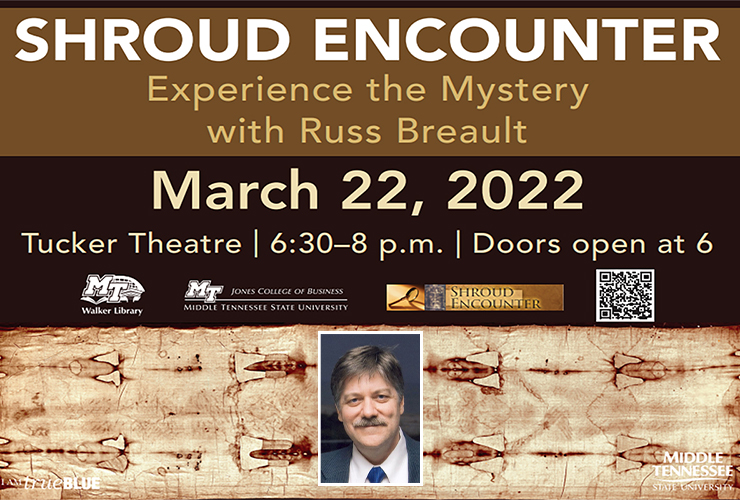 A controversial artifact that has been debated by Christians and scholars for centuries will be the subject of an upcoming event at MTSU.

This event, which is sponsored by the James E. Walker Library and the Jennings A. Jones College of Business, is free and open to the public. It will include more than 200 big-screen images pertaining to numerous aspects of shroud research.

The Shroud of Turin, named for its discovery in Turin, Italy, is a 14-foot-long linen cloth bearing the apparent likeness of a crucified man. It bears bloodstains that some say match the Biblical account of the crucifixion of Jesus of Nazareth.

This cloth has been subjected to chemical, mechanical and carbon dating analyses of varying credibility. In 1981, a group of scientists found no trace of artistic substances on the cloth. They found that the shroud contained human DNA and that the blood was type AB positive. However, the shroud shows no body decomposition stains.

Breault is president of the Shroud of Turin Education Project Inc., whose stated mission is “to advance the knowledge of the shroud to a new generation,” according to www.shroudencounter.com.

He has researched and lectured on the shroud for more than 30 years and is a member of the Shroud Science Group, an international consortium of scholars involved in ongoing shroud research.

“Could the shroud be the most important archaeological artifact ever found, or is it just a medieval fake? Does it provide clues to what happened during the crucifixion and resurrection, or is it just a pious artwork created to represent these events? After thousands of hours of scientific analysis, the shroud remains a profound mystery.”

A campus parking map is available at http://bit.ly/MTSUParking. For more information or to reserve blocks of seating for large groups, contact Carolyn Tumbleson, development director of the Jones College of Business, at 615-494-8990 or carolyn.tumbleson@mtsu.edu.