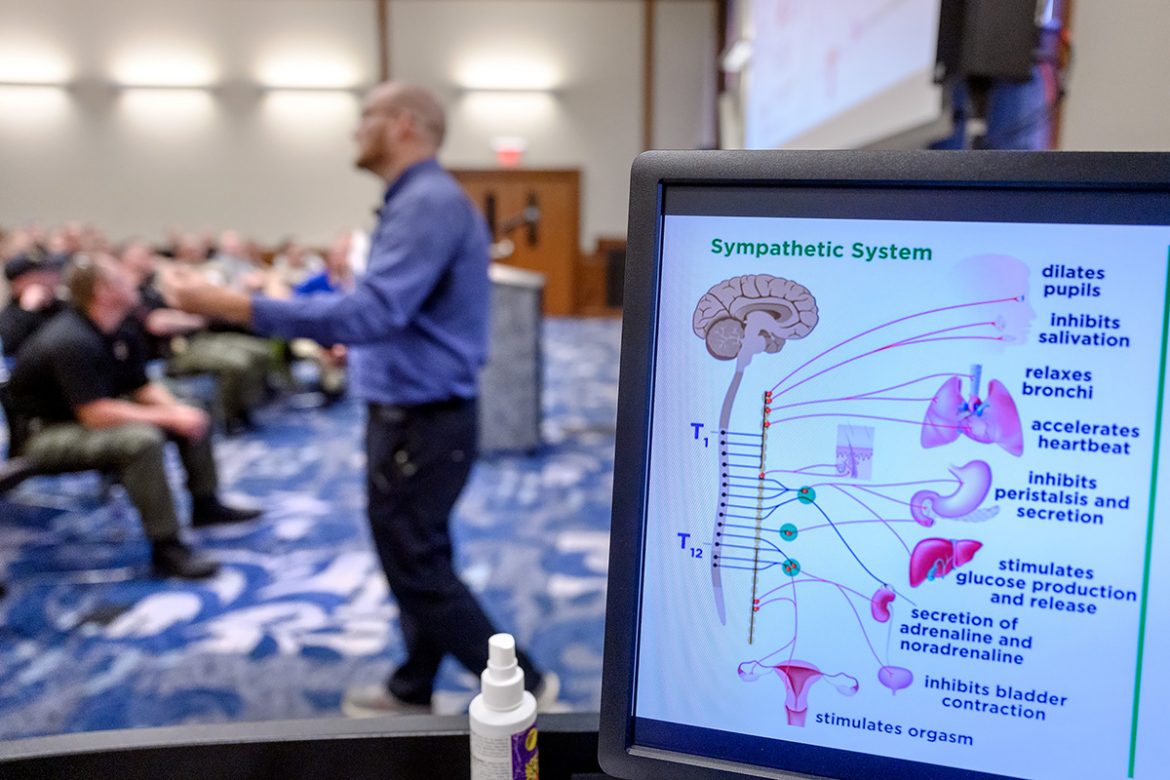 A first of its kind workshop for drug recognition experts brought 100 police officers and forensic toxicologists from agencies across the state to MTSU this week — with plans to make these trainings annual events.

MTSU Forensic Science teamed with the Tennessee Bureau of Investigation and Tennessee Highway Safety Office for the two-day session to refresh the officers on the foundation of drug recognition experts, or DREs, take a deeper look into the central nervous system, look at various drug categories to better understand their pharmacology and how they affect human performance and more. 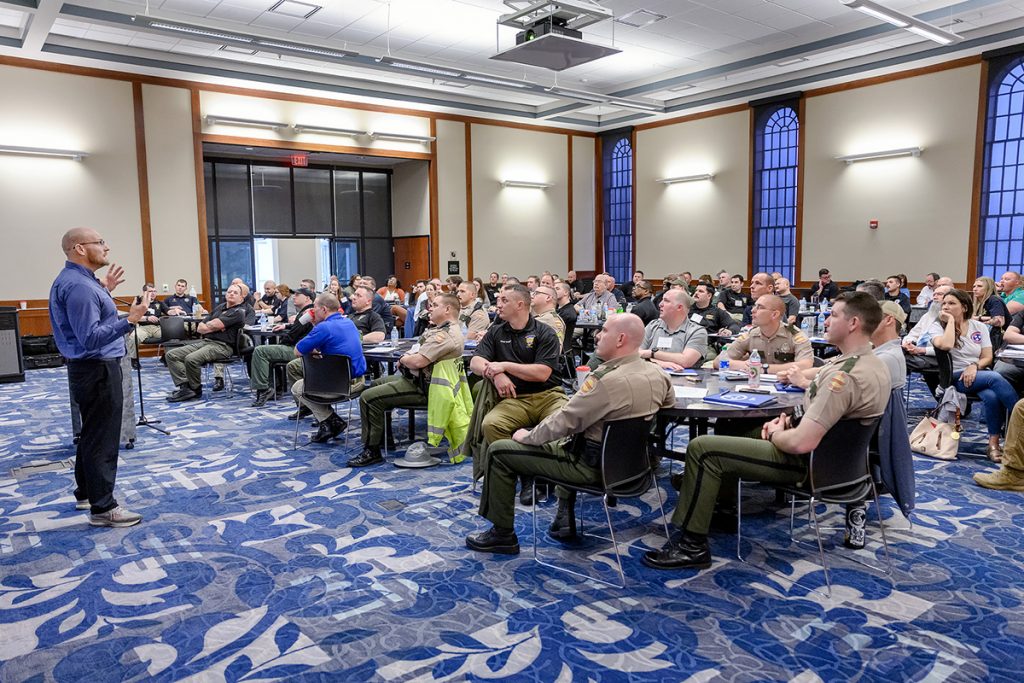 In a teaching moment, MTSU biology professor Kiel Ormerod provides history and years of forensic science research during his ADAPT lecture on the brain for an audience of law enforcement officers Monday, March 7, at the MT Center in the Ingram building. About 100 state, city and county officers attended the two-day workshop. (MTSU photo by J. Intintoli) 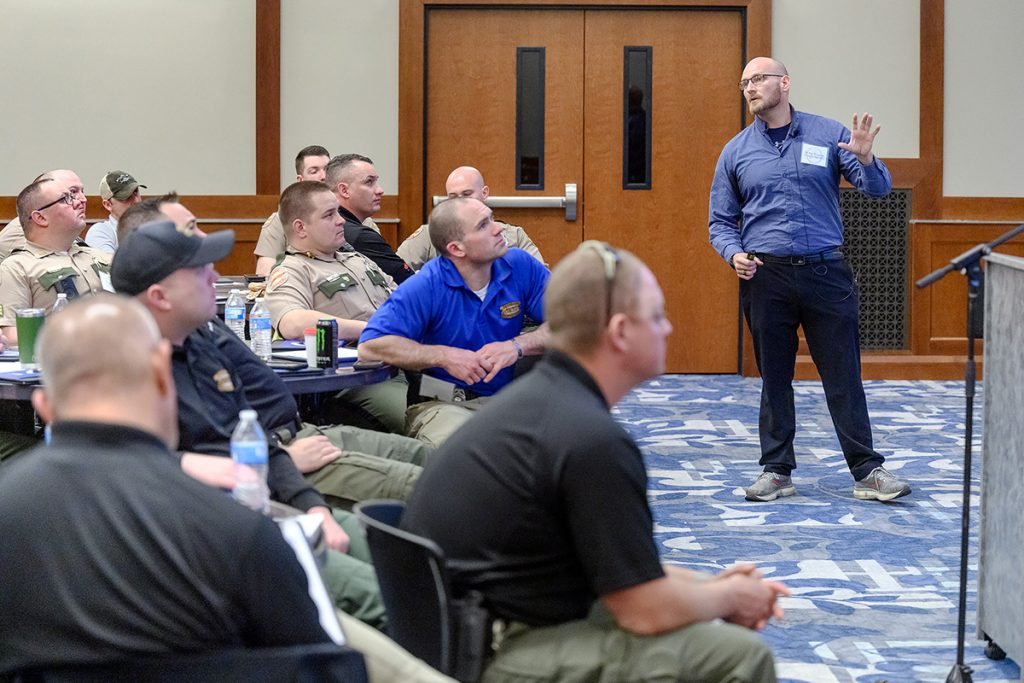 The March 7-8 session called ADAPT — “Advanced Drug Assessment through Physiology and Toxicology” — had been scheduled for May 11-12, 2020, but delayed because of COVID-19. Officers from Memphis to Mountain City attended the event in the Ingram Building’s MT Center. 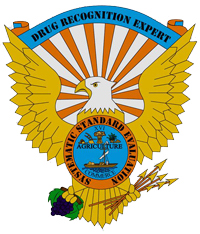 The conference featured MTSU biology assistant professor Kiel Ormerod covering the anatomy and physiology of the brain, other drug experts from TBI, panel discussions, oral fluid testing’s status and a closing session on how prosecutors, DREs and toxicologists discuss how to present their information in court.

Tony Burnett, state DRE coordinator, said the officers were “here to get some advanced training utilizing our TBI and the MTSU professors and help deepen their understanding of the physiology of the brain, the different drug categories and several different drugs in the categories.”

Frank Bailey, director of the MTSU program, termed it “a great success for the Forensic Science program, for MTSU and for the drug recognition programs for the United States because this is the first event of this kind in the U.S., where they are having this advanced type of training. We were really excited to get a chance to help out with this.”

Organizers will be reviewing officers’ feedback in the coming weeks. “We hope this will be an annual event,” Bailey said. “There probably also will be similar events happening at other places around the country, whether we’re involved with those, probably not.” 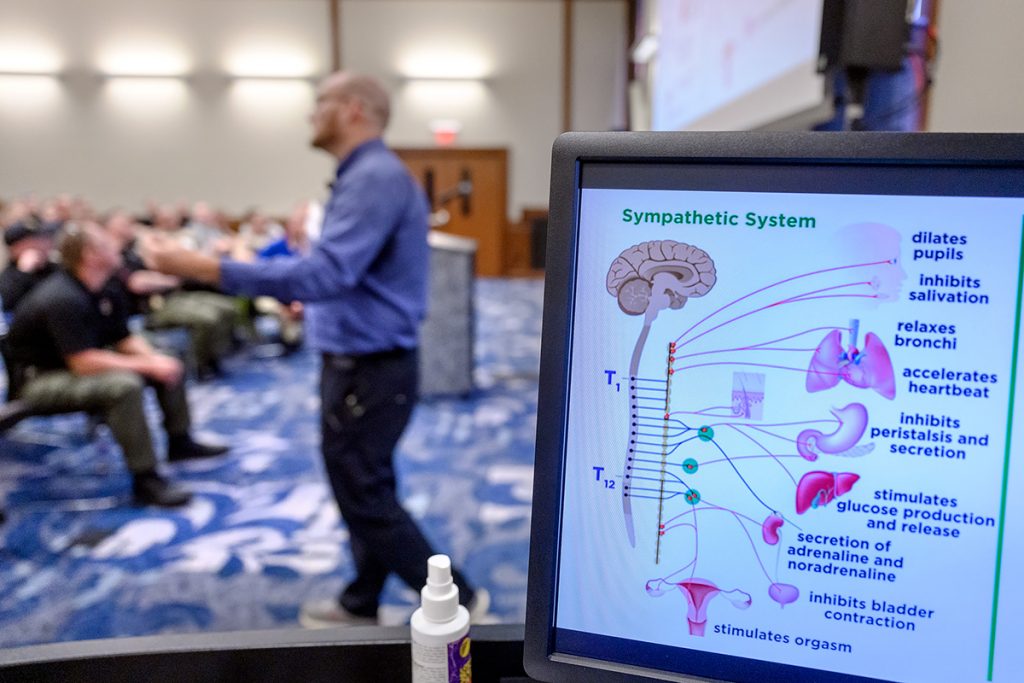 MTSU biology assistant professor Kiel Ormerod delivers a presentation about the history, anatomy and physiology of the brain and central nervous system March 7 to 100 DRE police officers attending a two-day refresher workshop in the Ingram Building’s MT Center. The event, three years in the making because of pandemic delays, was a collaboration between MTSU Forensic Science, the TBI and the Tennessee Highway Safety Office. (MTSU photo by J. Intintoli)

In a teaching moment, Ormerod’s years of study and research into the brain provided the officers with new insight into how drugs affect the central nervous system.

“Understanding where the seeds of really important physiological and behavioral processes are found in the human brain — things like emotion, behavior, motor control, speech comprehension and ability to articulate speech — and where that information’s found in the brain,” said Ormerod, who joined the faculty in 2021, coming to MTSU after nearly six years at MIT, the last year as a research scientist.

“And, to then turn around and explain to them (officers) how the brain functions on a cellular level, how drugs and psychoactive substances altar those cells in the brain and impact all of those big macroprocesses like how we behave, how we learn, how we make decisions and how we talk and interact with the world around us,” he added.

Psychoactive substances are chemical substances that change a person’s mental state by affecting the way the brain and nervous system work. 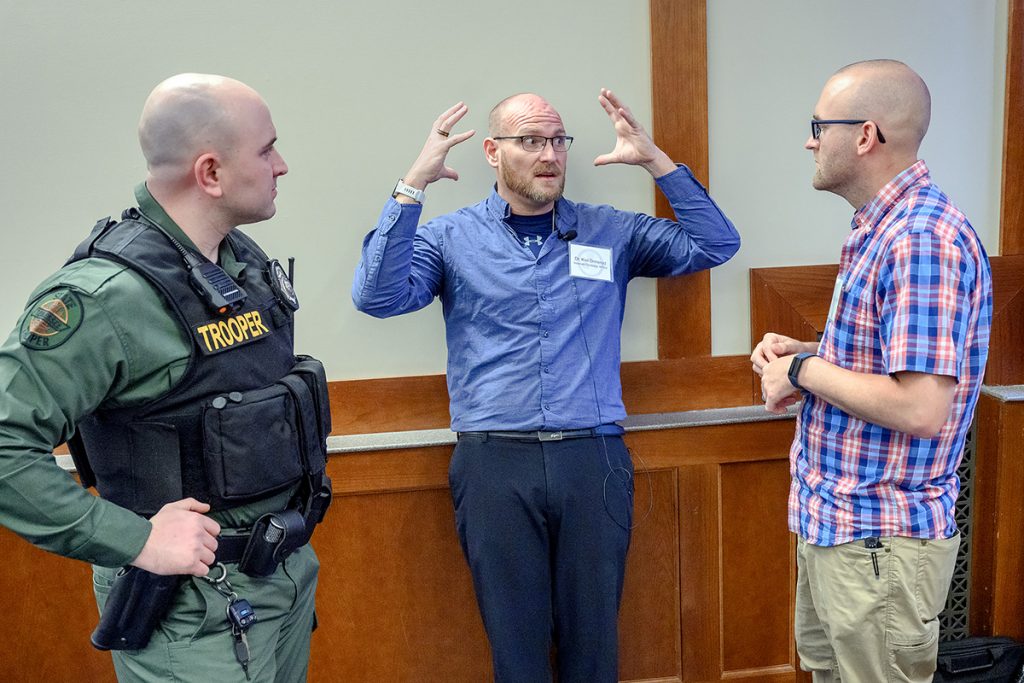 Tennessee Highway Patrol Trooper Dylan Culver, left, Cookeville and Arend Groeneweg, right, with the Metro Nashville Police Department listen as MTSU biology assistant professor Kiel Ormerod answers Groeneweg’s question during a break in the MTSU Forensic Science/THP/ Tennessee Highway Safety Office ADAPT lecture on the brain for an audience of law enforcement officials in the Ingram Building’s MT Center. It was one of several presentations for the drug recognition experts, or DREs, on March 7. (MTSU photo by J. Intintoli)

Mark Mara, a patrolman with the McMinnville Police Department, said “the hardest thing for us to do as DREs when we’re in court is to explain to a jury how the alcohol or the drugs is actually affecting the body.”

Three hours into the first day’s session, Mara said “so far, I’ve learned how the brain works and how it’s affected by the drugs. So, it’s really been beneficial — a really good class. … If I could go again, I would. The more questions I can ask, the better it is for me.”

Having completed the class, Mara said “learning from toxicologists and the MTSU professors helped emphasize how drugs affect the body and brain. … At the McMinnville Police Department, we speak to civic groups and schools. This will help us better explain to parents and students what happens to the body (when drugs are involved).” 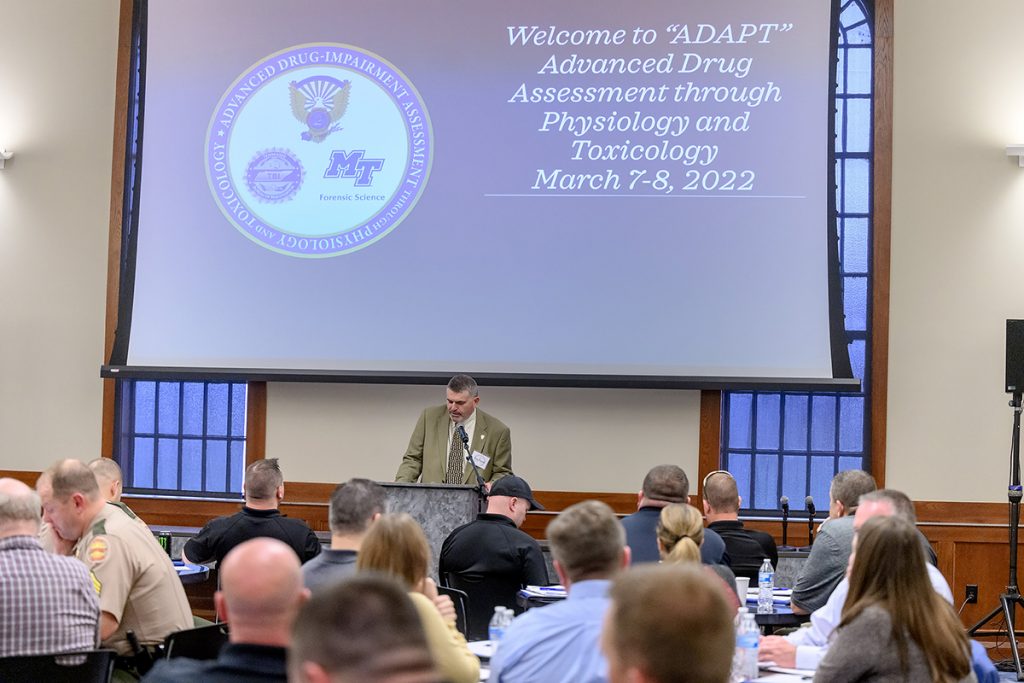