Get fit, raise funds for MTSU’.. 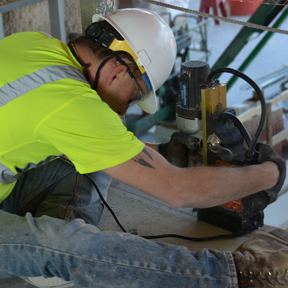 Two MTSU student journalists gained a glimpse of the vast interior and exterior construction progress of the new Science Building during a one-hour tour conducted by university officials.

Sidelines, which identifies itself as an “editorially independent” student newspaper, plans to provide coverage of the 257,000-square-foot-building in an upcoming spring edition.

West, a senior journalism major, shot video of the tour and interviewed Fischer and Bogle. Murphy shot digital photos that will be used in the weekly newspaper’s print and online editions. She is a senior majoring in global studies with a mass communication minor.

Both West and Murphy said they were quite impressed with the building, which is scheduled to be fully operational by early 2015. They told Fischer and Bogle that they wish they could take science classes in the new building.

“Of course, I wish I could take a class in there,” said West. “It’s going to be new and improved. It won’t be dingy and rundown. … It’s bright and open, and the new freshman class who uses it will probably never realize how fortunate they are to have that facility.”

She added that “new students and those who are here long enough to use the building will be inspired.”

Bogle noted that the Science Building has a “C” shape, and a courtyard area in the opening of the “C” will provide green space.

Fischer acknowledged that the facility, which is located on the south side of campus along Alumni Drive, is “ahead of schedule and on budget.”

“What we’re trying to create is a place for students to come in and stay,” Fischer said, explaining that the facility is “designed with all constituents — faculty, students, everybody — involved”  while showing an area he called “soft space, a write-up room and a student gathering room.”

“Eighty percent of all MTSU students will have class in this building, so everybody is going to have a chance to experience the state-of-the-art building,” Fischer said.

The second-year dean noted that the university is investing in “top-of-the-line safety equipment in the laboratories — safety hoods, electric shutoffs, first-aid kits, safety showers, eye washes and more.” He also spoke about the “amount of usable space”and bright areas in abundance in the facility, most of which stems from the building’s many windows.

“What I want to see is when it’s dark and all lit up, to get the full effect of the design,” the dean said.

June 22, 2014, is the projected date for substantial completion, Fischer said. Personnel from Turner Construction will perform walk-throughs that will provide a punch list of things they deem need to be fixed. University officials then will do the same.

At some point, when both parties agree the building is ready, Turner Construction officials will hand the building’s keys to MTSU.

Fischer said staff and faculty will start moving into offices this July, followed by laboratories that can be moved and faculty associated with research labs moving in next.

The university will hold a grand opening celebration early next year.