'MTSU On the Record' makes thi.. 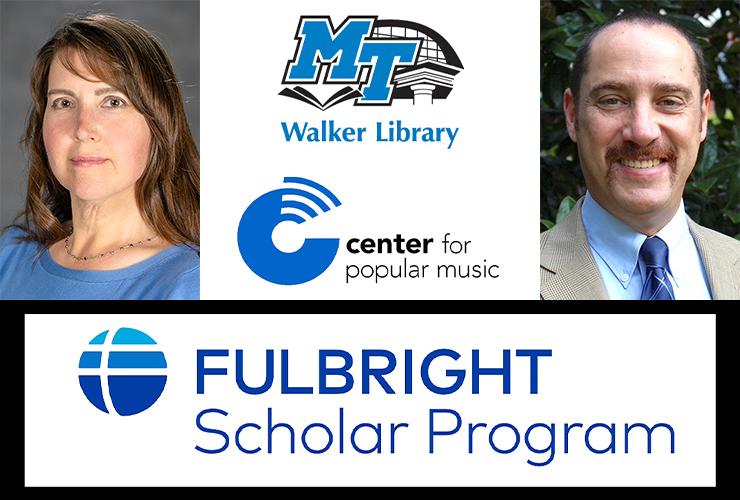 Sloane, user services librarian in the James E. Walker Library for the College of Basic and Applied Sciences, will begin her three-month Fulbright research in September when she travels to the Southeast African nation of Rwanda.

She will be based at the Ellen DeGeneres Campus of the Dian Fossey Gorilla Fund, or DFGF, where she will assess the range of past and currently covered research fields by the organization and plan for the development of the library in the new DeGeneres Campus.

Meanwhile, Reish, MTSU’s Center for Popular Music director, will be traveling to Xalapa, Mexico, and the University of Veracruz, where he will teach classes in the host university’s North American Studies Program — which focuses on the U.S.–Mexico relationship — for five months.

The Fulbright U.S. Scholar Programs offer U.S. faculty, administrators and professionals grants to lecture and/or conduct research in a wide variety of academic and professional fields, or to participate in seminars.

The program awards more than 1,700 fellowships each year, enabling 800 U.S. scholars to go abroad and 900 visiting scholars to come to the United States, according to https://fulbrightscholars.org.

Sloane said the trip to Africa will be “a wonderful opportunity. I have a lot of planning to take care of before I leave.”

The Dian Fossey Gorilla Fund is a nongovernmental conservation organization, and “since the 50s has been focused on preserving gorillas, protecting them from poachers and studying their behaviors. That was primarily why it was founded, and they thought the gorillas would be extinct soon if they did not preserve them,” said Sloane.

Sloane said she learned about the DeGeneres campus and the Fossey Gorilla Fund last year and “thought it would be a great Fulbright opportunity.” The Ellen DeGeneres Campus, named after the popular American comedian and talk show host, opened in February to facilitate science-related research.

When the DFGF decided a few years ago to construct a facility in Rwanda, the organization received a lead gift from DeGeneres and her wife, Portia de Rossi. Subsequent donations allowed the fund to create a state-of-the-art research and learning facility and its first permanent home in Rwanda, according to the fund’s website.

“The Ellen DeGeneres Campus has been a place for coordination of research and support through grants, fundraising campaigns. The mission has moved from primarily gorillas,” Sloane said. “DeGeneres, who has her own charity for wildlife and natural conservation, knew the need for a new building, and she donated money. It is a technologically advanced and eco-friendly campus.”

Sloane said her research will “assess the range of past and currently covered research fields by DFGF and fields of expertise covered by collaborations/partnerships. It will also develop tools that will help monitor, document and evaluate the impact on various fields of research and strength of collaboration in key fields of conservation. This would be for future research management and targeted collaboration network expansion.”

Reish will be at the University of Veracruz from mid-January to mid-June.

“My primary responsibility is to teach two classes at the University of Veracruz, and I am excited about the opportunity,” he said, adding that his connections with Mexico started several years back.

“I have been spending time in Mexico, particularly in Veracruz, for the last six years, where I have developed musical and research interests. I have visited and done some lectures there and made academic and musical friends, which has given me extended time to work with students there teaching them U.S. music, history and culture.”

The Fulbright award will also “give me opportunity to develop my intertest in the history and culture of Veracruz and hopefully build some lasting partnerships in MTSU,” Reish said.

“I also will be giving some public lectures and performances and things of that nature … I have developed my own research interests in the traditional music of Veracruz, which is very distinct within the country. I plan to develop those interests, spend more time working with musicians there, documenting music; I am always learning to play myself.”

Reish said politics, immigration and social media are among the external influences that have affected popular music from Mexico.

“Social media is one of the ways I began to make contacts with Veracruz. I found Mexican musicians and academics who do a lot of sharing, announcements and projects on Facebook. I am interested in the way the traditional music of Veracruz has evolved and interacted with other influences,” he said.

As director for the Center for Popular Music, which is a research archive focused on American folk and popular music, Reish said he hopes to “continue to develop our own archive and activities, public programming, in the realm of music.”

The center is housed within the College of Media and Entertainment.

“I would like to see if this experience can lead to a project that MTSU and Veracruz can pursue together and document musical cultures that can lead to exchange, collaborations, public programs, panel discussions (and) presentations by musicians or scholars, especially using the virtual environment.”

Sloane has been working as a librarian for 17 years and in MTSU Walker’s Library to “provide a lot of public services to MTSU students, faculty members, as well as some administrative responsibilities.”

She is responsible for library collection development in the sciences, scholarly communications advising, liaison services, and reference and instruction services. She said her job brings her in contact with faculty and students who are doing exciting work.

“There is a lot of research output, sharing data, within and without, and a lot of changes. It is an exciting time to be a science librarian, as science is a big focus on the campus. I appreciate everyone’s well-wishes; it has been exciting,” Sloane said.

“I will plan for a library at DFGF’s new Ellen DeGeneres Campus by applying library science research methodologies in the areas of public services, library instruction and collection development,” she said.

Reish will be returning to Veracruz after a trip there for research and music in 2016.

“My host university friends are excited because they have never had a music specialist there before. It has always been historians and political scientists. I am not going to be teaching music students but a class in U.S history, and culture — but through the lens of music,” Reish stated.

This will be Reish’s second Fulbright experience. The first took him to Italy 25 years ago.

“Fulbright provides lot of opportunities anywhere in the world and is an effective way to build peace and empathy between cultures. I am going to be an ambassador of the U.S., so it is a wonderful opportunity,” he said.