MTSU turns to Butler for resea.. 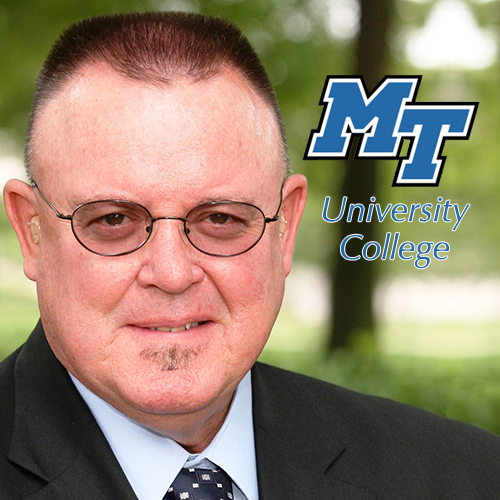 The administrator leading MTSU’s Quest for Student Success will now also serve as dean of the University College and will oversee work with students undecided on majors, as well as adult degree completion, online learning and academic outreach to high school students.

Dr. Richard “Rick” Sluder, who joined MTSU as vice provost for student success in September 2014, succeeds Dr. David Gotcher. Gotcher returns to his role as associate dean of the college after serving as interim dean since August 2015.

Interim Provost Mark Byrnes, who announced the appointment to campus Nov. 23, said the University College’s work with undecided students, as well as its efforts to support and attract older students through flexible courses, online offerings and customized degree programs, complements the work by Sluder and his Office of Student Success.

“Rick Sluder has emerged as a national leader in the area of student success,” Byrnes said. “I look forward to his continued work in that area and to the strong leadership he will undoubtedly provide to our University College.”

The University College is home to some of MTSU’s most successful outreach efforts, including new academic programs tailored to the needs of business and industry, a substantial increase in dual-enrollment college courses taught at area high schools and the Adult Degree Completion Program, which leads the state in enrollment and degree production.

Sluder said he’s excited to serve the university in an expanded role.

“I look forward to an incredible opportunity to build upon the great work that is already occurring across campus,” Sluder said. “MTSU is an exceptional institution, and the alignment of these two units will allow us to better serve even more of the university’s constituents.”

MTSU launched its Quest for Student Success initiative in October 2013, creating extensive reforms aimed at helping its students stay on track academically and complete their degrees.

The MTSU effort works in conjunction with Gov. Bill Haslam’s “Drive to 55” goal to extend the reach of higher education in the state.

Under Sluder’s leadership, MTSU saw record increases this fall in its retention rates and other key student success measures. Freshman retention has increased almost 12 percent since the success program launch, going from 68 percent in 2013 to about 76 percent this fall.

“This means that the MTSU freshman retention rate is at the highest level and increased at the fastest rate in the history of the institution, based on an analysis of available data,” Byrnes said.

Sluder said the university also attained strong increases in retention for transfer and sophomore students. A significantly larger proportion of freshmen — up more than 12 percent from last year — are completing at least 30 hours in their first year of classes, he added.

“More students are on track to finish their degrees in four years, an accomplishment in sync with both national and state initiatives,” Sluder said.

Byrnes said MTSU’s Quest for Student Success received several national higher-education awards this year and will be featured in a forthcoming training course and a national case study.

“All of this is the product of the hard work of our faculty and campus to facilitate the success of our students,” Sluder said, “and these are important milestones as we work to continue to improve every aspect of the learning experience at MTSU.”

At Central Missouri, Sluder also was part of a campus effort to establish the Office of Military and Veterans Services to accommodate student veterans and worked to strengthen its partnerships with community colleges. He also served as dean of UCM’s College of Health and Human Services as well as a professor of criminal justice.

Before moving into academia, Sluder worked his way through the ranks of the Adams County, Colorado, Sheriff’s Department, rising to captain and administrator of the adult detention facility there.