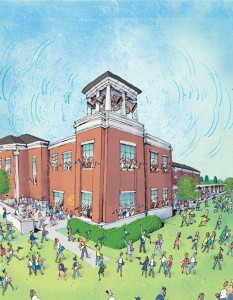 When the Paul W. Martin Sr. Honors Building was dedicated in 2004, there were just seven undergraduate theses by Honors students. Eight years later, in the 2011–12 academic year, the number of students working on theses had grown to 55. That near eight-fold increase in eight years bodes well for MTSU’s continued status as the top destination for Tennessee’s best and brightest students.

Current enrollment in the University Honors College includes dozens of high school valedictorians and several National Merit Finalists. In fall 2011, 416 entering freshmen enrolled in the University Honors College. Their collective high school grade point average was 3.816, and their average ACT score was 28.04. Recipients of the Buchanan Fellowship—the most prestigious scholarship MTSU offers and which is provided to 20 incoming freshmen each year—constituted an elite within this elite. In 2011, the average entering Buchanan Fellow had a 3.9 grade point average and an average ACT of 31.

Although MTSU’s Honors College has experienced significant growth in both student population and theses defended in recent years, Dean John Vile says the best is no doubt still ahead for MTSU’s “college within a college.”

“Success builds upon success,” Vile says. “One of our top goals over the last several years has been to increase these numbers without compromising academic quality, and I think we are succeeding.”