MTSU lends helping hands in Am.. 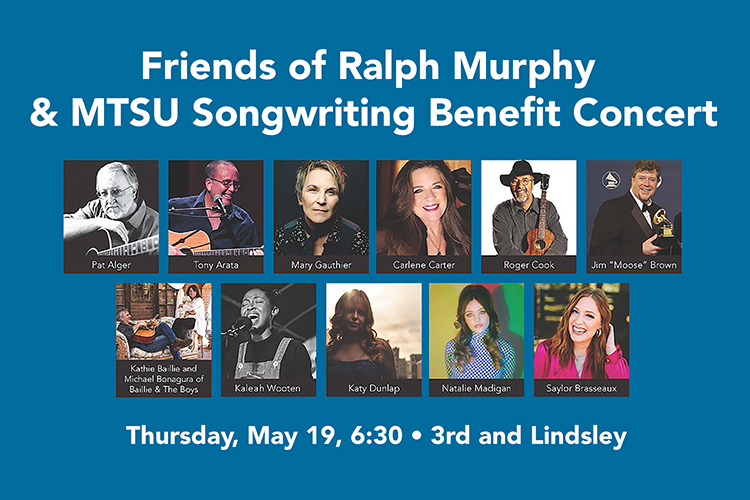 The ones who make the noise on 16th Avenue are bringing their guitars and friends, including four Middle Tennessee State University songwriting alumnae, to Nashville’s 3rd and Lindsley Thursday, May 19, to salute an industry veteran and raise funds for MTSU’s Songwriting Center.

The “Friends of Ralph Murphy and MTSU Songwriting Benefit Concert,” set to begin at 6:30 p.m. May 19 at the club at 818 Third Avenue S., will feature multi-award-winning singer-songwriters Carlene Carter, Mary Gaulthier, Tony Arata, Pat Alger, Roger Cook, Jim “Moose” Brown and Kathy Baillie and Michael Bonagura of Baillie & the Boys. (A poster including their work, which can be enlarged with a click, is at right.)

MTSU grads Saylor Brasseaux, Katie Dunlap, Natalie Madigan and Kaleah Wooten, whose blossoming careers are in music genres ranging from pop to soul to R&B to jazz, will join the longtime songwriters to open the evening’s showcase.

The musicians will honor the late Murphy, a Canadian musician, producer and songwriter who began writing and performing in the mid-1960s, then brought his talents to Nashville in the ‘70s to write No. 1s for Jeannie C. Riley, Crystal Gayle and Ronnie Milsap.

He also worked closely with the Nashville offices of the performing rights organization ASCAP to protect songwriters’ rights and train them in workshops.

The funds raised from the $20-per-ticket event will go toward a writer’s room named in Murphy’s honor inside the center for MTSU’s Commercial Songwriting Program.

It’s scheduled to open in spring 2023 in the university’s Miller Education Center on Bell Street near the main campus.

“I hope everyone can join us as we gather to celebrate Ralph Murphy in support of naming a writer’s room in the new MTSU Songwriting Center in his memory,” said organizer Odie Blackmon, director of the Commercial Songwriting Program and a professor in MTSU’s Department of Recording Industry.

“We have an awesome lineup of artists performing at 3rd and Lindsey for this benefit concert, including MTSU songwriters that will be opening the show! If people can’t make it to the concert, they can make a gift online at www.mtsu.edu/supportmedia and designate ‘Ralph Murphy Songwriting Room’ in the giving designation box.”

Murphy, who died in 2019 at age 75, was a former president of the Nashville Songwriters Association International and the Nashville Chapter of The Recording Academy, among many music organizations, and a strong supporter of MTSU’s songwriting program.

The recording industry alumni set to perform May 19 are working in various roles as industry professionals today.

Brasseaux, a Carencro, Louisiana, native who received her bachelor’s degree in commercial songwriting in MTSU’s spring 2022 commencement earlier this month, writes in the pop/country/R&B genres and has just released a new single, “Burn This Bridge,” on all digital streaming platforms.

Dunlap, a Nashville resident and December 2021 commercial songwriting graduate, is an R&B/soul/pop singer-songwriter who performs under the stage name “RYN.” She plans to release five new singles in the next few months and works at BMI performing rights organization.

Madigan of Murfreesboro, a 2019 audio production alumna, is an indie-pop artist signed to Endurance Music who’s had recent song placements on Netflix’s “TwentySomethings: Austin” and Hulu’s “The Kardashians.”:

Wooten, a native of Athens, Alabama, who now lives in Murfreesboro, also received her bachelor’s degree in commercial songwriting earlier this month. She’s been featured on tracks by jazz artist Eric Essix and performed with jazz musician Kim Scott and also has arrangement, writing and production credits with Def Jam and Dreamville Records.

Tickets for the 6:30 p.m. all-ages concert are $20 each at https://bit.ly/MTMurphySongwritersConcert2022. Doors will open at 3rd and Lindsley at 6 p.m.

For more information about the concert, contact Blackmon at odie.blackmon@mtsu.edu.

Along with the Commercial Songwriting Program, MTSU’s Department of Recording Industry in the College of Media and Entertainment offers undergraduate degrees in audio production and music business and a graduate program with a Master of Fine Arts in Recording Arts and Technologies degree and an MBA degree with a music business concentration.

For more information about the Commercial Songwriting Program at MTSU, visit www.mtsu.edu/programs/commercial-songwriting.

For more information about the Department of Recording Industry, visit https://mtsu.edu/recording-industry.