Girls are rocking the house at 2016 Southern Girls...

Girls are rocking the house at 2016 Southern Girls Rock Camp 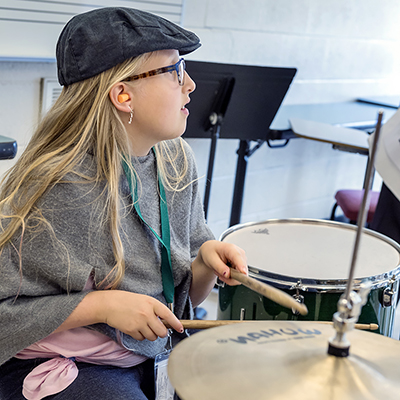 The 14th annual Southern Girls Rock Camp is rolling for girls ages 10 to 17 who want to express themselves musically in a safe, positive environment.

The day camp is underway July 25-29 at MTSU’s Wright Music Building. To find parking and buildings on campus, go to http://tinyurl.com/MTSUParkingMap.

A summertime tradition, the day camp offers instruction in guitar, vocals, bass, keyboards and drums, as well as panel discussions and workshops on various aspects of both the art and business of music.

More than 50 budding female musicians from ages 10 to 17 have spent the past week collaborating on instrumentation, composing and screen printing and discussing music issue, as well as interacting with professional acts like Sallow, Wu Fei, Sarabeth Taite and Nightblonde.

They’ve formed their own bands throughout the week in preparation for the showcase concert at 2 p.m. Saturday, July 30, in the Wright Music Building’s Hinton Hall. Admission is a suggested $10 donation.

“Having a space where youth can come together, make music, communicate through music and unpack a lot of dynamic issues through music education and collaboration, I think, is pretty rare, especially in the realm of rock and roll, which is historically so male and white,” said Sarah Bandy, executive director of the camp’s parent organization, Youth Empowerment through Arts and Humanities, also known as YEAH!

Jerry Coutcher, a 2016 Southern Girls Rock Camp participant and the drummer for the new band “The Infinity,” rehearses before the showcase concert scheduled for 2 p.m. Saturday, July 30, at MTSU’s Wright Music Hall.

Prizes available through a silent auction at the showcase include a drum kit, a Fender guitar and other musical instruments, as well as gift certificates from several vendors.

This year’s campers will interact with speakers from Radical Arts, a Murfreesboro-based artistic group that declares its mission “to bring the arts to the community in a positive, enlightening and educational way.”

Nonviolent Communication Nashville, a nonprofit organization that professes to be “a diverse network of people and communities in Nashville and Middle Tennessee committed to learning, practicing and sharing nonviolent communication,” also will lead a panel discussion.

In addition to corporate sponsors, MTSU’s sponsors include the President’s Commission on the Status of Women, the June Anderson Center for Women and Nontraditional Students, the Center for Popular Music and the National Women’s History Month Committee.

Tuition is $320 per camper and scholarships and donated instruments are available. However, only about 50 campers will be admitted. For more information, contact Bandy at director@yeahrocks.org or 615-849-8140 or go to www.yeahrocks.org.