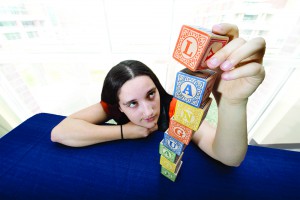 A love of “making things out of other things” has always been an important part of anthropology major Tyler A. Whitaker’s life.

The Nashville native, who is a consummate creative tinkerer, likes “making furniture out of cardboard or costumes out of old clothes. Music is another big love of mine, and I like to sing and write songs,” she says. “I like messing around with The Sims 2, both playing the

game and modifying the software.”

As a child, Whitaker remembers trying to teach herself languages. “[I] would make up my own. I’ve always wanted to know a lot of languages and learn about how people communicate in the context of a different culture,” she says.

Taking a linguistics course at MTSU opened her eyes to “how much science there was behind language. The underlying physiology and structure of language fascinated me just as much as the cultural aspects of it. I believe that you can’t fully appreciate language without all the parts,” she says.

A senior scheduled to graduate in May 2013, Whitaker plans to go into linguistic anthropology. Her Honors thesis, “Reforming the Vision: A New Approach to the Creation of Auxiliary Languages Informed by Creole Language Research Methodologies,” was about her research into developing a pidgin and creole language.

Whitaker named her pidgin language “Ingilisi” and her creole language “Inglish.” Kevin Smith, professor in the Department of Sociology and Anthropology, was her advisor.

While there is no set-in-stone definition about these terms, generally a “pidgin” refers to a blended language that has no native speakers but develops out of the need for communication when two or more groups know little, if anything, of each other’s languages.

A “creole” evolves from a pidgin and is usually developed by the first generation born into the newly formed speech community.

“The process of language creation, colloquially known as ‘conlanging’ (constructed language) or planned language, was something with which I had a lot of personal experience, so I felt I could speak with some authority on it,” says Whitaker.

Whitaker, who is also president of the MTSU Linguistics Club, developed extensive reference tables for her thesis, showing the transfer of English sounds associated with vowels and consonants to their use in her pidgin language, Ingilisi.

Then, she showed how Ingilisi developed into her creole language, Inglish. She also provided a lexicon of words used as objects or to indicate questions or actions, comparisons, numbers, and more. She explained grammar usage and made charts showing how a word was pronounced in English and the two other languages.

Whitaker says she hopes “the use of the language I created [will help] to facilitate global communication. The language aims to be easy to pronounce and to learn, so people of practically any linguistic background would be able to use it.”