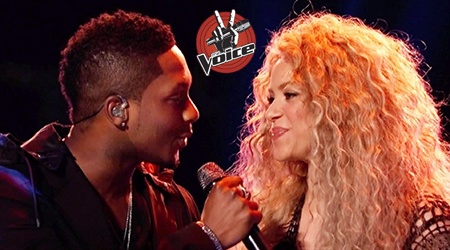 MTSU alumnus Kris Thomas is already assuring fans that the end of his reality-show adventure on NBC’s “The Voice” is nowhere near the end of his musical career.

Viewers sent Thomas home Tuesday night after an eight-week run on the vocal competition that saw the Memphis native repeatedly praised for his “incredible” vocal performances and called “one of the good guys.”

MTSU alumnus Kris Thomas listens carefully to the judges’ commnents after his May 20 live performance on NBC’s “The Voice.” (photos courtesy of NBC.com)

“I knew going into the competition (that) I would be the underdog, being that R&B isn’t as big as pop and country, but I held my own and I am proud,” the 2008 MTSU psychology grad tweeted early today at @kristhomasmusik.

“This is only the beginning, TRUST me.”

He added that he “can’t wait to get back in the studio and record and drop new music!” and told supporters to “be on the lookout for more things to come.”

Thomas had noted that he was the only male R&B performer left in the show’s top 10. Fellow Memphis resident Sarah Simmons remains in the top eight.

“It’s awesome to have CeeLo, who is a ladies’ man himself, show me how to become charismatic,” Thomas joked while rehearsing, admitting he wasn’t quite comfortable with the seductive, upbeat number because “he’s sweet-talking the lady and it’s the opposite of what I’m going through.”

“Find you somebody in the audience to sing it to,” Green advised. “That’s that swagger you’re gonna need.”

Unfortunately, Thomas ran into gentle criticism from some of the judges, citing that same discomfort.

“I wanna feel you thinking less,” Maroon 5 frontman/coach Adam Levine told Thomas. “Throw it away and have fun. Open up more and get more comfortable.”

“You were thinking a lot,” echoed singer/producer/judge Usher. “You could have chosen a better song, definitely, but I do feel it was 100 percent a great attempt. … You are an incredible vocalist, man. Your voice is crazy.”

Thomas’ coach and mentor, singer-songwriter/judge Shakira, seemed to take offense at her fellow judges’ comments, diving into a minute-long defense of Thomas that led Usher and Levine to jokingly run behind their chairs.

“He showed us everything he’s capable of doing with his voice,” she said. “Yeah, he might be a little bit nervous, but hey, give him a break, he’s new at this.

“The important thing about this show is that we’re all discovering the talent that’s here in America, not like who’s got the strongest personality to not feel nerves at all. Kris, you have a sound that sets you apart from everyone in this competition.”

Thomas also performed the Pretenders’ classic “I’ll Stand by You” live on Tuesday’s show with Shakira and teammate Sasha Allen.

When the viewers’ decision was announced and Thomas was the second singer ousted, Shakira became visibly upset. Thomas, however, hugged his fellow competitors with smiles all around. He and the other members of “The Voice’s” top 10 are set to appear on the Oprah Winfrey Network on June 2.w2

“Just want to say thank you to ALL of you that voted and supported me!” Thomas tweeted. “Out of over 50,000 people that auditioned for the show, I made it to the top 10, and it’s because of God and you guys voting.”

Thomas made his reality-show debut March 25 during “The Voice’s” initial “blind auditions,” when the judges could only hear, not see, the contestants.

Shakira chose Thomas to mentor on her team before he could sing the chorus of the R&B classic “Saving All My Love for You.” The other judges expressed surprise at seeing a man at the microphone because of Thomas’ pitch-perfect high tenor vocals on the Whitney Houston classic.

Thomas, 27, minored in industrial and organizational psychology and management at MTSU and performed in talent showcases during his school years. A piano player since age 5, his musical foundation came from singing in his father’s church.

He began work on an MBA degree at MTSU but decided that music was his true goal. He landed a brief record development deal, cutting a debut single and working with country superstar Pam Tillis on “Two Kings,” a tribute to Elvis Presley and Dr. Martin Luther King Jr.

Thomas told Shakira during a “Voice” rehearsal that after that recording deal fell through, he “was about to join the Navy, but something wouldn’t let me sign.… Literally two weeks later, the show called.”

You can watch all Thomas’ performances on “The Voice” at NBC.com.

Thomas’ page at NBC is available here and features videos from all his performances. You also can learn more about him at his website, http://kristhomasmusik.com.