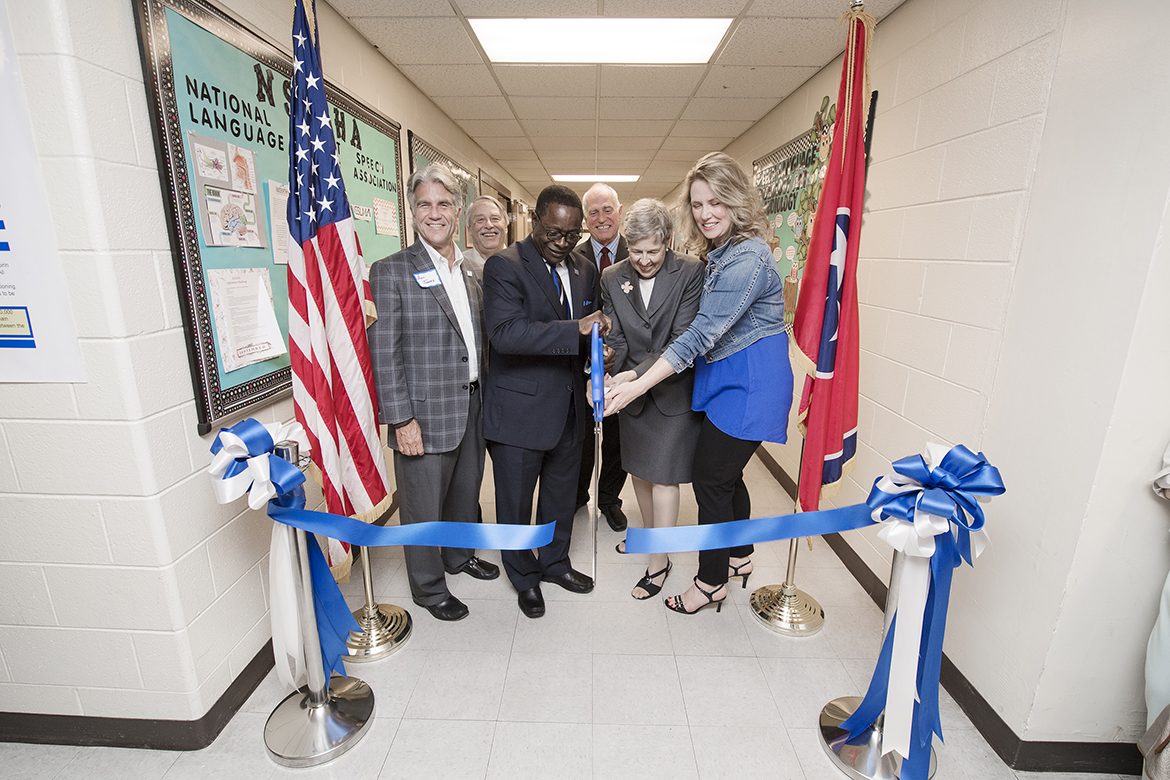 An MTSU program that has improved the quality of life for numerous people and educated thousands of professionals recently marked its 50th anniversary in new quarters.

The Speech-Language Pathology and Audiology Program hosted an open house from 2 to 4 p.m. Friday, Oct. 6, on the first floor of the Alumni Memorial Gym, home of the new Speech-Language-Hearing Clinic.

MTSU President Sidney A. McPhee was joined by faculty and staff from the College of Behavioral and Health Sciences and the Department of Health and Human Performance, as well as supporters from throughout the campus, for a free public ribbon-cutting event followed by tours of the new space made possible by a grant from the Christy-Houston Foundation and major donors.

“We have some of the best faculty in this program that you will find anywhere in the country,” McPhee said. “They are dedicated … and they care about people.”

“The interesting thing now is that this is the only clinic I know of in Tennessee where undergraduates can work with people with communications disorders,” said Dr. David Arnold, who founded the program and nurtured it at MTSU for 39 1/2 years.

Arnold, now a professor emeritus, began by screening education majors and minors for speech and hearing problems, working with the future teachers so that they could be understood by students.

His wife, Janice, performed screening and therapy for students in the Rutherford County schools for 32 years. She worked as an MTSU adjunct professor in the summers of 1963 and 1964.

“The only places (graduates) could work were in schools and a few clinics,” David Arnold said of the period before the birth of the MTSU program.

Student clinician Brandie White, right, works with client Kayla Capps at the MTSU Speech-Language-Hearing Clinic. The Speech-Language Pathology and Audiology Program, now in its 50th year, is celebrating with the clinic’s move to new offices on the first floor of the Alumni Memorial Gym. (MTSU photo by Andy Heidt)

Today, the Speech-Language Pathology and Audiology Program occupies a valued place in the Department of Health and Human Performance. Clients, who pay for services on a sliding scale, range from the very young to the very old.

Clinic Coordinator Elizabeth Smith, who graduated from the program in 1996, said the profession has grown tremendously over the years.

“People are more aware of communication disorders and the responsibilities of speech-language pathologists and audiologists in diagnosing and treating these disorders,” Smith said.

Dr. Patti Thigpen, owner of Thigpen Hearing Center in Murfreesboro, also is an alumna. She said her MTSU education “was the catalyst to a lifelong, fulfilling career in audiology.”

“I enjoy working with the practicum students of the department in our office each semester,” said Thigpen. “The experience is a legacy that I enjoy passing on to others.”

Dr. Rebecca Fischer, professor and coordinator of the Communication Disorders Program, thanked Arnold and other faculty for establishing the program years ago and for those who helped the clinic transition from the Department of Speech and Theatre to Health and Human Performance.

“We have a great 50 years to look back on and we’re looking forward for the next 50 years,” she said.

For more information about the MTSU program and clinic, contact Smith at 615-898- 2662 or elizabeth.smith@mtsu.edu.

MTSU student clinicians Kali Elliott, center left, and Corey Lawson, center right, work with client Malachi McCord in the background as students Kelsey Armstrong and Dayna LaRoue observe from the other side of the glass at the MTSU Speech-Language-Hearing Clinic. The Speech-Language Pathology and Audiology Program is celebrating its 50th anniversary with the clinic’s move to a new home in the Alumni Memorial Gym. (MTSU photo by Andy Heidt)

Officials are all smiles during the ribbon-cutting ceremony Friday, Oct. 6, for the new location of the the Speech-Language-Hearing Clinic inside Alumni Memorial Gym at MTSU.
Pictured, from left, are: Bill Jones, Christy Houston Foundation Board chairman; Terry Whiteside, dean, College of Behavioral and Health Sciences; MTSU President Sidney A. McPhee; Doug Winborn, chair of the Department of Health and Human Performance; Rebecca Fischer, Speech-Language Pathology and Audiology faculty; and Elizabeth Smith, clinic coordinator. (MTSU photo by Andy Heidt)

At left, MTSU President Sidney A. McPhee, and University Provost Mark Byrnes, right, get a tour of one of the rooms in the new Speech-Language-Hearing Clinic location inside Alumni Memorial Gym from Elizabeth Smith, clinic coordinator. (MTSU photo by Andy Heidt)