Sign up now to swim with whale sharks in Honduras ... 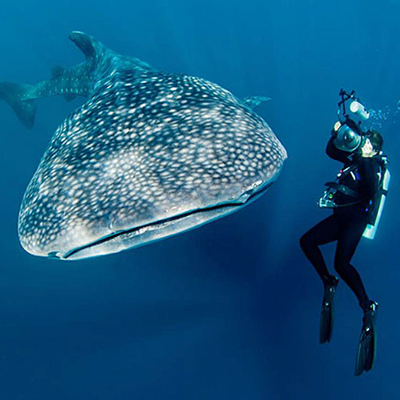 MTSU has set a Feb. 12 deadline for applying to escape the winter chill of the United States for the warm, inviting waters off Honduras in Central America.

This photo by Paul Cowell shows the size difference between a whale shark and a human as the gentle creature, which weighs an average of 9 tons and is about 32 feet long, seems to offer its best side for the diver’s camera. (Photo courtesy of Getty Images)

Ray Wiley, associate director of campus recreation, will lead a group to Utila, Honduras, during the university’s spring break March 5-12.

Although the trip is recreational, it will include a trip to an institute to learn more about whale sharks, the largest fish in existence.

The creatures are considered vulnerable to poachers because of their lack of speed.

“They are slow, swimming at 3 miles per hour, but they can travel 8,000 miles in just 37 months,” said Wiley. “Whale sharks are a migratory species.”

Many divers swim with the gentle giants, who are docile and pose no danger to humans. Wiley said the group plans to swim in the waters off the bay islands of Honduras for five days.

Meals, lodging, island transportation and diving are included in the price, which is $1,450 excluding airfare. All participants must have valid passports.

Participants who wish to dive must become certified. They can do this through short classes at MTSU’s Campus Recreation Center, but Wiley said those who need certification should enroll as soon as possible.