As he walked across the Murphy Center stage Friday, May 3, to receive his doctorate in literacy studies — his fourth MTSU degree — Perry Louden Jr. of Woodbury, Tennessee, completed a 30-year academic journey sprung from the gritty determination of a high school dropout who is now a veteran Rutherford County Schools teacher.

“Looking back to where I was to where I am now, it’s just night and day,” said Louden, one of 384 graduate students who received advanced degrees Friday inside Murphy Center in the College of Graduate Studies event, the first of three spring 2019 commencement ceremonies at the university.

Louden, who was hooded by Dr. Cyrille Magne, an MTSU associate professor in literacy studies, listened with fellow graduates as keynote speaker Judith Iriarte-Gross, MTSU chemistry professor and Career Achievement Award winner, told them that being inquisitive and asking questions has been and will continue to be a key component of their success. 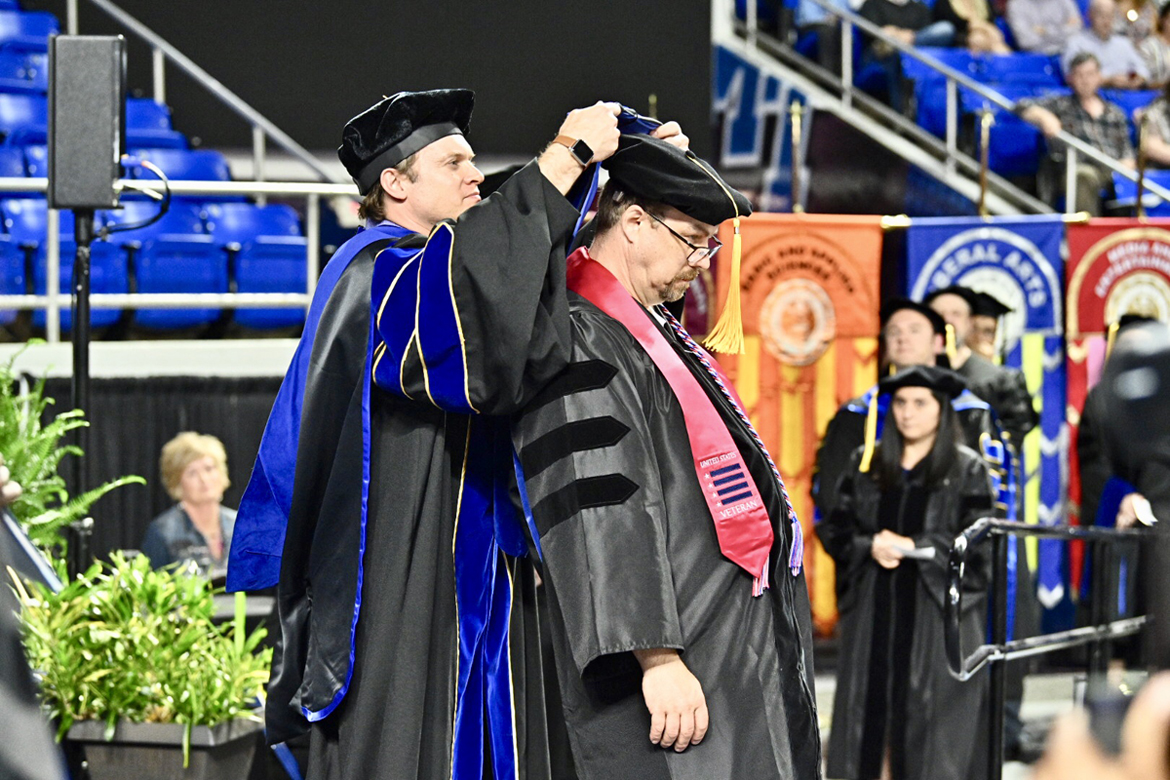 MTSU’s Registrar’s Office reported that the students receiving their degrees this spring include 2,145 undergraduates and 384 graduate students. The graduate degree recipients include 331 master’s candidates, 32 education-specialist recipients and 21 doctoral candidates, and three students will receive graduate certificates.

Louden wasn’t always a likely candidate to be among those graduates.

After failing 11th-grade English in 1985, Louden quit high school. He took and passed the GED exam, then enrolled in Volunteer State Community College for remedial English and math classes.

Next came a transfer to Tennessee Tech for an associate degree in criminal justice, then a bachelor’s degree in that same field at MTSU in the early 1990s.

That period also marked of the first of his two deployments to the Middle East as part of the U.S. Army Reserve; the second came in the mid-2000s. In between, Louden changed career fields to elementary education, eventually getting his teaching license in 2000 and his master’s in special education in 2006 through the MTSU College of Education.

By 2013, he also had his Ed.S. in Curriculum and Instruction and would later be accepted into the interdisciplinary Literacy Studies Ph.D. Program.

“I enjoy teaching reading and tutor on the side,” Louden said of his decision to pursue literacy studies. “I’m not a great reader myself. It took me a while, so I’d like to kind of give back a little bit to the younger students I have to help them get better at reading so that they can enjoy it.”

For the past 19 years Louden has taught at Rockvale Elementary and Rockvale Middle. He remembers a time when, as a young adult, his reading and writing levels were on par with that of the middle schoolers he now instructs.

Louden said his support system — which includes his wife, Becki, close friends and MTSU faculty — “kept me focused and driving on.”

His military experience was also critical to his success; he retired in 2007 from the Army Reserve as a sergeant first class. His wife later served in Iraq, and Louden spent some of that time earning a master’s degree in Christian studies from Lipscomb University in 2009.

A naturally shy person, Louden admitted the military “really pushed me out there to do what I needed to do when I needed to do it.” He said that included facing his struggles with statistics classes while he pursued his doctorate and seeking support services at MTSU to help him overcome his challenges.

Louden advised those wondering if such a journey is also possible for them that “taking little steps at a time” will help “… find out a way to overcome those obstacles.” 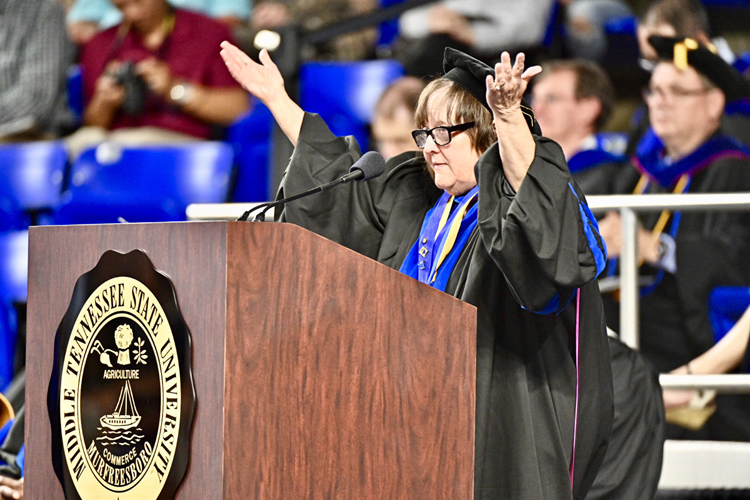 MTSU chemistry professor and Career Achievement Award winner Judith Iriarte-Gross urges new graduates to be inquisitive as she speaks during the university’s College of Graduate Studies spring 2019 commencement ceremony Friday, May 3, inside Murphy Center. MTSU awarded 384 master’s and doctoral degrees in the May 3 ceremony and will present 2,145 undergraduates with their diplomas in dual ceremonies Saturday, May 4. (MTSU photo by J. Intintoli)

MTSU President Sidney A. McPhee praised graduates for achieving such an important milestone and encouraged them, as they pursue their careers, to take advantage of the wealth of knowledge they now possess.

“Our broad-based approach to higher education distinguishes your university as a resource for more than solely technical training,” he said. “And it has prepared you not only for your first job but also for jobs that have not yet been created.”

Iriarte-Gross, a longtime champion of increasing women and girls’ involvement in STEM fields, went through a laundry list of potential questions facing the newest university alumni as they embark on their careers, including: “Do I want to work in the public or private sector? Do I want to start my own business? Does the job require frequent travel?”

“Asking questions leads to success. To date, you have asked the right questions and your reward is your graduate degree,” she said. “Congratulations!”

You can learn more about MTSU’s spring 2019 commencement ceremonies here. More photos from the graduate school event are available here.

MTSU’s commencement ceremonies are always free and open to the public. 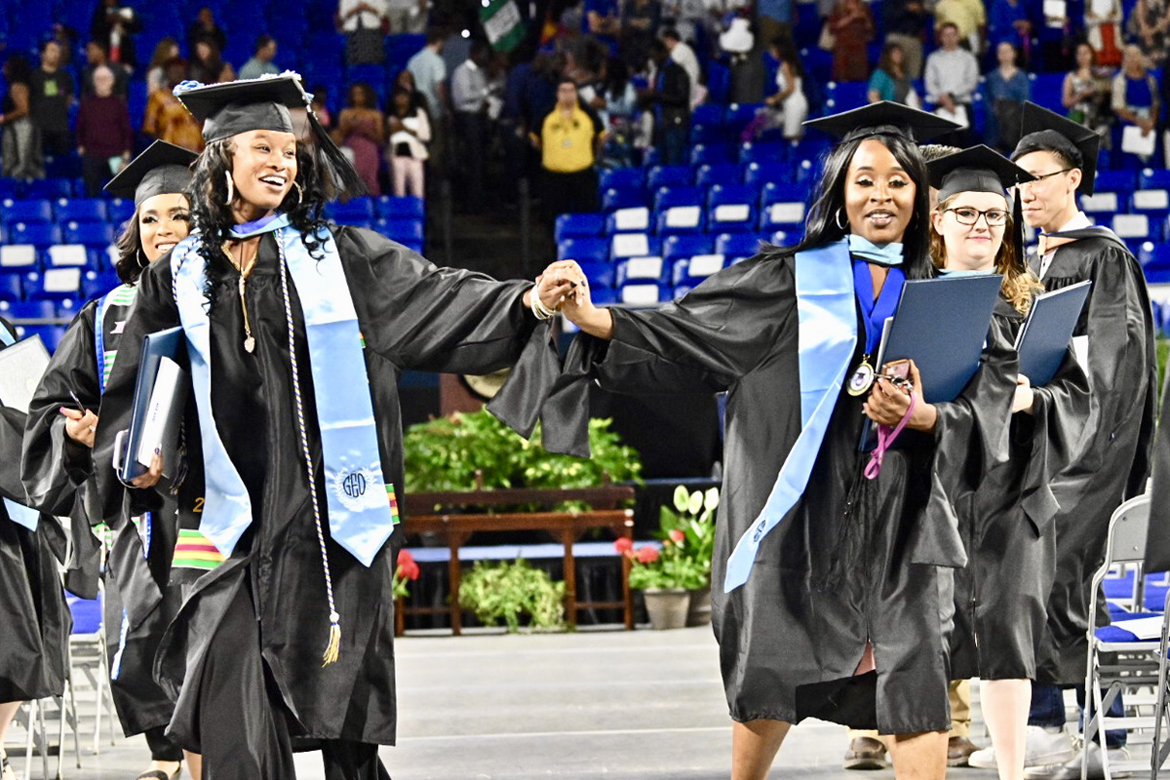 A pair of joyful MTSU graduates clutch their new advanced degrees in education and hold hands as they file out of Murphy Center Friday, May 3, during the university’s College of Graduate Studies spring 2019 commencement ceremony. MTSU awarded 384 master’s and doctoral degrees in the May 3 ceremony and will present 2,145 undergraduates with their diplomas in dual ceremonies Saturday, May 4. (MTSU photo by J. Intintoli) 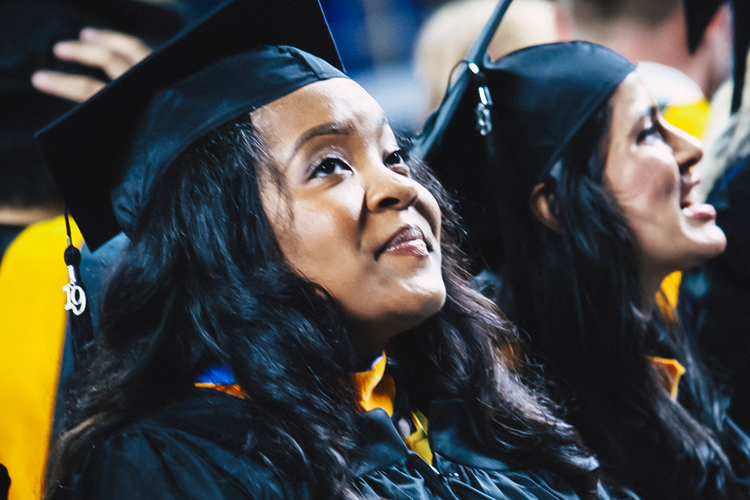 A proud MTSU graduate student looks at and listens to the supportive crowd inside Murphy Center Friday, May 3, during the university’s College of Graduate Studies spring 2019 commencement ceremony. (MTSU photo by GradImages) 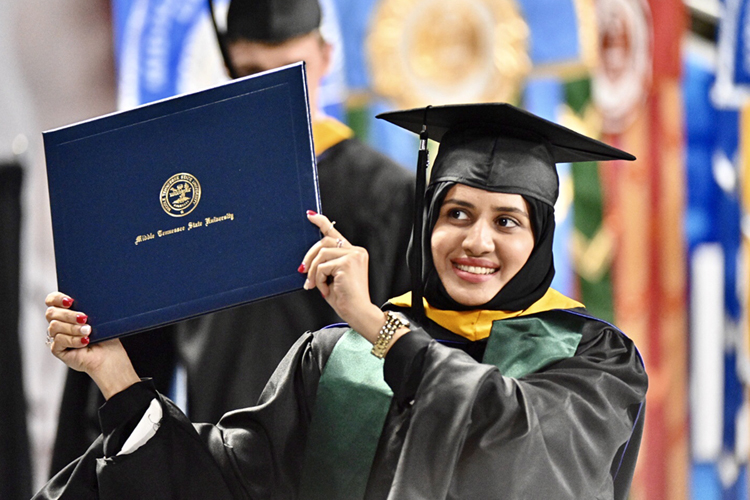 A new holder of an advanced degree from MTSU’s College of Graduate Studies and the Department of Health and Human Performance displays her accomplishment to family and friends as she returns to her seat in Murphy Center Friday, May 3, during the university’s spring 2019 graduate commencement ceremony. (MTSU photo by J. Intintoli)