Step into the new season at Spring Dance Concert A... 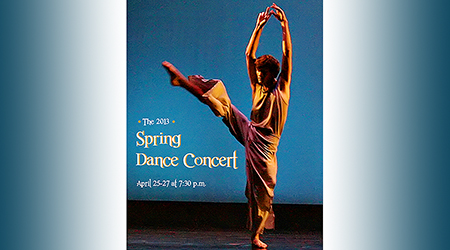 MTSU’s Department of Theatre and Dance will celebrate the new season with its Spring Dance Concert, scheduled for Thursday, April 25, through Saturday, April 27, in the university’s Tucker Theatre.

Performances are set at 7:30 each evening.

Directed by Professor Kim Neal Nofsinger, the 2013 Spring Dance Concert will feature a large cast of approximately 40 dancers with a variety of music to explore various aspects of diversity.

“The show has pieces such as ‘Raymonda,’ a classic ballet, and more modern things as well. So there will be something for everyone,” said Nofsinger, who directs MTSU’s nationally recognized dance program.

Auditions were held last fall, he added, and the dancers have been practicing six days a week since January.

“I’m excited to be working with everyone,” said student dancer Aaron Allen. “I get to do four pieces, one of which I’m partnering people sitting in chairs. It’s so much fun.”

Allen will be part of “Uncommon Rituals,” a dance created by guest artist Heidi Schill Clemmons that integrates two guest performers who use wheelchairs in their daily lives.

General-admission tickets for the Spring Dance Concert are $10 for adults and $5 for K-12 students. MTSU students will be admitted free with a valid student ID.

Tickets can be purchased at the door. The Tucker Theatre Box Office will open one hour before each performance, and the theatre will open for seating 30 minutes before curtain time. The box office will close promptly when each show begins, and no tickets will be sold during the shows.

For more information about the show, or to buy tickets online, visit www.mtsu.edu/tuckertheatr/shows.php. You also can call the Tucker Theatre Box Office at 615-494-8810.

A map of MTSU arts venues is available at www.mtsu.edu/socialmedia/docs/mapforweb.jpg.