Step into the new season at Sp..

Professor at Boston Marathon: ‘I just stopped and started crying’ 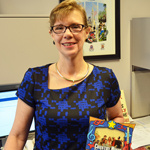 UPDATED AT 6:30 P.M.: MTSU accounting professor Dr. Paula Thomas was about five miles from her goal of conquering the Boston Marathon when Monday’s explosions struck near the finish line.

Even though she was too far away to be hurt physically, the emotional impact was immediate once she learned what had happened.

“It just made me nauseous, and I just stopped and started crying,” Thomas said by phone just after 5 p.m. CDT Monday from her Boston hotel room. “It’s just so tragic.”

It certainly wasn’t the experience Thomas expected for her first Boston Marathon, which was rocked by the twin explosions about four hours into the race.

Thankfully, Thomas was only at mile 21 of the 26.2-mile race when the blasts struck. Running with her was oldest daughter Kate, 28, a Michigan State University graduate student. Having run many half-marathons with her mom in the past, Kate traveled to Boston to run the second half of the marathon.

Back on the MTSU campus, Thomas’ husband, management professor Earl Thomas, hadn’t yet spoken to his wife when reached early Monday afternoon, but had gotten updates from his daughter.

“She was obviously emotionally shaken,” Thomas said of his wife. “I feel better now that I know she’s physically OK and I’m looking forward to speaking with her.”

Though they were kept away from the explosion area, Paula Thomas said she and her daughter could tell something was wrong because there were more police than usual on the scene. She was accustomed to seeing emergency medical personnel at the event in previous visits as a volunteer, but Monday brought in what looked like “undercover officers.”

Thomas didn’t officially finish because the race was eventually canceled. At first, race officials indicated that the finish line was diverted to an alternate place, but at mile 24, police said the race was canceled as it became evident that injuries were serious and rising.

“I’m very grateful that we were safe and OK, but just horrified that others were not,” Thomas said.

Since she had to get back to her hotel anyway, the professor kept running until she completed the 26.2 miles.

“You have to persevere. Of course, it’s not about the race at that point,” she said. “It’s about going on and doing what you came to do in spite of the circumstances.”

Her hotel was located roughly two blocks from the finish line, and she and her daughter had to wait about a half-hour for security clearance after the race. At first, hotel personnel demanded IDs to allow patrons to enter — which most runners didn’t have on them after finishing a marathon — but the runners were eventually able to use their room keys and names to confirm their hotel reservations.

Thomas had made dinner reservations at a favorite seafood restaurant for Monday, but she said they instead settled in for a night of room service after heightened security resulted in a lockdown of the area.

Her flight back to Tennessee is scheduled for Tuesday afternoon, but she was uncertain whether it would be canceled because of security concerns. She said she’s looking forward to returning home to her husband. He had discussed coming on the trip, but decided against it.

“He would have been at that finish line,” Paula Thomas said. “That’s just … there’s no words for what’s happened.”

MTSU accounting professor Dr. Paula Thomas was not hurt in today’s explosions near the finish line of the Boston Marathon.

Dr. Earl Thomas, a professor of management and marketing at the university, said his wife had made it to mile 23 of the 26.2-mile race when the explosions occurred. His wife and other runners who were still out on the course were re-routed away from the blast areas.

Earl Thomas hadn’t yet spoken to his wife this afternoon but was getting updates from his oldest daughter, who was in Boston at the race with her mother.

“She was obviously emotionally shaken,” Thomas said of his wife. “I feel better now that I know she’s physically OK, and I’m looking forward to speaking with her.”

Paula Thomas headed to Boston on Friday, focused not on the roughly 1,100 miles of flying ahead of her but the 26.2 miles of running awaiting her today.

The avid runner joined about 20,000 other runners for this year’s Boston Marathon, continuing a passion that started in her late 20s. She’s already run 70 half-marathons — 13.1 miles each — across the country and remains just four states shy of her goal of running a half-marathon in all 50 states.

MTSU accounting professor Dr. Paula Thomas, shown here holding a photo from her first half-marathon, ran in the 2013 Boston Marathon on April 15. She was not physically injured in the explosions that rocked the event near the finish line. (MTSU photo by Jimmy Hart)

While this was her first attempt at the Boston Marathon, this wasn’t Thomas’ first brush with it. She volunteered for three years at the event while her son attended college there — two years at the start line and one at the finish line.

“I’ve seen the atmosphere, you know, and those people are serious,” she said pre-departure, with a chuckle. But so is she.

To run in the Boston Marathon, you must either achieve a qualifying time or raise money for a charity. Thomas is running as part of a group in support of the American Medical Athletic Association, a nonprofit that encourages healthier lifestyles among physicians and health-care providers and, in turn, among their patients.

Thomas acknowledged that she got into running “a little later in life.” An aerobics class that she signed up for while pursuing her master’s led to a habit of running three miles three days a week.

Health is important to her as well; she comes from a family with a history of heart disease. Her dad died suddenly at age 54, she said, not long after receiving an award “for looking the youngest” at his class reunion.

Since running the County Music Half-Marathon in 2001 in support of a local nonprofit, Thomas hasn’t looked back. At age 56, this was Thomas’ second marathon; her first was in 2010 at the Disney World Marathon in Orlando, Fla.

She recalled it being so unusually cold in Orlando that January morning that the water at the water stations along the route was actually frozen. She loved the atmosphere.

“I love to run when it’s cold,” she said, noting that research indicates temperatures in the low 50s make ideal running conditions.

Weather tends to be the X factor in Boston, making every year an adventure, although the notorious hills along the course also must be reckoned with.

“I’m not terribly afraid of hills, but the hills at Boston come toward the end,” Thomas said. To prepare, Thomas did plenty of hill running since her marathon training began in December.

For live streaming of the race or for more information about this year’s race, visit www.baa.org.