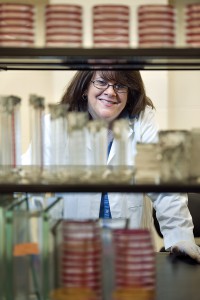 In the wake of natural catastrophes like the recent earthquake and tsunami in Japan, one of the unhappy tasks first responders face is finding, identifying, and properly handling large numbers of the deceased.

Given that grim reality, it’s no wonder recent MTSU graduate Jeannie Stubblefield’s undergraduate research on alternatives for managing deceased human and animal remains in mass fatalities has piqued the interest of the Department of Homeland Security (DHS).

Her research was conducted under an MTSU FIRE grant of $161,000 (principal investigator, Hugh Berryman), funded by DHS and managed through Oak Ridge National Laboratory’s Southeast Region Research Initiative. The official title of Stubblefield’s research was “Potential Use of Chlorine Dioxide to Decontaminate Skin Surfaces in an Animal Mass Casualty Response.”

Stubblefield recently enrolled in MTSU’s new Ph.D. program in Molecular Biosciences, but she also has an appointment to keep. Officials at Homeland Security were so impressed with Stubblefield’s presentation that they have asked to meet with her privately.