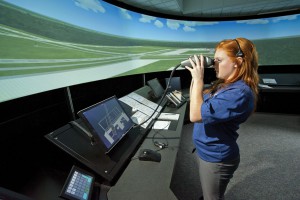 The airline industry is like an orchestra, says Dr. Paul Craig. “When all the instruments are on the same beat and into it, it sounds great. But if one section gets off, it all falls apart.”

It seems intuitive, then, that in aviation, all those “instruments” should practice together before they perform on stage. But at universities across the country, full rehearsal is not part of the aerospace curriculum—except at MTSU.

Yet another first for the University’s aerospace program is its Flight Operations Center–Unified Simulation (FOCUS) Lab, which Craig launched in January with NASA grant funding. In the lab, students majoring in all areas of aerospace, from piloting to dispatch to maintenance, spend a weekly three-hour shift working together in real-time scenarios.

The lab teaches time and stress management—skills that can’t be taught in the classroom, where problems are theoretical and students don’t have to resolve them under pressure or in an interdisciplinary way. “And if you can’t manage it well,” Craig says, “it’s just a train wreck.”

He developed the lab with input from his former students and their employers. “The feedback we got was that this was a missing piece from our curriculum,” he says. “The 20 or so best aviation programs across the United States, including MTSU, . . . all have one thing in common: we do a pretty good job of training our students in their specialty areas. But we never really showed them how all those pieces fit together.”

The Flight Operations Center includes control stations for plane maintenance, crews and flight scheduling as well as a simulator of the Nashville airport ramp tower, which oversees plane traffic at gates and on the concourse. Craig says the lab will connect to the department’s new jet flight simulator and, eventually, to the air traffic control simulator, located a floor below in the Business and Aerospace Building.

Now a required seminar for all aerospace majors, the FOCUS Lab gives “a big leg up” to MTSU grads, Craig says. 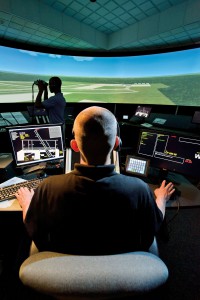 It also gives Craig the opportunity to extend his study of scenario-based training, which he began with previous NASA-funded projects in 2003. The Federal Aviation Administration used his research to develop new standards for pilot training that emphasize proficiency rather than an arbitrary number of flight hours.

“I wanted to bring scenario-based training across the entire curriculum,” says Craig. “An airline’s operation center is a place where all the aerospace disciplines intersect.” By building a replica of such a center, MTSU offers all its aerospace students the scenario-based teaching the University pioneered with its pilots.

Although the FOCUS Lab is unique among aerospace programs right now, Craig says that the FAA has indicated it will mandate just this sort of interdisciplinary training in the future. That’s good news for the U.S. economy, for which the cost of flight delays alone is $33 billion a year.