A brief look at important research at MTSU 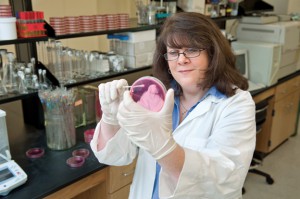 In the wake of natural catastrophes like the recent earthquake and tsunami in Japan, one of the unhappy tasks first responders face is finding, identifying, and properly handling large numbers of the deceased.

Given that grim reality, it’s nowonder recent MTSU graduate Jeannie Stubblefield’s research on alternatives for managing deceased human and animal remains in mass fatalities has piqued the interest of the federal Department of Homeland Security (DHS).

Earlier this year, Stubblefield won first place for her poster research at the Fifth Annual U.S. Department of Homeland Security University Network Summit, held in Washington, D.C. The official title of Stubblefield’s research was “Potential Use of Chlorine Dioxide to Decontaminate Skin Surfaces in an Animal Mass Casualty Response.” Conducted under an MTSU Forensic Institute for Research and Education (FIRE) grant of $161,000, her research was funded by DHS and managed through Oak Ridge National Laboratory’s Southeast Region Research Initiative.

“I was shocked and surprised—that’s about all I can say,” Stubblefield says. “I really didn’t think my project had a chance of winning because I was up against so many master’s and doctorate-level research projects.”

Stubblefield plans to pursue a Ph.D. in molecular sciences at MTSU. But first she has an appointment to keep. Officials at Homeland Security were so impressed with Stubblefield’s presentation that they have asked to meet with her privately. MTSU