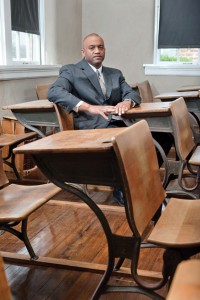 Fifty years after lunch counter sit-ins helped desegregate downtown Nashville, the city’s African-American community still faces widespread racism, according to an exhaustive report, The State of Blacks in Middle Tennessee, published by the Urban League of Middle Tennessee (ULMT) and edited by Dr. Sekou Franklin, MTSU associate professor of political science.  In Nashville, the report states, black men are likelier than whites to go to prison, black students likelier to be suspended from school, and black children likelier to die in infancy.  And Nashville’s neighborhoods are still segregated -not by laws but by the practices of realtors and mortgage lenders.

Most Southern cities have these problems, Franklin acknowledges.  But there’s one distinction, he says, that is specific to “the Athens of the South”: “Nashville is very intentional about creating an image of being a city that’s sophisticated, that’s modern, that’s racially moderate and progressive, whose problems of race and class don’t rise to the level of seriousness that one might find in other cities,” he says.  That construct -“as critical to the image of Nashville as jazz and music are to New Orleans” -has been used as economic capital since the 1950s, he says.  As a result, longstanding problems have gone unaddressed.

“This is my personal opinion -I didn’t talk about this in the report -the political and financial elite in Nashville have been very successful at cajoling and coercing African American leaders to publicly support that image,” Franklin says.  “And that has discouraged a more critical discussion around race and class that needs to happen.”

Franklin’s role as editor of the report synthesized his two professional lives: one in academia and one in social activism.  As an activist, he’d worked with ULMT president Patricia Stokes, who tapped him to oversee the study, which mirrors the National Urban League’s annual State of Black America report.  Franklin says the majority of its content reflects real-life concerns he discovered through his work with several grassroots groups, including Nashville’s Urban EpiCenter, which he co-founded with activist Keith Caldwell.  The initial framing of the report also blossomed from weekly dialogues initiated by Rev. James Lawson, one of the nation’s preeminent theoreticians on nonviolence.  The report touches on broad-ranging subjects: children and church, education and incarceration, housing and homelessness.

He solicited and compiled data and commentary from more than 30 Nashville-area “academians, advocates, and activists.”  Many are well known, like Juanita Veasy, director of the Black Children’s Institute of Tennessee, and longtime social activist Kwame Lillard, a participant in those 1960 sit-ins. Others, like former foster child Danosha Edwards and homeless advocate Al T. Star, Franklin calls “critical voices in Nashville who will never get a seat at the table but are in the trenches.”

While the report’s authors describe a population harmed by entrenched, systemic racism, Franklin notes that “a lot of people would say those decisions that reinforce [institutional racism] have been made by people who see themselves as quite progressive on race.”  Veasy, for example, argues that mainstream social agencies created to advocate for minority children divert limited funding from more effective, black-led grassroots organizations.  A parallel and relatively new phenomenon, Franklin says, is the marginalization of poor blacks as socially liberal whites (and some middle-class blacks) gentrify Nashville’s urban neighborhoods.

Franklin says that when the report was published last December, it drew some criticism from African Americans who are politically or commercially vested in Nashville’s “Athenian” image.  “If you ask most activists who are not in the pocket of the Chamber of Commerce, they’ll tell you these issues are well known,” he says.  “But the report now offers empirical evidence for dialogue.”

Lonnell Matthews, a member of the Metro Council’s Black Caucus, accepts the premise of the report but argues that cooperation -not conversation- is the sticking point.

“You can find programs that focus on our youth all around this city,” Matthews says, “but it’s people wanting to reinvent the wheel and get credit for it rather than coming together to solve a problem that’s common to all of us, that we all know about, but that we target as individuals and not as a community.”

While some might view the report as disheartening, Franklin says he is encouraged by its authors’ specific and varied recommendations for change.  Those, he hopes, will inspire dialogue and help bridge divisions, including those within Nashville’s black community. MTSU

"The State of Blacks in Tennessee", racial tension