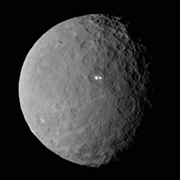 Jana Ruth Ford, an instructor in the MTSU Department of Physics and Astronomy, will present the second in the university’s series of First Friday Star Parties at 6:30 tonight, Oct. 2.

The light coming from a crater on the dwarf planet Ceres has been a topic of discussion for scientists and astronomers. They appear to be consistent with highly reflective materials containing ice or salts. (NASA file photo)

Ford will be discussing the “Dwarf Planet Ceres” in the 45-minute talk scheduled for Science Building Room 1006.

The event is open to the public. Parking is free. For a printable campus map, go to http://tinyurl.com/MTSUParking2015-16.

Ford said the observatory viewing would not be held because of inclement weather.

Ceres has a minor planet designation. It is found in the asteroid belt between the orbits of the planets Mars and Jupiter.

Feb. 19 images from the NASA robotic spacecraft Dawn reveal two distinct bright spots inside a crater. A higher resolution image released in May shows that rather than one or two spots, there are several. NASA said the spots are consistent with highly reflective materials containing ice or salts.

Physics and astronomy is one of 11 departments in the College of Basic and Applied Sciences.