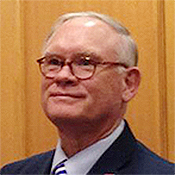 “Ag Day on the Hill” in Nashville now has an added special meaning for MTSU alumnus Pettus Read.

Read always attends the annual event at the Tennessee State Capitol highlighting agriculture statewide — and usually plays a lead role or two. Presenting a bucket trophy to House Speaker Beth Harwell, who out-milked Lt. Gov. Ron Ramsey in a cattle-milking competition, was one of those roles on April 2.

During the House Agriculture and Natural Resources Committee meeting that same day, the committee presented Read, a Rockvale, Tenn., resident and 1970 MTSU graduate with a degree in plant and soil science, with the Outstanding Commitment to Tennessee Agriculture Award.

MTSU alumnus Pettus Read (B.S. ’70), second from right, accepts a framed resolution from the state House of Representatives honoring him with the Outstanding Commitment to Tennessee Agriculture Award for 2013. The award was presented April 2 during “Ag Day on the Hill” at the state Capitol in Nashville. Pictured with Read are, from left, state Commissioner of Agriculture Julius Johnson; state Rep. Curtis Halford, a member of the House Agriculture and Natural Resources Committee; state Rep. Andy Holt, committee vice chair; and Tennessee Farm Bureau President Lacy Upchurch. (photo submitted)

Read, an author, editor and Tennessee Farm Bureau Federation director of communications, also was recognized with a House resolution for his many years of service for covering and promoting the rural way of life in Tennessee.

“I was humbled beyond words for receiving such an outstanding award from my peers and the Tennessee General Assembly recognition for doing something I have always enjoyed so much doing on a daily basis,” said Read.

“Agriculture always has been an important part of my life from my very beginning, and after receiving a degree in agriculture from MTSU in 1970, I have spent my career promoting and educating others about where their food, fiber and even fuel comes from,” he added. “”I have been very blessed to have worked in a field that involves us all in some way or the other.”

In recognizing Read, state Rep. Andy Holt, the House Agriculture and Natural Resources Committee vice chairman said, “There could not have been a more deserving individual to have received the award than our 2013 recipient, Pettus Read. Congrats, my friend.”

Holt, a farmer and businessman from Dresden, Tenn., represents Weakley and Obion counties and part of Carroll County.

Dr. Warren Gill, MTSU School of Agribusiness and Agriscience director, has known Read for decades and said the state recognition is a well-deserved honor.

“Pettus is a remarkable spokesman for agriculture,” Gill said. “His passion is agriculture. He’s one of the reasons for the unprecedented growth and interest in agriculture for high school students and why enrollments in ag programs in colleges are growing.

“His (newspaper) column … reaches over 400,000 people each week. It’s always good, positive, often funny, poignant and smart. He’s a great wordsmith. He sells agriculture. And wherever he is, he’s a proud supporter of MTSU and our ag department.”

Read is editor of the bimonthly Tennessee Farm Bureau News newspaper and the quarterly Tennessee Home & Farm magazine. He also authors the column “Read All About It,” which appears in more than 55 state newspapers.