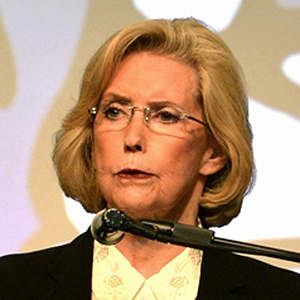 The plaintiff in an historic gender discrimination case didn’t mince words Friday when speaking about the cause to which she’s dedicated so much in her life.

“We have to make sure we get these new bills and these new laws passed,” Lilly Ledbetter told the crowd of about 200 people inside MTSU’s Student Union Ballroom. “And you and I can do it together. I want to see more of you young women in Washington. I want to see you in the House. I’d like to see you in the Senate. I’d also like to see more of you in the boardrooms. Until we get you there, we will not get anywhere close to being equal.”

Ledbetter, whose judicial battle with the Goodyear Tire and Rubber Co. led to the passage of federal legislation, delivered her address Friday, April 5, in the Student Union Building Ballroom.

After working for Goodyear’s plant in Gadsden, Ala., for 19 years, Ledbetter retired and filed suit against her employer in 1998 when she learned she had been making thousands of dollars less per year than men who held the same position.

Despite winning a lower court decision of $3 million, the U.S. Supreme Court ruled in 2007 that Ledbetter could not be compensated because she had not filed suit within 180 days of receiving her first discriminatory paycheck — a requirement of Title VII of the Civil Rights Act of 1964.

However, as dissenting justices in the 5-4 decision pointed out, Ledbetter did not even know about the pay disparity until years after receiving her first unequal paycheck.

The outrage from equal-pay activists sparked the 2007 introduction of the Lilly Ledbetter Fair Pay Act.

The measure altered the law to allow discriminatory acts outside a 180-day period to be included in litigation if discrimination persists into the present day. Its 2009 passage was the first legislative victory of President Barack Obama’s administration.

“I am so proud that that Ledbetter bill was sponsored and co-sponsored by Republicans and Democrats alike,” she told the crowd, but quickly pointed out that the Paycheck Fairness Act has stalled in Washington, with no Republicans yet willing to support the measure.

The proposal would prohibit companies from retaliating against workers who discuss salary information. The law would also require employers to prove any pay discrepancies among workers are unrelated to gender, as well as both necessary for the business and tied to job performance.

“You cannot, as a young person in your job, start out less than you’re entitled to … simply because it will go on for the rest of your lives,” Ledbetter said.

In introducing Ledbetter, Dr. Kaylene Gebert, a professor in MTSU’S Department of Speech and Theatre, lauded the commitment Ledbetter has shown.

“Our speaker has the strength of our convictions who fought a 10-year battle that has benefited each of us,” Gebert said. “What Susan B. Anthony was to women’s suffrage, Lilly Ledbetter is to equal pay.”

The Women’s and Gender Studies Conference attracted scholars and experts from around the world to the Student Union, where all of its events are taking place Thursday, April 4, through Saturday, April 6.

All National Women’s History Month events are free and open to the public. Click here for a complete, printable calendar of events.