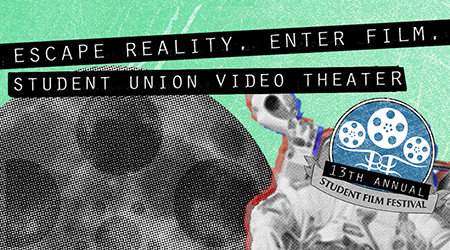 The lights will go down and the curtains go up April 8-12 as some of MTSU’s finest student filmmakers showcase their work nightly at the 13th Annual MTSU Student Film Festival in the Student Union Video Theater.

A special treat is an April 12 Q-and-A session with local filmmaker Christopher Roberts and a screening of his documentary “Street Paper.”

“The Films Council is eager and ready to judge a new batch of student projects,” said Justin Cousineau, MTSU Films chair and festival coordinator. “Last year had great entries and showcased a variety of talent in our diverse student body across all genres and areas of production. I’m interested in seeing what this year’s contestants will bring.”

The “Street Paper” discussion and screening will be held at 5 p.m. April 12, before the awards ceremony.

“‘Street Paper’ was an Official Selection film at the 2012 Nashville Film Festival about Nashville’s successful newspaper sold by homeless citizens, The Contributor, and we are very excited to host him,” Cousineau added.

On awards night, trophies will be presented to the top three participants in the 2013 Student Film Festival, and the Audience Favorite Award once again will allow audience members to vote for their favorite student entry. All the top films will receive other prizes, including gift cards.

For more information about the MTSU Student Film Festival, contact Cousineau at 615-898-2551 or films@mtsu.edu. Information also is available at www.mtsu.edu/events/studentfilm.php.