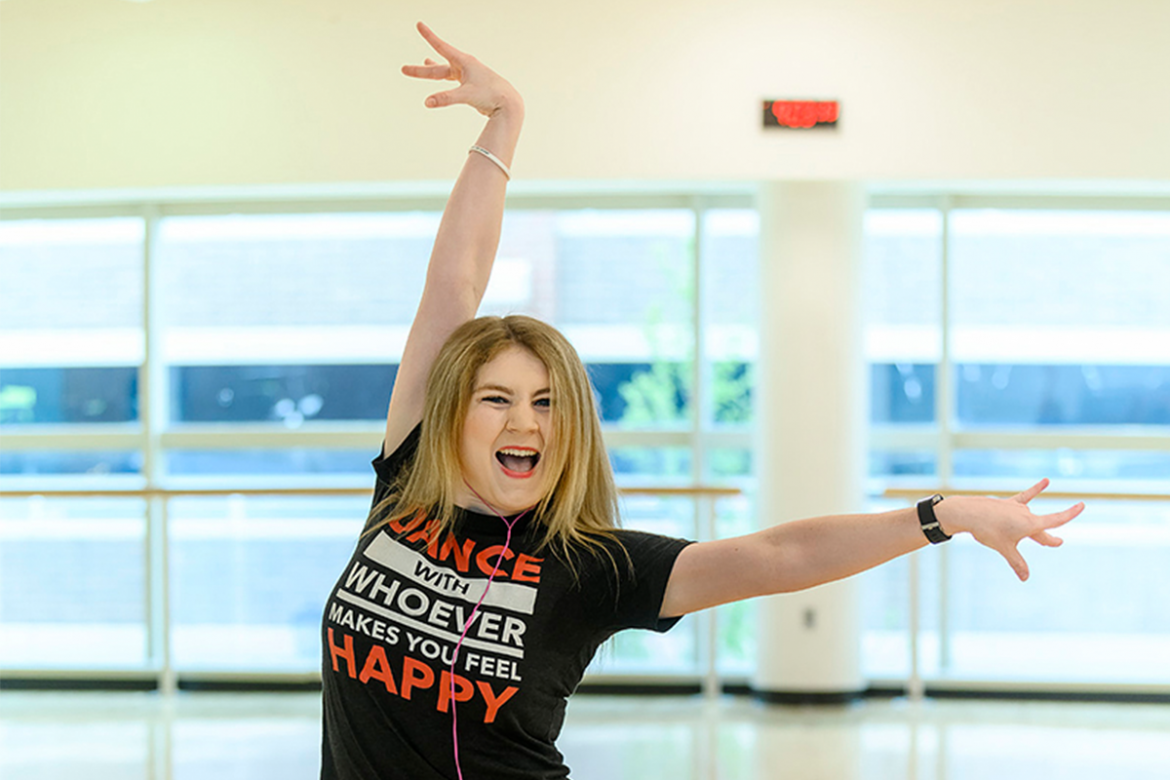 For many people, this strange time of social-distancing has thrown all daily routines to the wayside. Gone are the days of normal work commutes, over-priced coffee indulgences and—for students—daily class schedules. Now the days (which all run together) are ruled with attempts to make sense of new work-from-home schedules, repetitive snacking and listless staring at the ever-growing queue of shows on your TV.

MTSU student Cassidy Johnson, however, isn’t letting this new normal get in the way of her dreams. Despite the stay-at-home order and the subsequently closed gyms, Johnson is persevering— and turning the world into her dance floor.

You may remember Johnson from a previous MTSU News article: the intrepid Buchanan Fellow and media management student that danced her way to happiness and health thanks to one daring moment her freshman year. 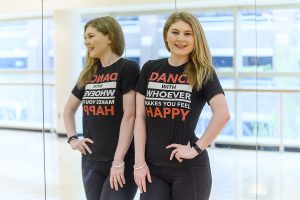 “What got me into dancing was actually an accident,” Johnson said. “When I started at MTSU, I was kind of just looking for a one-credit hour elective to fill some elective time, and my advisor was like ‘Oh, you should take a P.E. class!’ And at the time, I weighed close to 200 pounds. Physical fitness was not a thing I did ever. I was like, ‘Girl, you’re crazy!’”

Johnson laughed. “But I signed up! And then I immediately panicked. I was like ‘I’m gonna fail this P.E. class, I’m going to lose my scholarship because I failed P.E!’ And I was all stressed, so I went to a dance studio back home in Birmingham before I moved here to make sure I wouldn’t fail dance class.And I just fell down the rabbit hole from there!”

Earlier this year, Johnson attended the national dance competition Vegas Open Dance Challenge to compete for “Open Gold,” the “very tip-top that you can dance,” according to Johnson. In the tradition of Blue Raiders, Johnson and her partner smashed the competition, coming out as the American 9 Dance Champions, as well as 2nd place Vice Champions in the Open Smooth routine. 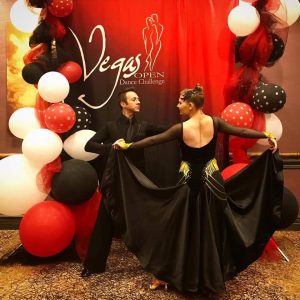 Now in her senior year, Johnson is at the peak of her game and hasn’t let COVID-19 stop her progress….by turning her nearly-empty resident hall into a dance studio.

Before the pandemic, Johnson would work out almost daily for four hours at MTSU’s Campus Recreation Center, and drive to her studio in Nashville two to three times a week for six-hour practice sessions with her coach.  For now, though, Johnson has had to dance to her own music. After choosing to stay in the dorms for convenience and safety, she has created her own daily dance “boot camp” schedule to keep herself sane.

“I’ve had to put myself on a daily schedule because I was going crazy,” she laughed. “6 to 10 p.m. is blocked off as fitness and dance time. I’ve been doing pilates—because I’m actually enrolled in a pilates class—so I’ll do that to get warmed up, and then I’ll usually do about two hours of solo practice out in the hallway. And there’s actually an online group called Dance Vision that’s been giving online seminars, so I’ve been going to ‘dance class’ every day for about 30 to 45 five minutes. We’re taking anything we can get right now.”

When asked if anyone had run into her dance sessions in the hallway yet, she laughed.

“I think I’ve seen—face to face— maybe three people? No one complained about me being disruptive yet!”

The transition from the social atmosphere of the dance studio to isolation is hard for Johnson, but she feels that the routine is helping.

“Ballroom dance, technically speaking, is a part of a broader umbrella called social dancing,” Johnson explained. “Social is in the name of what we do. That’s why this is so hard—because so much of what we do is reliant on not just our partner and my coach and us all working together, but just being around other dancers for support. It does become harder when you’re locked up in your four-by-four room and you’re like, ‘Okay, we’re gonna do this, just us and the cinderblock walls!”

“I used to be a pretty big introvert. I had a lot of anxiety, and I still deal with that, [but] the longer I’ve danced it’s gotten better over the years,” Johnson continued. “But just being in isolation as what I would consider an extrovert has been hard. And it’s anxiety-inducing. But the schedule’s helping me! If I know that every hour of the day is accounted for, and I always have something that I’m supposed to be doing or focusing on, it’s kind of helped me not binge on Facebook depression for too long at a time.”

The mental health aspect is a big part of why Johnson does what she does—the need to focus on something else, she explains, is what keeps her positive in a time where so much is dominated by COVID-19.

“I think to dance, you have to put all of you into it to do it right,” she said. “You have to be thinking about not only the physicality of how I need to move but also the emotion and the story that you want to tell. Even when I’m practicing alone I still have that mindset, you know? I still need to do this as if I were going to go compete tomorrow. My dance practice at night lets me mentally turn off everything else. I have to, to be able to do it the way that I need to.” 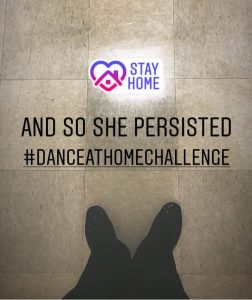 “I think that’s what helped me so much with the anxiety over the years because dance is an escape in a way. Like you can go become these different personalities and these different people throughout all of the different dances that we do, and it lets you take a break from the yammering.”

For other students feeling the struggles of isolation, Johnson recommends finding your own passion and making it part of your everyday life.

“Sit back and think about the kinds of things that you enjoy doing, just for you,” she said. “Not the things that you haveto do, or regularly do. Just think about the things you enjoy doing, and create a routine for yourself and make it a routine. Make time to do that for you. That’s been a big thing for me over the past couple of years. Even when I have so much going on, I have to make time to go to the gym. Because, you know, that’s just what I need for my mental health. If fitness isn’t your thing— I know it’s not a lot of people’s thing— think about what you enjoy and carve out a little bit of your day just to stop, disengage, and do the thing.”

Speaking of doing the thing, when asked what ‘thing’ she wanted to do as soon as the crisis is past, Johnson did not hesitate in her answer.

“Oh, I want to hug everybody at my dance studio. Everybody,” she said. “I’m really firmly holding on to the belief that no one there is going to be ill, and I am going to hug everybody. Because we’re just a family, we really are. And we miss each other so much when we’re apart. But besides that, you know, I look forward to just getting into our competition circuit and being able to travel again. We love it— we love to travel and stay busy, so we’re looking forward to getting back out there.”

Author Angele Latham is a senior at MTSU, majoring in Journalism with a focus in Visual Communications and minoring in Criminal Justice. The views and opinions expressed above are her own.