MTSU students explore new avenues with civics side of science 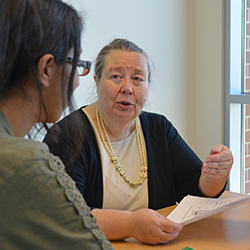 Many of the other class members are not science majors either. However, all of them have had their eyes and minds opened to SENCER — or Science Education for New Civic Engagements and Responsibilities — by professor Judith Iriarte-Gross and, most recently, two invited guests.

MTSU freshman Nick Thomas, left, discusses his honors physical science project with freshman Aaron Warren and junior Miranda Marzette as Monica Devanas of Rutgers University listens. Devanas serves as director of faculty development and assessment programs in the Center for the Advancement of Teaching at the New Brunswick, New Jersey, university. Thomas is a School of Music major from Knoxville, Tennessee. Warren, from Smyrna, Tennessee, is a psychology and criminal justice major. Marzette is an animation major from Old Hickory, Tennessee. (MTSU photos by News and Media Relations)

SENCER courses and programs fortify student learning and interest in STEM — or science, technology, engineering and math — by connecting course topics to issues of critical local, national and global importance.

For MT10, the student-run television station in the College of Mass Communication’s Center for Innovation in Media, Inman interviewed Mappen and Devanas.

“Their seminar made me realize that women have so much potential to do whatever they want to do, and science is no exception,” said Inman, who is from Dandridge, Tennessee. “They talked about how more women are becoming involved in the science field, and while I am not pursuing a science degree, I saw how women can bring different ideas and concepts, as well as diversity, to the field.”

For her generation, Inman said she feels “that more women are becoming involved in this field because of the increasing importance that science has in our lives.”

“We are a generation that has been around evolving technology our whole lives,” she added. “With the brains of those who are rising up to fulfill a science profession, the possibilities are endless as to what will be achieved. The seminar helped emphasize the fact that women should not be afraid to do what they feel would benefit the world.”

Ellen Mappen, left, a senior scholar and informal science education partnership programs director with the National Center for Science and Civic Engagement in Washington, D.C., shares feedback with MTSU freshmen Rachel Eddings and D’Andre Bradley March 31 during an honors physical science class in the Science Building. Eddings is an accounting major from Smyrna, Tennessee, while Bradley is a political science major from Memphis, Tennessee.

Mappen and Devanas attended the March 31 class, listening to students in small groups talk about their current projects and offering feedback.

D’Andre Bradley, a freshman political science major from Memphis, Tennessee, said the “interaction (between the students and SENCER representatives) has been great.”

Mappen and Devanas found the MTSU students — whom they also met for breakfast, through campus tours, an experiential learning panel and more — to be “very articulate, inquisitive and impressive students.”
Mappen, who retired from Rutgers in 2003, is a senior scholar and informal science education partnership programs director with the National Center for Science and Civic Engagement.

Devanas serves as director of faculty development and assessment programs in the Center for the Advancement of Teaching at Rutgers.

Iriarte-Gross, who is director of the MTSU WISTEM (Women in STEM) Center, is the MTSU SENCER team leader. The center uses SENCER educational concepts in outreach activities.