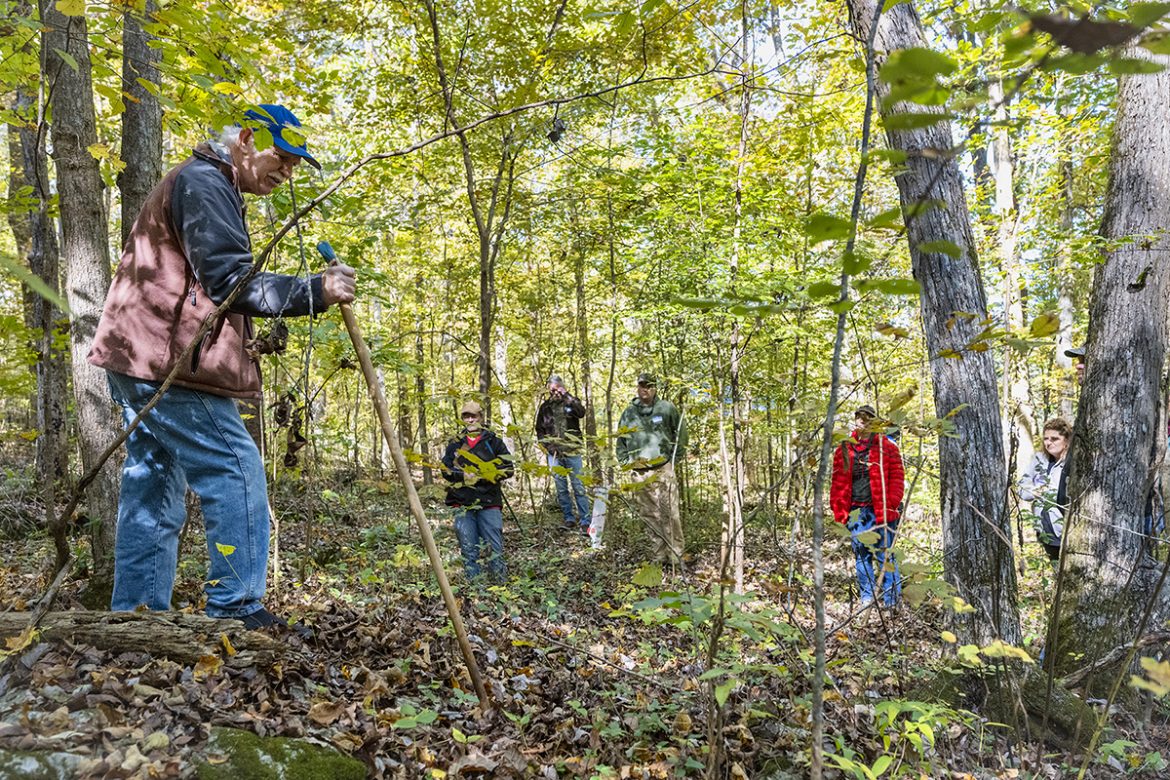 MTSU senior Robert Eichas played an important role by collecting research that was shared during the recent Tennessee Ginseng Growers Workshop in Murfreesboro.

The plant and soil science major spent two months and 100 to 120 hours assembling fungicide data for Eleanor Lopez, an extension assistant with the University of Tennessee Institute of Agriculture at the Ellington Agricultural Center in Nashville, Tennessee. 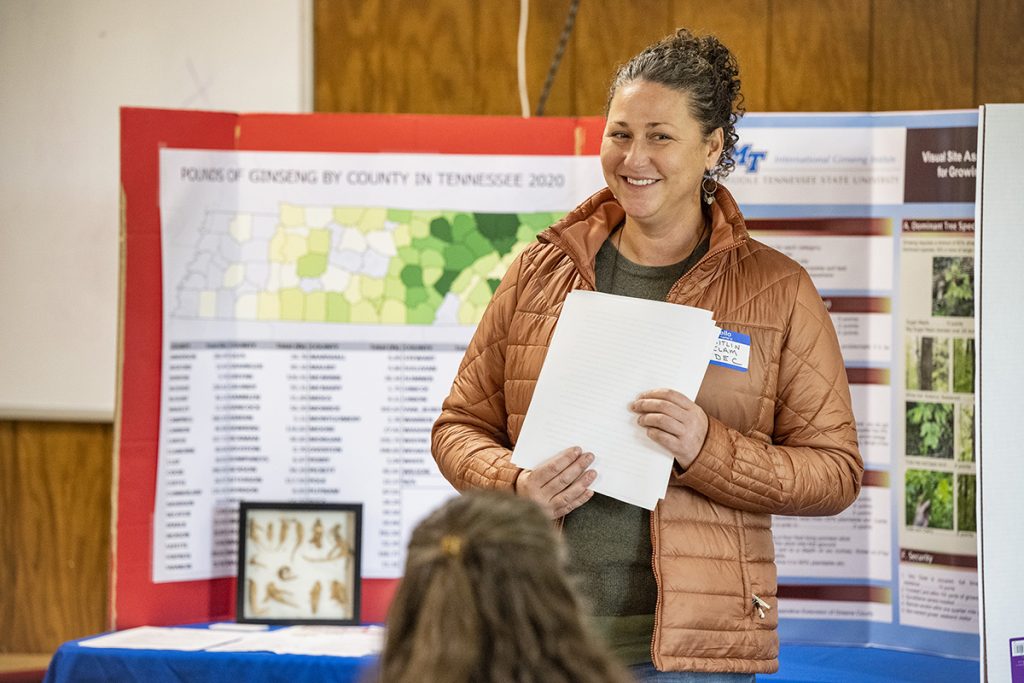 Caitlin Elam, who is with the Tennessee Department of Environment and Conservation/Division of Natural Areas, discusses ginseng regulations and harvest in Tennessee. She spoke during the annual Tennessee Ginseng Growers Workshop Nov. 5 at Barfield Crescent Park’s Wilderness Station. (MTSU photo by Andy Heidt)

The Nov. 5 event, sponsored by the U.S. Department of Agriculture and Barfield Crescent Park, brought growers, potential growers, an herbalist, traders and exporters of ginseng, said Gao, the director of MTSU’s International Ginseng Institute, which provides growers, industry and conservationists with information and resources needed to promote a sustainable harvest now and for future generations.

Attendees came from Middle and East Tennessee — Nashville, Franklin, Pikeville, Clarksville and elsewhere — to glean more information. Ginseng primarily grows in the wild on hilly, mountainous areas across the region and Appalachians. People take American ginseng by mouth for stress, to boost the immune system and as a stimulant. Plants usually mature and produce seeds after five to 10 years.

The study by Eichas, 28, formerly of Cocoa Beach, Florida, now living in Murfreesboro, divulged 10 organic and 20 inorganic fungicides labeled for use on ginseng in Tennessee.

“I gained a greater appreciation for testing pathogen-tracking systems in states,” said Eichas, who wants to pursue a job opportunity with the Natural Resource Conservation Service, a subbranch of the USDA, when he graduates in December.

A May plant and soil science graduate, Alaina Farmer of Franklin, is considering growing ginseng on her family’s 150 acres in Williamson County.

“I feel more confident planting our own ginseng,” said Farmer, who attended with her mother, Angela Farmer, also an alumna. “I knew the location process. I learned about calcium and nutrient requirements and soil testing. If I have questions, I know who to call.”

Beyfuss, a retired New York State ginseng specialist for the Cornell University Cooperative Extension, said his “conservation through cultivation” message at ginseng workshops is that people need to grow it. 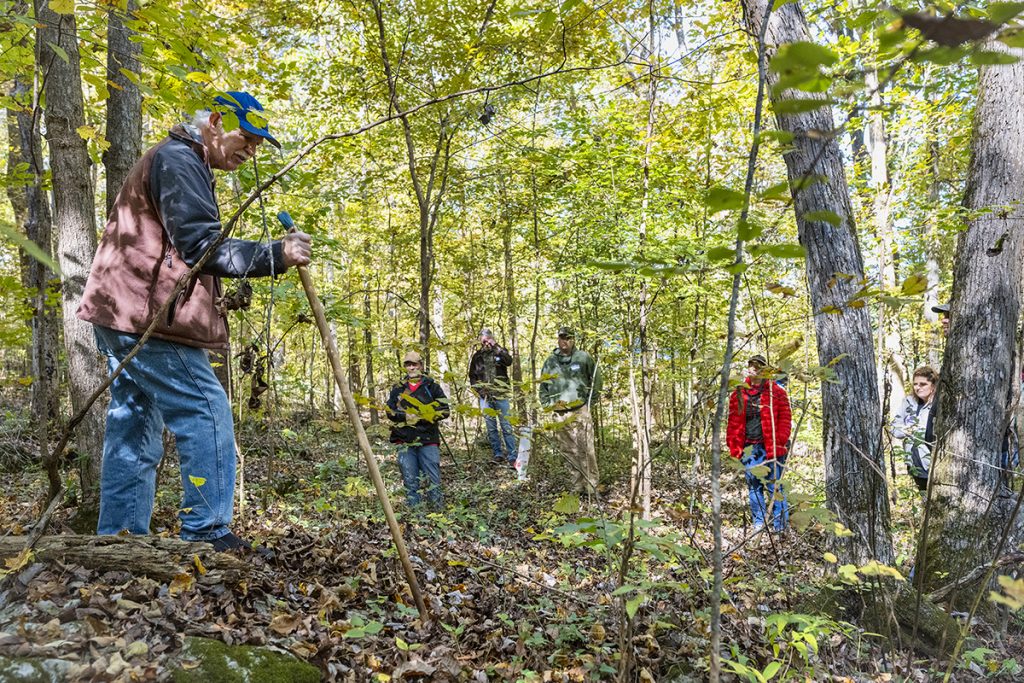 “That’s Eric Burkhart’s mantra and that’s my mantra, too,” said Beyfuss, referring to the prominent Penn State ginseng researcher. “I am obsessed and haunted with ginseng. I think it’s the most wonderful medicine on the planet. It’s going to keep people healthy. … I think the only way that it’s going to remain is if people start growing it.”

“Between all the natural threats to it — climate change, invasive species and what I consider the biggest threat, deer — that we can’t do much about, we need to grow it and that’s the only way it’s going to be preserved year-round,” added Beyfuss, who does not consider poachers a threat to the plant’s existence. 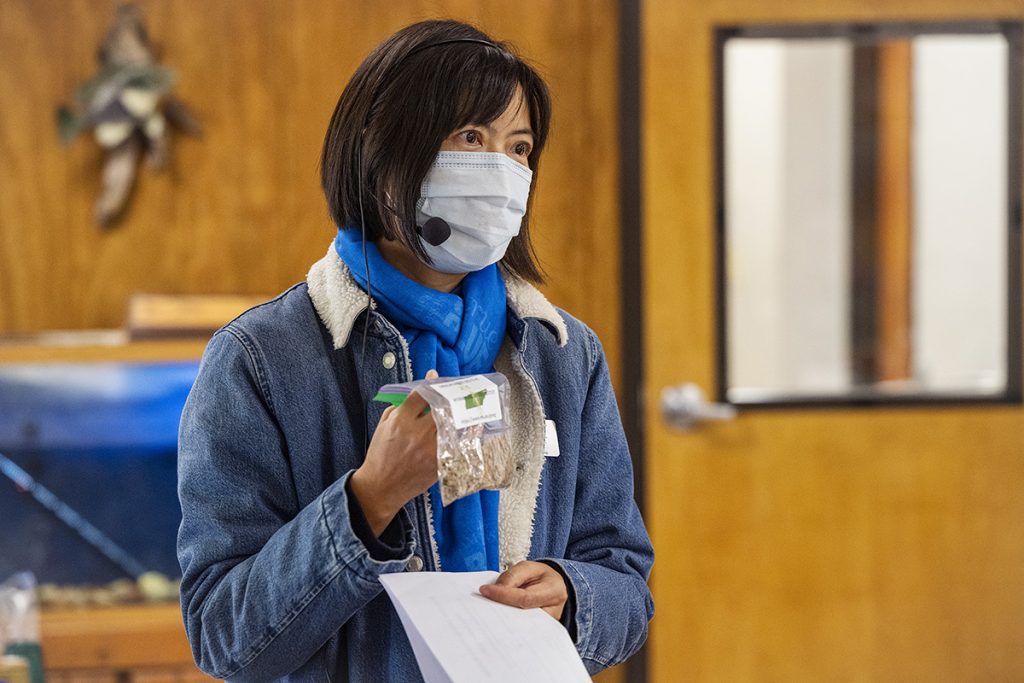 MTSU International Ginseng Institute Director Iris Gao talks about the two ounces of American ginseng seeds that each person attending the 2021 Tennessee Ginseng Growers Workshop received and urges them to plant the seeds this fall. (MTSU photo by Andy Heidt)

Gao said “efforts like this will preserve the plant and restore Tennessee’s ginseng industry.”

The success of the event was made possible by collaboration between the Tennessee Department of Environment and Conservation, Barfield Crescent Park and MTSU, said Gao, adding the presenters shared the latest science, best practices and opportunities related to the ginseng industry.

The ginseng institute will host another fall workshop next year and present at the Organic Growers School in North Carolina in the spring. For more information, call 615-898-2430 or follow on Instagram. 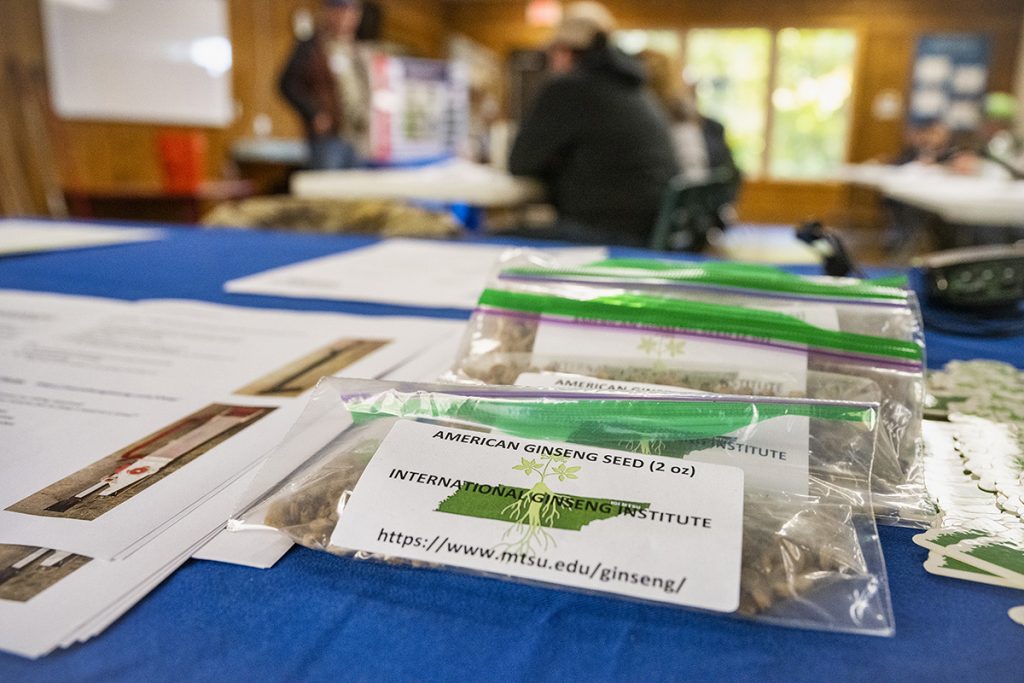 Two ounces of American ginseng provided by the International Ginseng Institute and ginseng expert Bob Beyfuss were given to attendees at the recent Tennessee Ginseng Growers Workshop at the Barfield Crescent Park Wilderness Station. The park and the U.S. Department of Agriculture sponsored the event. (MTSU photo by Andy Heidt)