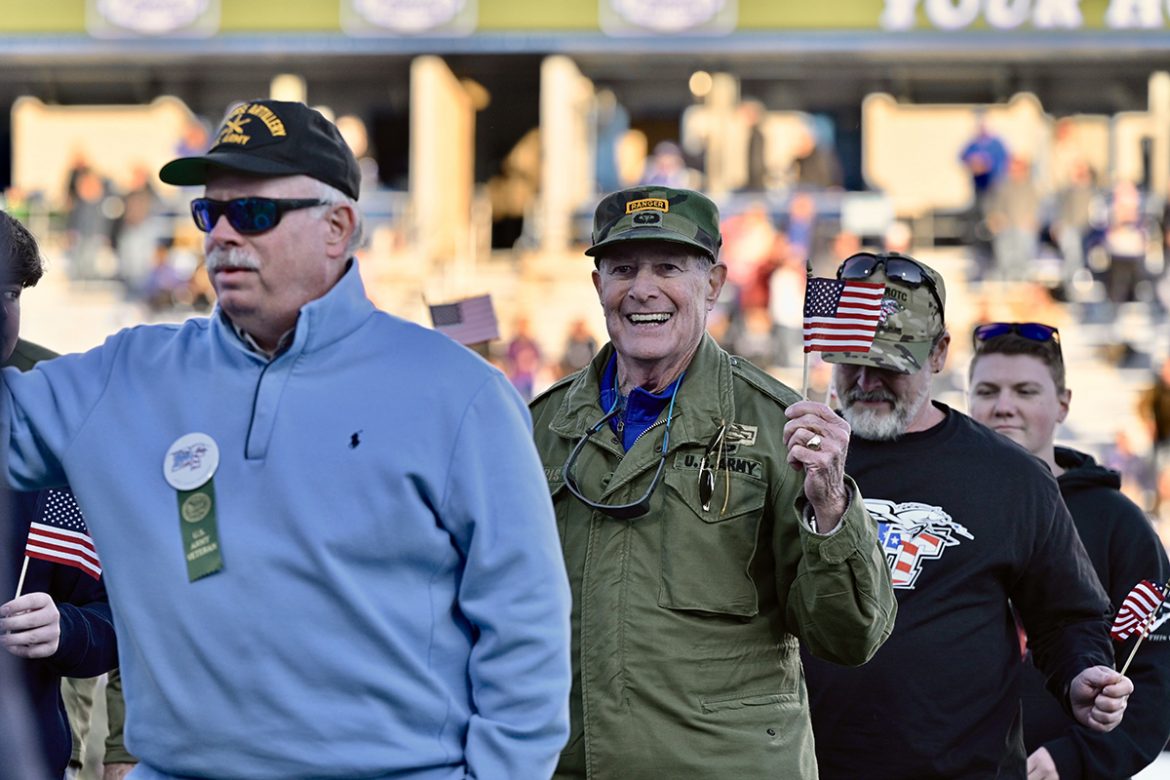 Gabriela Muller and her daughter, Sophia, 8, strolled slowly past the MTSU Veterans Memorial marker featuring 71 names of former students who died serving their country in the military.

Nearby, Joshua Muller — Gabriela’s husband and Sophia’s father — is an ROTC senior cadet who assisted with the breaking down of chairs following a nearly 30-minute memorial service, kicking off the 39th annual Salute to Veterans and Armed Forces game activities. 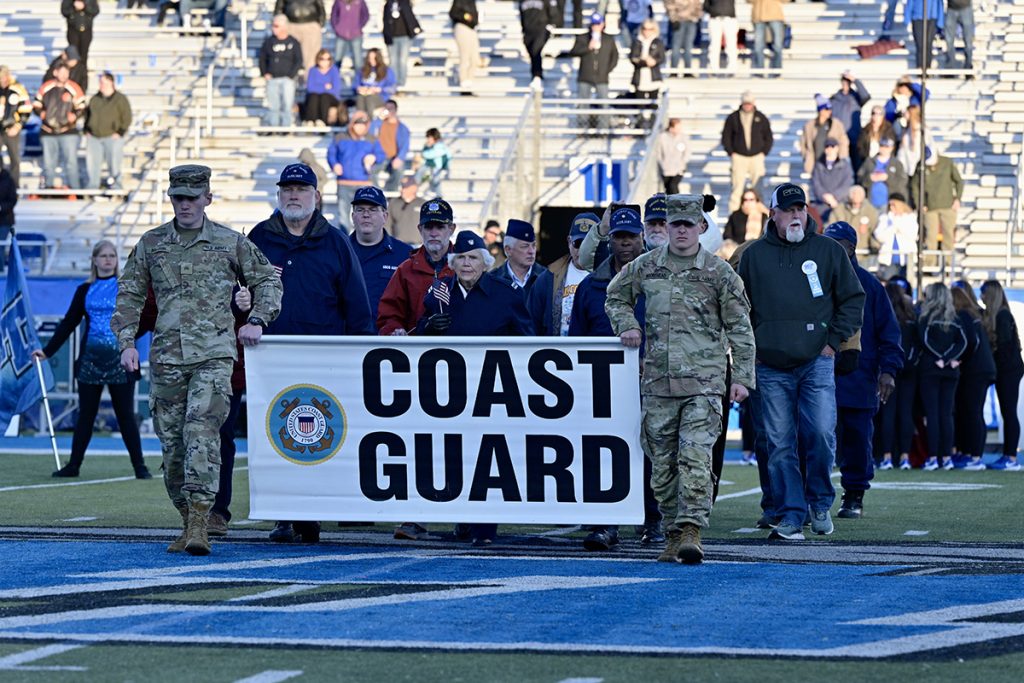 Veterans who served in the U.S. Coast Guard walk behind MTSU ROTC cadets carrying their banner during halftime of the 39th annual Salute to Veterans and Armed Forces game in Floyd Stadium Saturday, Nov. 13. Hundreds of veterans, current service members and their family members were treated to special events throughout the day. (MTSU photo by Andy Heidt)

“Paying homage and respect” is what the day meant to the Mullers. “They made the ultimate sacrifice, to make our life what it is today.”

Joshua Muller, who is scheduled to graduate in May, is majoring in integrated studies (concentration in engineering technology) and earning a minor in military science. 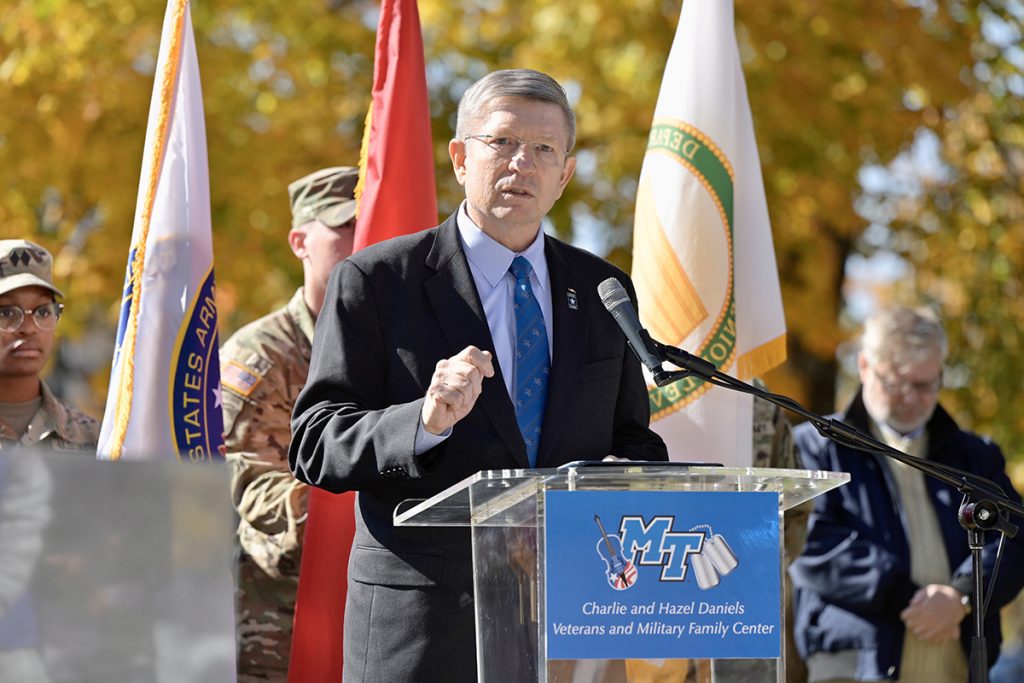 Retired U.S. Army Col. Rickey Smith, president of the MTSU Military Science Alumni Chapter, cited examples of ROTC cadets and 71 students who have made the ultimate sacrifice through the years Saturday, Nov. 13, during the 39th annual Salute to Veterans and Armed Forces memorial service outside the Tom H. Jackson Building. (MTSU photo by Andy Heidt)

Retired U.S. Army Col. Rickey Smith, president of the Military Science Alumni Chapter, told the memorial service audience that “we must work at keeping our military and civilian populations connected as part of the debt we owe those who have given their last full measure in service to our nation. The university activities today for veterans are examples of maintaining the military-civilian connection.”

The service recognized the ROTC program, now in its 71st year at MTSU. 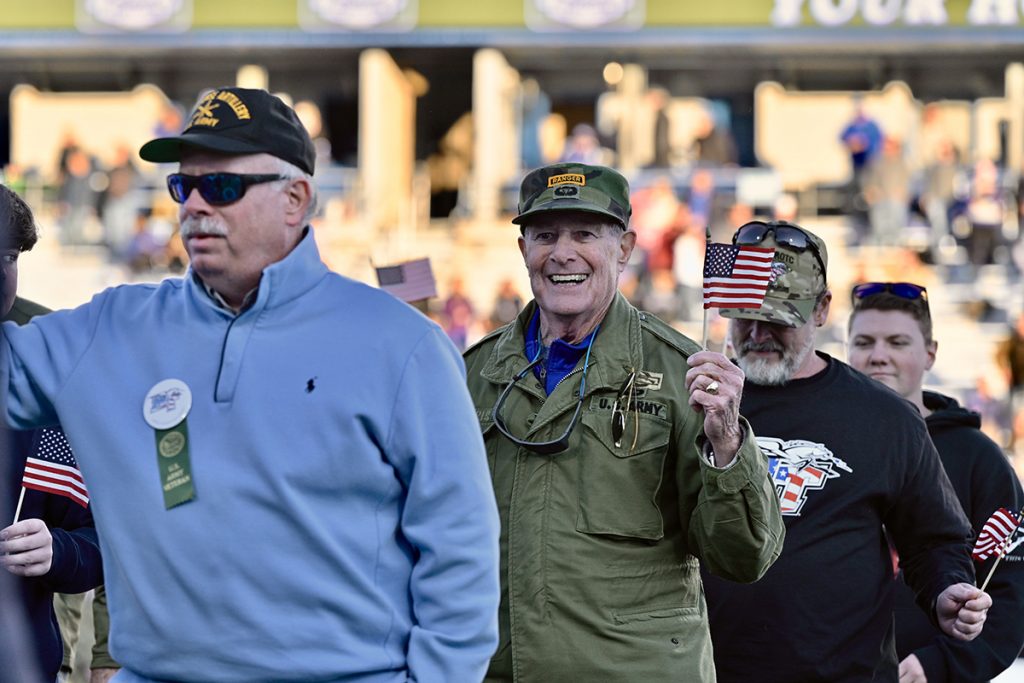 As the MTSU Band of Blue performs the U.S. Army theme, MTSU alumnus and Murfreesboro businessman Bud Morris, second from left, walks across Horace Jones Field at halftime with his fellow Army veterans during the university’s 39th annual Salute to Veterans and Armed Forces activities Saturday, Nov. 13. The MTSU Band of Blue plays theme songs for all five of the military branches. (MTSU photo by Andy Heidt)

Ed Torregano spent 20 years in the U.S. Navy, retiring from intelligence work as a cryptologist. He and wife, Lisa, moved to Murfreesboro from Maryland in 2015 and began attending the Salute to Veterans games.

“We come every year,” Torregano said just after he and his wife and friends John and Francine Hurt, watched the Tennessee National Guard helicopter take off before kickoff. “We enjoy seeing everything … and supporting big Blue.” John Hurt also served five years in the Navy. 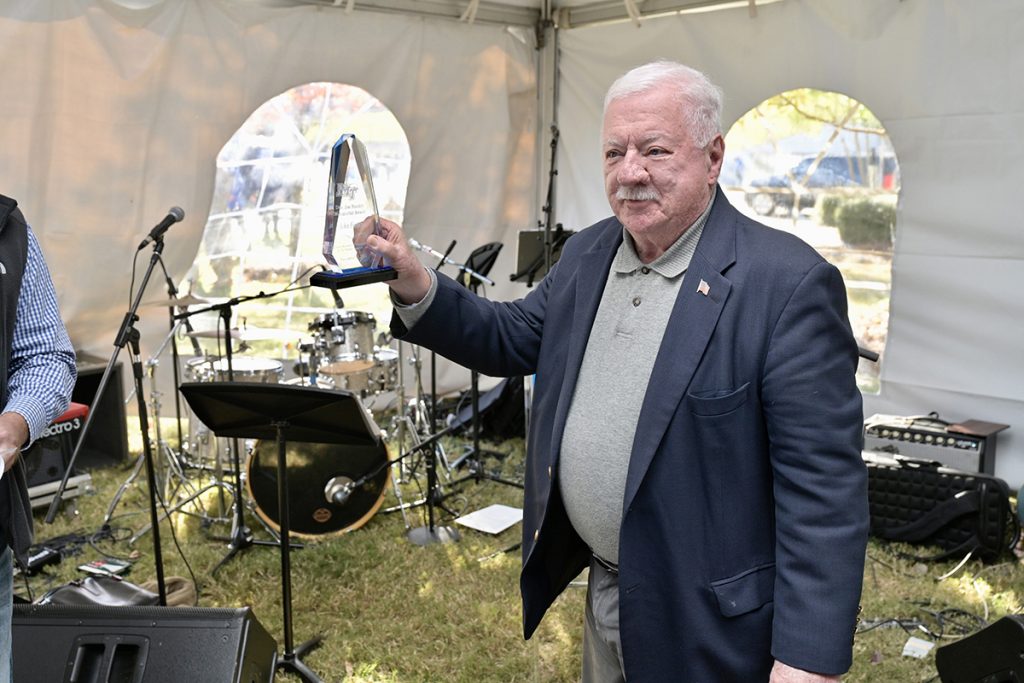 John Furgess, a U.S. Army veteran, MTSU alumni (Class of 1965) and co-founder of the Salute to Veterans events with the late Dr. Joe Nunley Sr., holds the 2021 Nunley Award he received from the committee presenting the honor. He read the entire list of past recipients and told the audience he felt the presence of Nunley and the late Joey Nunley Jr., an MTSU alum and longtime educator who died in April, there at the event. (MTSU photo by Andy Heidt)

John Furgess, who served in the U.S. Army and obtained the rank of colonel serving in the National Guard before working and retiring from the VA, was named the 2021 Joe Nunley Distinguished Veteran Award honoree.

Furgess, 82, and Nunley initiated the Salute to Veterans event at MTSU in 1982.

“This is such an honor. I thought the world of Dr. Nunley,” Furgess said, adding that he appreciates the support for veterans and the event from MTSU President Sidney A. McPhee, who has attended the veterans game and Nunley ceremony every year. 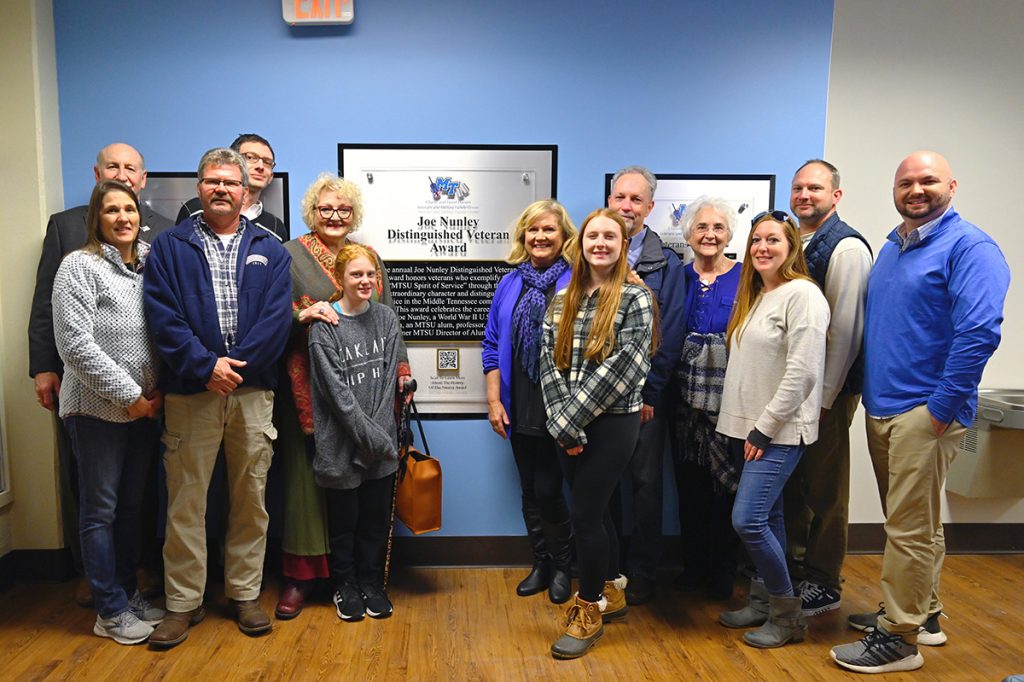 The family of the late Joe Nunley Sr. is shown at the new Joe Nunley Distinguished Veteran Award wall outside the MTSU Charlie and Hazel Daniels Veterans and Military Family Center on the first floor of the Keathley University Center. A ribbon-cutting ceremony Friday, Nov. 12, unveiled the area, honoring past and future Nunley award recipients recognized the annual Salute to Armed Services football game in November. (MTSU photo by Cat Curtis Murphy)

Hilary Miller, Daniels Center director, with help from Ella Grace and Addison Nunley, unveiled the new Nunley Award wall Friday afternoon. The new display is located just down from the first-floor entrance to the Daniels Center inside Keathley University Center.

Thirteen members of the Nunley family came from Atlanta, Georgia, Carmel, Indiana, and elsewhere to attend the ribbon-cutting.

“This wall will ensure that people will be recognized for their (military and civic) achievement,” said Trey Nunley of Lascassas, Tennessee. He is grandson of Joe Nunley Sr., son of alumna Ann Nunley the late Joey Nunley Jr., who died in April, and father of Ella Grace, 11, and Addison, 15. “We’re extremely grateful to the Nunley Award committee, Dr. Miller and the Daniels Center.”

Military Science secretary Nancy Garner was presented with a signed memorial brick for her 40 years of service. It will be placed at the memorial site. 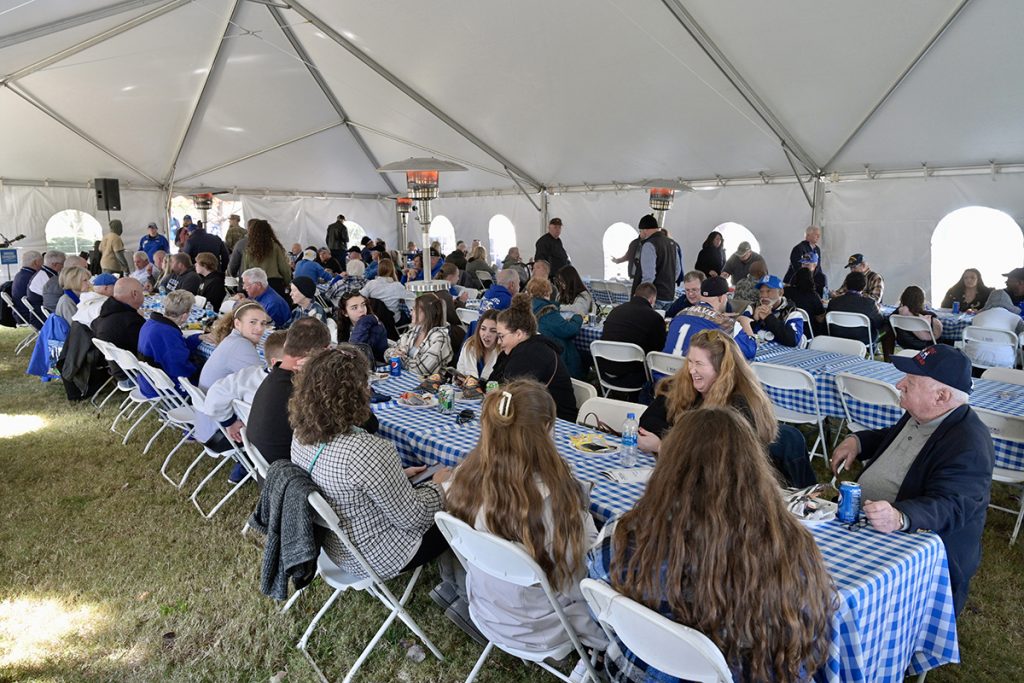 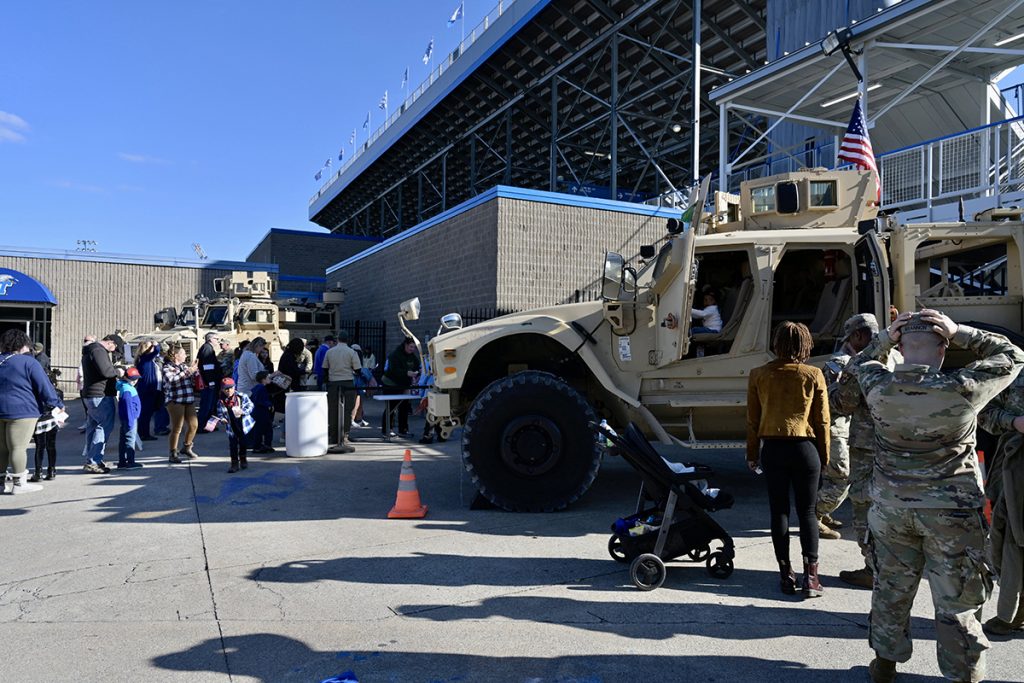