NASHVILLE, Tenn. — Students from Middle Tennessee State University’s College of Media and Entertainment went behind the scenes at the 52nd annual Country Music Association Awards this month to learn from the media professionals staging one of the industry’s biggest award telecasts.

Robert “Bob” Gordon, an assistant professor of television production in the Department of Media Arts, said 11 students served as talent production assistants during rehearsals for the CMA Awards and the telecast at the Bridgestone Arena in downtown Nashville.

Six of the students got a backstage tour and an opportunity to ask questions of CMA CEO Sarah Trahern as well as the telecast’s director and producer. Several also helped as crew for the pre-awards red-carpet show produced by WKRN-TV, Nashville’s ABC affiliate.

“As realistic as we try to make all of our projects at MTSU’s College of Media and Entertainment, they are still college productions,” Gordon said. “There is nothing better for students than to be brought on-site to see how the best in the business work.”

The 2018 CMAs were the fourth such recent up-close opportunity provided for select students through the college’s partnerships and connections with some of the biggest brands in both the recording industry and media arts. 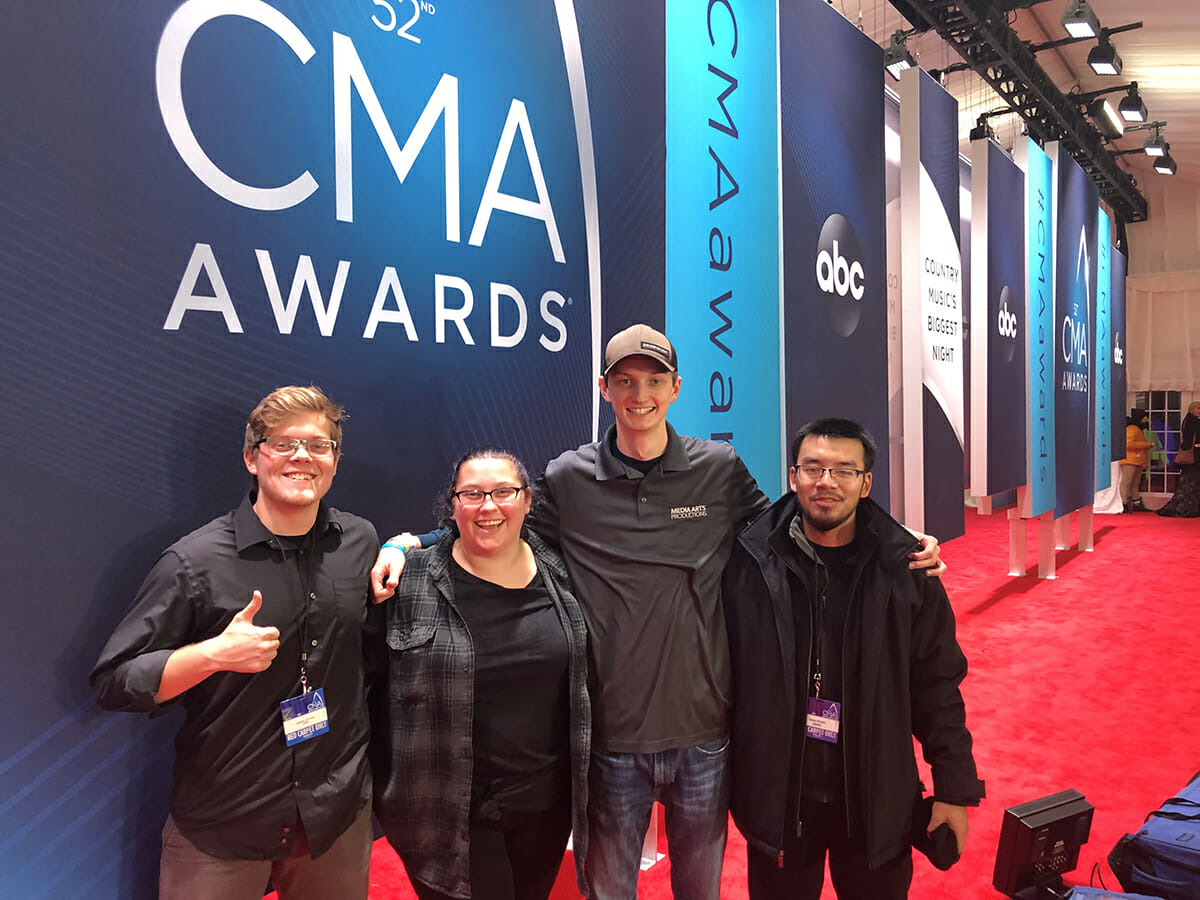 MTSU students Andrew Stephens, left, Madison Stewart, Levi Underwood and Minh Phan pose for a photo behind the scenes of the Nov. 14 telecast of the 52nd Country Music Association Awards. They were among 11 students from MTSU’s College of Media and Entertainment who worked backstage before and during the telecast. (MTSU photo)

MTSU has sent students and faculty to backstage and pre-show events at the Grammys since 2014 and plans another similar trip in February 2019. The college has provided experiential education opportunities at the annual Bonnaroo Music and Arts Festival since 2015 and forged a similar tie with the Academy of Country Music telecast earlier this year.

“Thanks to the excellent work of our faculty, and the ties we’ve maintained with our alumni in these industries, our university has aligned itself with many of the biggest brands in the recording industry,” said MTSU President Sidney A. McPhee.

“These partnerships provide opportunities that are truly transformational for these students.”

MTSU junior Jessica Wong said the CMA experience “was as unreal as it was eye-opening to the possibilities and connections there are in the industry.”

“These are real people dedicating so much to make something to entertain the world,” she continued. “This, along with other things, are the basics that are taught at MTSU, just expanded by a 1,000 percent.“

“This experience allowed me to see and learn more things I hadn’t thought about or didn’t really know. Being a senior, it really opened my eyes even more to take every opportunity given to me, while still being here at MTSU,” Hatfield said.

“I got a lot out of this trip, but the main thing was excitement — the excitement of me improving my skills and knowledge to hopefully be in their shoes and have a successful career in video production.”

Sophomore Jonas Saich said he was awed at seeing all the work that went into the Nov. 14 telecast.

“It was a really rewarding and fun experience,” he said. “A lot of controlled chaos in there.”