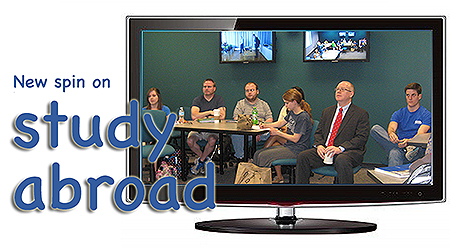 In some college classes, studying abroad doesn’t require a passport, a visa or even a suitcase.

Students in Dr. John Lipinski’s Strategic Management class at MTSU watch a lecture by Lafarge Central Europe CEO Fredric Aubet from the University of Pec in Pec, Hungary. Both classrooms are equipped with screens, cameras and audio equipment. (photo submitted)

The MTSU International Collaborative Online Network was introduced in the spring 2013 semester. It connected Lipinski’s class with a business class at the University of Pec in Pec, Hungary.

The original online synchronous classroom idea was introduced by the Office of International Affairs.

Each group of students can see the other on plasma screens, hear lecturers and ask each other questions.

“This is virtual study abroad,” said Lipinski, an assistant professor in the Department of Management and Marketing. “This is the solution for people who say ‘We can’t afford to go abroad’ or ‘We don’t have the time to go abroad.’”

For example, on April 16, Lipinski’s students were treated to the perspective of Fredric Aubet, chief executive officer of Lafarge Central Europe.

Lafarge is the biggest concrete company in the world.

Speaking from the Pec classroom, Aubet described his company’s venture into Hungary, complete with a PowerPoint presentation visible to students in both countries in real time.

“You don’t learn as well with just the book as you do actually getting to interact with other students from other countries,” said Blake Brock, an entrepreneurship major.

“A lot of us are business majors,” added business administration major Chris Dyer. “We’re probably going to be doing a lot of international business in our lifetime.”

Lipinski will be traveling to Hungary this month to discuss ways to improve and expand on the pilot venture.

“I want the students to do a hands-on project, a real project for a company, just so they can experience some of the demands, some of the challenges of doing a long-distance project,” Lipinski said. “Putting money on the line really changes the dynamics of a project.”

“Dr. Lipinski’s class has served as the successful prototype we hope to expand across the university,” said Dr. David Schmidt, vice provost for international affairs.

“How cool would it be to do a history class on the American Revolution with a British university?” the professor asked.