New roundabout closes some roads for summer on MTS...

New roundabout closes some roads for summer on MTSU campus 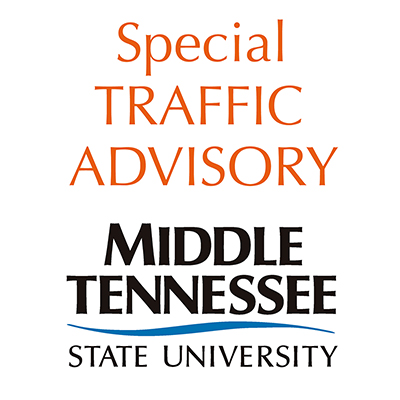 A new roundabout project scheduled to begin this week on the north side of the MTSU campus will require partial closure of some campus roads.

The roundabout will be constructed at the intersection of Champion Way and Lightning Way, said Ron Malone, assistant vice president for events and transportation.

In order for the project to be completed by fall, Champion Way will be closed at Faulkinberry Drive and at the entrance to the Holmes Building. Lightning Way will also be closed at Founders Lane, Malone said.

Access to the north side of campus will remain available via Blue Raider Drive from Greenland Drive.

A map of the road closings may be found at the MTSU Parking and Transportation Services website, www.mtsu.edu/parking under the “Summer 2013 Road Construction” tab, or visit http://bit.ly/mtsu-roundabout-2013. You also can see a close-up view of the affected area at left.

As construction progresses, the university will accommodate summer modifications to the “Green Route” shuttle bus for students. MTSU Parking and Transportation Services will notify the campus of these route changes when they become necessary.

The roundabout project is part of an overall campus improvement plan designed to improve shuttle bus efficiency and traffic flow, relieve traffic congestion, improve pedestrian walkways and lighting, and provide bike lanes into campus and around the perimeter of the academic core.

The four-phase, $30 million traffic plan has already created two roundabouts on campus: Blue Raider Drive at MTSU Boulevard, which was the first of its kind at a Tennessee public university when it opened in 2008, and Blue Raider Drive at Lightning Way at the northwest edge of Scarlett Commons.

Campus officials chose the roundabout route after studying a safety report indicating that roundabouts are safer than traditional traffic circles and intersections, showing about 40 percent fewer collisions and 80 percent fewer injuries to drivers and pedestrians. Other universities with traffic roundabouts include Stanford University, Michigan State, Mississippi State, Virginia Tech and the University of Maryland.

Click on the graphic above for a printable version of MTSU’s summer 2013 campus road closings map.

Work begins this week on a new roundabout at the intersection of Champion Way and Lightning Way. The project will require the partial closure of some campus roads this summer. (MTSU photo by News and Media Relations)