The 825 new graduates of MTSU’s Class of 2021 entered their university years to prepare for the “real world,” unaware that the “real world” would have such a large, and strange, impact on the last 18 months of their studies and lives.

But persevere they did, joyfully celebrating their achievement with family, friends, professors and other supporters inside Murphy Center Saturday, Aug. 7, at the university’s summer 2021 commencement ceremony.

“You learned something very valuable while you were here because you’re sitting here in your regalia. What you learned was not just your academic field; you also learned to do something, and I want you to say it with me,” said guest speaker and MTSU human sciences professor Rick Cottle, leading the new graduates, and then their supporters, in shouting “We showed up. And we did the work.” 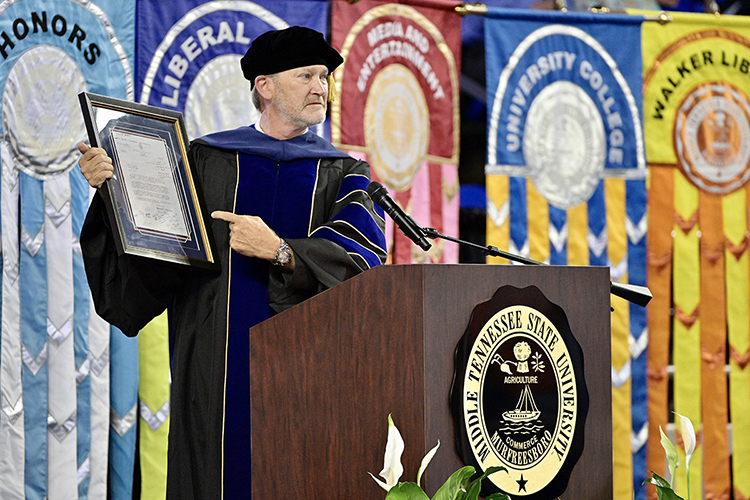 MTSU human sciences professor Rick Cottle, 2020-21 president of the university’s Faculty Senate, holds his framed rejection letter from Auburn University, where he later earned undergraduate and doctoral degrees, while encouraging students to “show up and do the work” at MTSU’s summer 2021 commencement ceremony Saturday, Aug. 7, in Murphy Center. MTSU presented degrees to 825 new graduates of the August Class of 2021 at the event. (MTSU photo by Andy Heidt)

“I’ve found pretty much that life is all about showing up and doing the work,” continued Cottle, speaking on behalf of all the students’ professors as the 2020-21 president of the university’s Faculty Senate.

“I was able to make wonderful connections with staff and students, all while getting an education preparing me for entering the music industry,” Renzi, who also earned recognition as a graduate of distinction from the University Honors College, said of her experience in MTSU’s internationally recognized Department of Recording Industry.

“I wanted to be knowledgeable in all the different roles in recording industry. Learning the inner workings, I’ve discovered it literally takes a team effort to achieve success.”

A video capturing the ceremony is available to watch above. More photos from the event are available here.

Graduates ‘accepted the challenge’ during pandemic

The Aug. 7 event was the second to return to MTSU’s traditional Murphy Center commencement site in 2021. The university conducted virtual graduations in spring and summer 2020 during the pandemic, then held masked and socially distanced commencement ceremonies outdoors in Floyd Stadium last fall.

In May, MTSU held its three-day, 10-ceremony in-person spring 2021 commencement in Murphy Center for nearly 2,500 graduates, limiting students to about 200 per ceremony, limiting their guests to six each and requiring masks and social distancing for all participants. 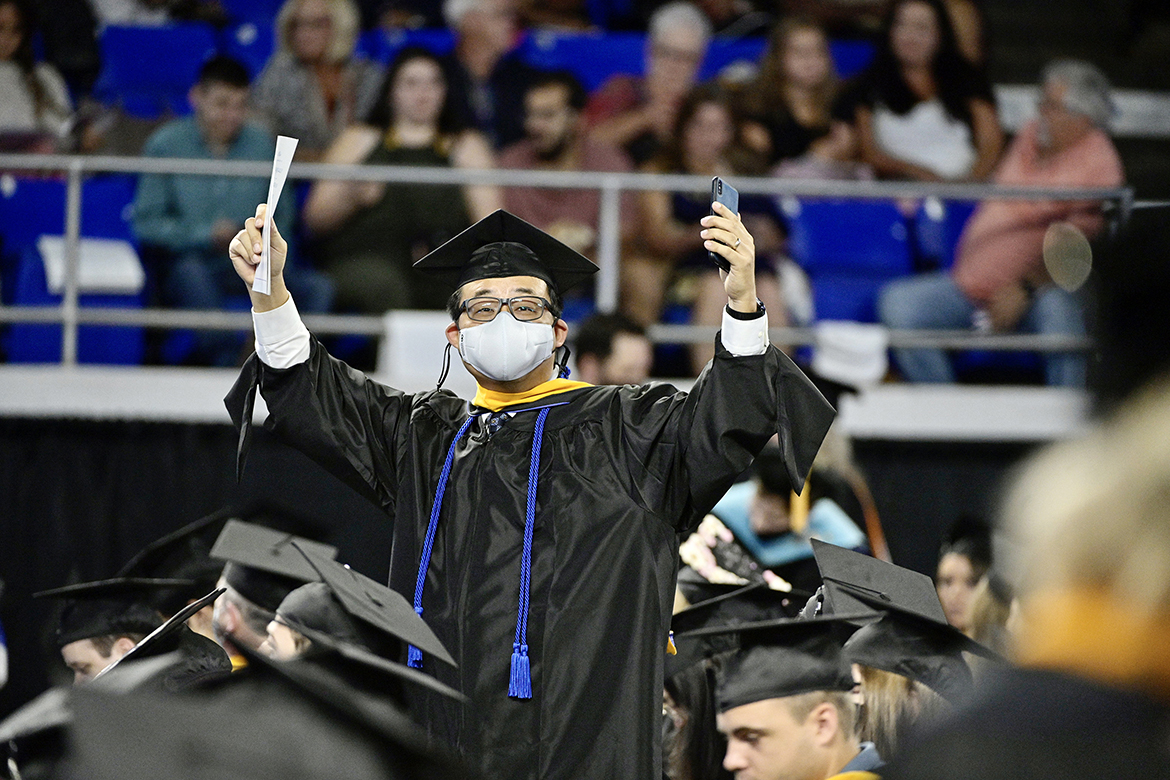 A new MTSU master’s graduate happily celebrates his accomplishment and acknowledges supporters in the Murphy Center audience during the university’s summer 2021 commencement ceremony Saturday, Aug. 7. MTSU presented degrees to 825 new graduates of the August Class of 2021 at the event. (MTSU photo by Andy Heidt)

University President Sidney A. McPhee encouraged but didn’t require attendees to wear masks and stay safely apart for the Aug. 7 event. He commended them during his congratulatory remarks to the graduates.

“I always say that our graduation ceremonies are the most significant events in the life of our university,” he said. “I want to thank everyone for thoughtfully complying with the safety measures we’re taking today to help protect one another and the overall health of our community.

“As I’ve said before, no one could have predicted the enormous impact a previously unknown virus would have on our nation and our global community. I know that many of you would not have chosen to persist through an academic year with so many unknowns, so many changes to your routine.

“Whether you struggled, discovered a new appreciation for the possibilities of remote learning, or surprised yourself by thriving, I know none of it was easy,” the president continued. “That is why I am so grateful that you accepted the challenge with the determination for which our students are known.”

“I have learned a lot about the anatomy and physiology of the human body, as well as a lot of the science behind athletics, exercise and nutrition,” Ball said of his work in MTSU’s Department of Health and Human Performance in the College of Behavioral and Health Sciences.

Cottle reminded the graduates, however, that even the best classroom education can’t fully prepare them for their futures.

“You’re gonna have to learn how to deal with setbacks and with adversity,” the professor said, holding aloft a framed rejection letter from Auburn University that hangs alongside his undergraduate and doctoral degrees from the same college.

“This has my dad’s writing on it. It says … ‘What does he have to do to get in?’ It wasn’t calling up the dean and saying, ‘You need to let my son in there.’  So I learned early on that setbacks can be the best thing that ever happened to you.”

Cottle, an associate professor in the Department of Human Sciences’ Textiles, Merchandising and Design Program in the College of Behavioral and Health Sciences, has worked in the textile/apparel industry for more than 25 years. He teaches basic and advanced textiles courses and apparel-focused business courses at MTSU and stays on top of the industry with his research and expertise in apparel marketing, sizing and 3D body scanning. 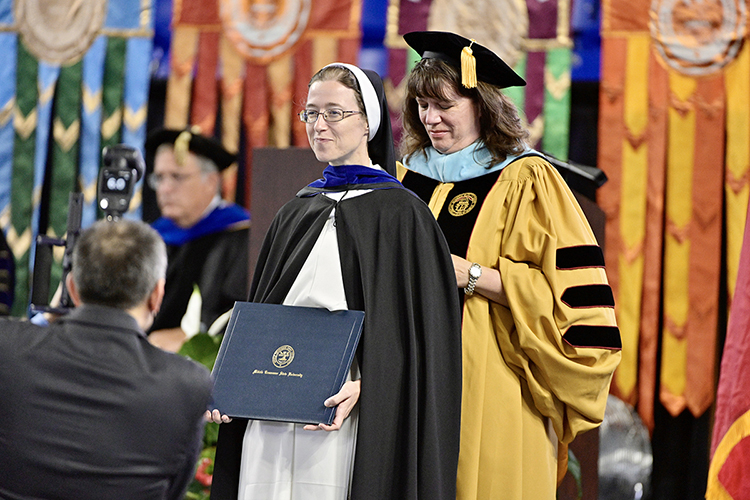 The August 2021 graduating class at MTSU comprises 607 undergraduates and 218 graduate scholars, according to the university Registrar’s Office.

This graduating group from MTSU’s nine colleges — Graduate Studies, Basic and Applied Sciences, Behavioral and Health Sciences, the Jones College of Business, the College of Education, Liberal Arts, Media and Entertainment, the University College and the University Honors College — brought MTSU’s total degrees awarded since its 1911 founding to 171,770. 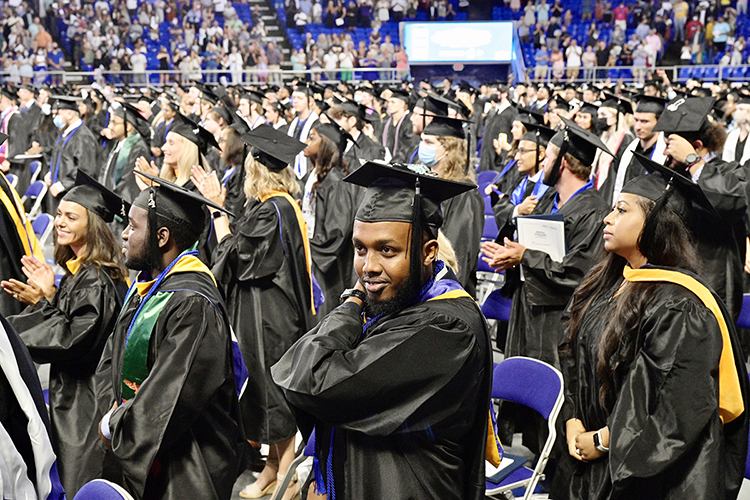 Members of MTSU’s August Class of 2021 applaud their success after they “turn the tassels” on their mortarboards to signify their graduation during the university’s summer 2021 commencement ceremony Saturday, Aug. 7, in Murphy Center. MTSU presented degrees to 825 new graduates of the August Class of 2021 at the event. (MTSU photo by Andy Heidt)

The official summer 2021 commencement program, listing all the graduates by college and noting their honors, is available as a PDF here.

Details for MTSU’s commencement ceremonies each semester are available anytime at https://mtsu.edu/graduation and https://mtsunews.com/graduation-info.

MTSU will formally welcome its new freshman class of 2025 and new transfer students at University Convocation in Murphy Center on Saturday, Aug. 21, at 6 p.m. Central.

That special event will feature youth advocate and U.S. Army veteran Wes Moore, author of MTSU’s Summer Reading Selection, “The Other Wes Moore: One Name, Two Fates,” as guest speaker. It also will air live at www.mtsu.edu/live. http://facebook.com/mtsublueraiders and https://mtsu.edu/TrueBlueTV. 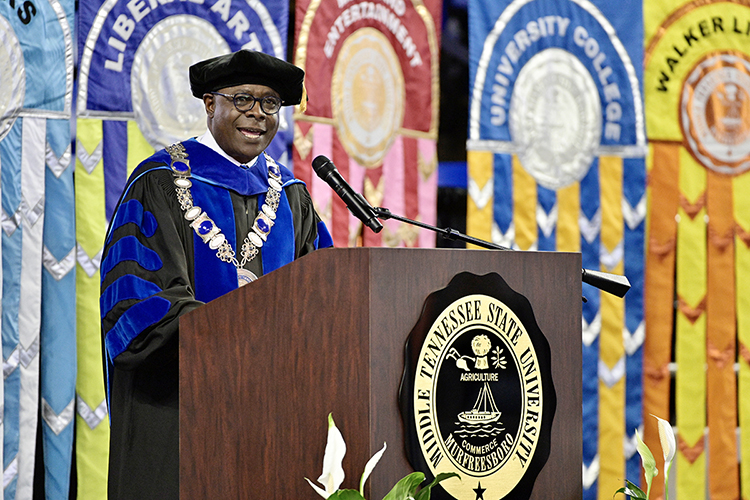 MTSU President Sidney A. McPhee speaks to the August Class of 2021 inside Murphy Center Saturday, Aug. 7, at the university’s summer 2021 commencement ceremony. MTSU presented degrees to 825 new graduates at the event. (MTSU photo by Andy Heidt) 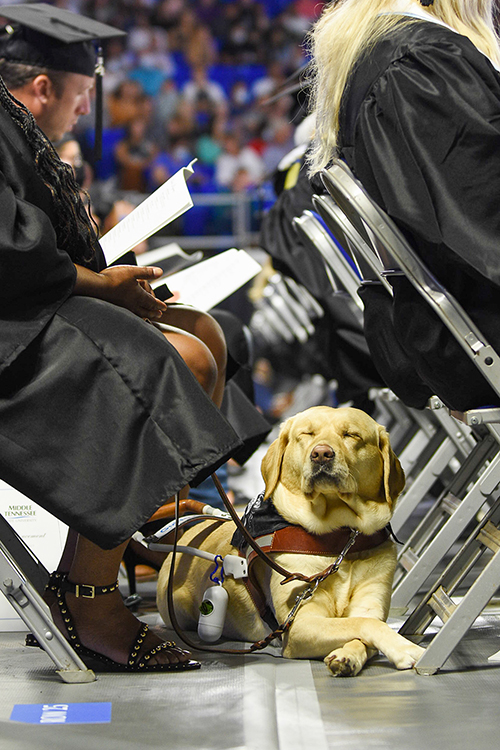 An MTSU student’s service dog, a “Class of 2021” bandanna around its neck, relaxes Saturday, Aug. 7, while waiting to join her in crossing the Murphy Center stage to accept her diploma during the university’s summer 2021 commencement ceremony. MTSU presented degrees to 825 new graduates of the August Class of 2021 at the event; there was no official tally of dog treats distributed. (MTSU photo by GradImages) 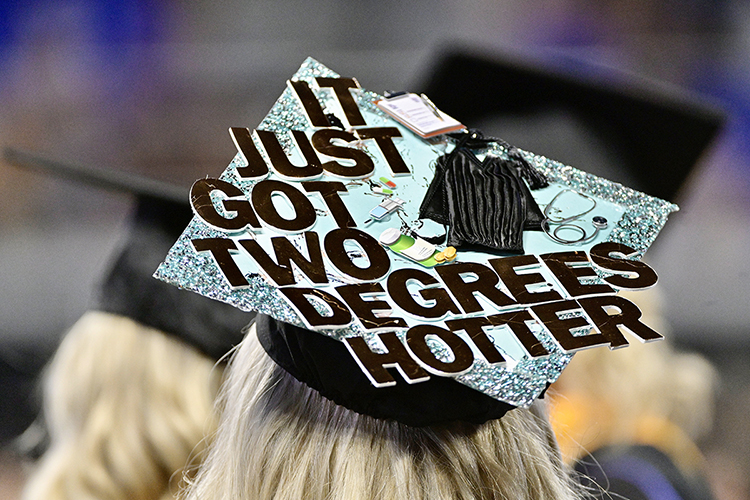 A new MTSU graduate’s customized mortarboard celebrates her accomplishment at the university’s summer 2021 commencement ceremony Saturday, Aug. 7, in Murphy Center. MTSU presented degrees to 825 new graduates of the August Class of 2021 at the event. (MTSU photo by Andy Heidt)