In the News: Higher education,..

Attend the tale of ‘Sweeney Todd’ in MTSU Theatre’...

‘MTSU On the Record’ brings do.. 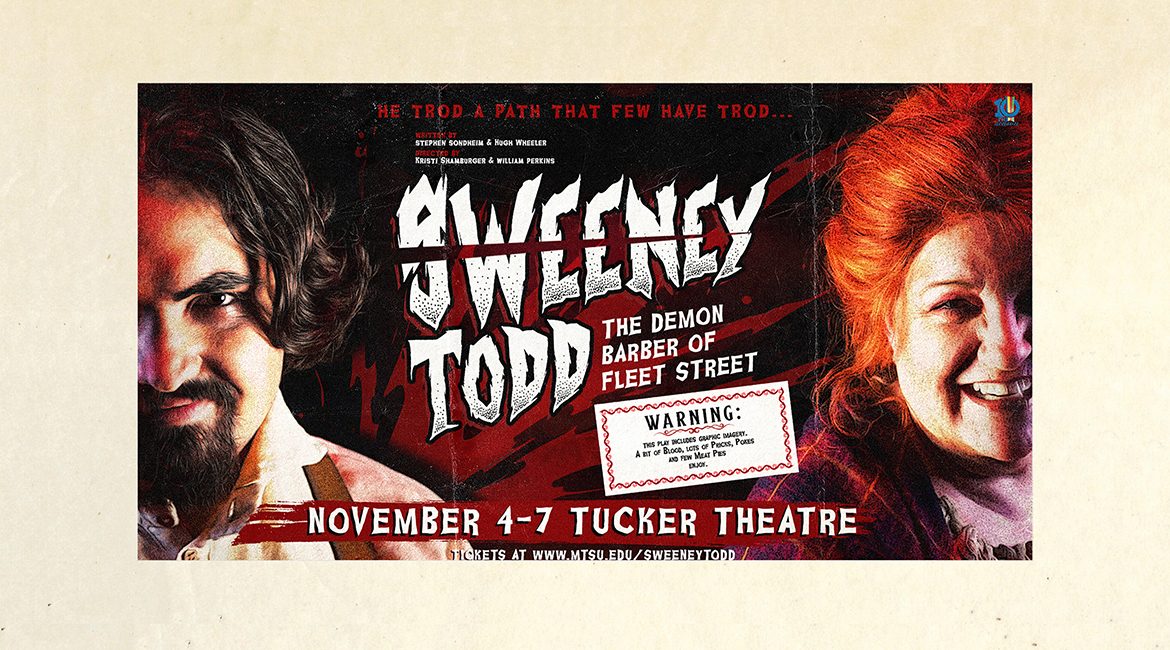 Hungry for some live entertainment? MTSU Theatre students have just the recipe and are saving the best seats — and the choicest cuts — for you Nov. 4-7 in this fall’s Tony and Olivier Award-winning “Sweeney Todd: The Demon Barber of Fleet Street.” 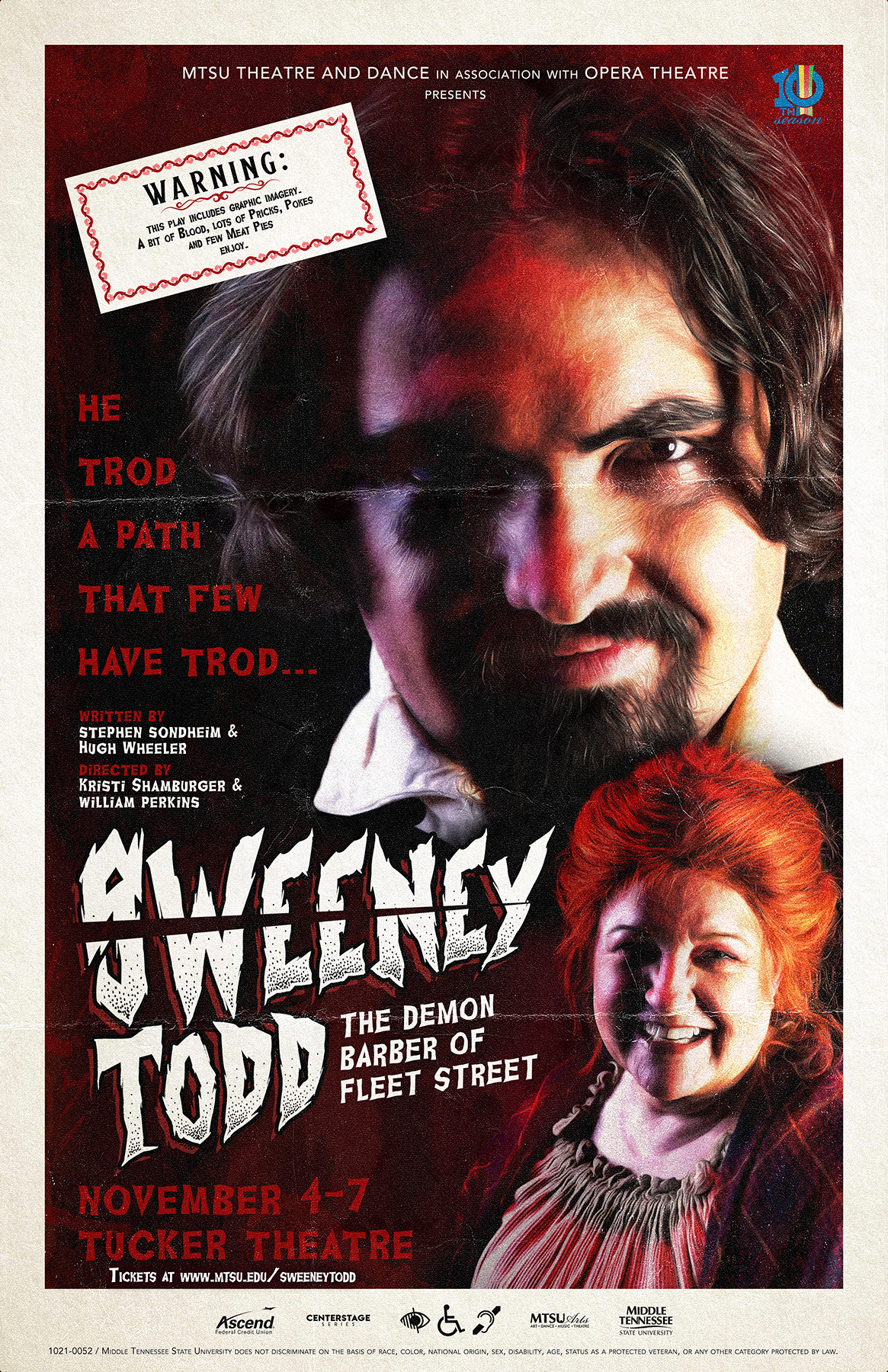 Click on the poster to see a larger version and to buy tickets.

Tickets, available now at www.mtsu.edu/sweeneytodd, are $15 general admission and $10 for K-12 students. Guests can use the coupon code “MTSU” for a 20% discount.

MTSU students, faculty and staff can attend free by presenting a current university ID at the Tucker Theater box office.

Guests must follow MTSU’s mask and other health safety requirements inside Tucker Theatre. The theatre is fully accessible for people with disabilities, including those with hearing, vision and mobility impairments.

“Sweeney Todd,” which first opened on Broadway in 1979 and has seen multiple revivals worldwide along with an Oscar-winning film adaptation, is a gruesome melodrama based on 18th-century tales from the “penny dreadfuls” of serial Victorian fiction.

Sondheim took a 1973 play by Christopher Bond and expanded it into a grisly musical with more than two dozen songs, focusing on a vengeance-minded Victorian barber, unjustly convicted of murder and exiled by a lecherous judge, who returns home after 15 years.

He quickly becomes a real killer and teams up with his landlady, a baker, when she suggests using her meat pies to dispose of the bodies left in his wake.

Department of Theatre and Dance professor Kristi Shamburger, who’s directed MTSU Theatre’s last several seasons of big-ticket musicals, including “Godspell,” “9 to 5: The Musical,” “Joseph and the Amazing Technicolor Dreamcoat,” “Peter Pan,” “West Side Story” and “Les Misérables,” is at the helm of this year’s “Sweeney Todd.”

Her co-director is MTSU School of Music vocal performance professor Will Perkins, an internationally acclaimed tenor and performer who specializes in opera and musical theater.

He directed productions at Indiana University, Sylvia McNair’s Opera Workshop and Brigham Young University before joining MTSU’s music faculty in 2019 as a director of the school’s MTSU Opera Theater.

“We’ve been talking about making this project happen for a couple of years and love getting to share resources from both of our departments!” says Shamburger.

“To do a show with this many musical and technical demands is huge, and we’ve been so thankful for all involved — it is quite a ride!”

“It’s been a fun thing to put together,” adds Perkins. “It was a lot of work to make all the wheels spin the right way, but we are so excited to be working on ‘Sweeney Todd.’

“It’s been really fun for students to collaborate in this new way — for the singers to rub shoulders with people who are acting and moving their bodies all the time in a different way than they’re used to, and for the actors to get a different level of musical training that this show calls for.”

The “Sweeney Todd” MTSU cast includes Max Fleischhacker, a senior theatre major from Knoxville, Tennessee, in the lead role of Todd, and Sandy Flavin, a Master of Liberal Arts student from Hermitage, Tennessee, as his landlady and partner in crime, Mrs. Lovett.

A complete cast and crew list for “Sweeney Todd” is available here.

Because of its theatrical depictions of violence, murder and physical abuse, the show is recommended for audiences of at least high school age. A brief video trailer is available below.

The 2021-22 MTSU Theatre schedule, which is part of the 10th season of the College of Liberal Arts’ “MTSU Arts” brand for the university’s fine arts programs, also includes productions of: 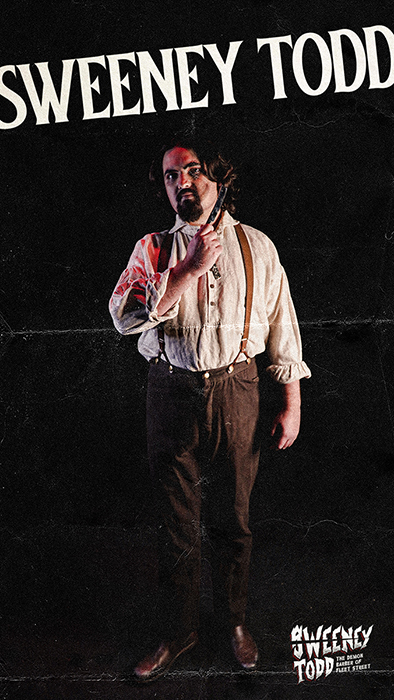 MTSU senior Max Fleischhacker of Knoxville, Tenn., wields his blade in character as Sweeney Todd for the MTSU Theatre fall 2021 production of “Sweeney Todd: The Demon Barber of Fleet Street,” which is set Nov. 4-7 in the university’s Tucker Theatre. Ticket and more show information is available at https://mtsu.edu/SweeneyTodd. (photo provided) 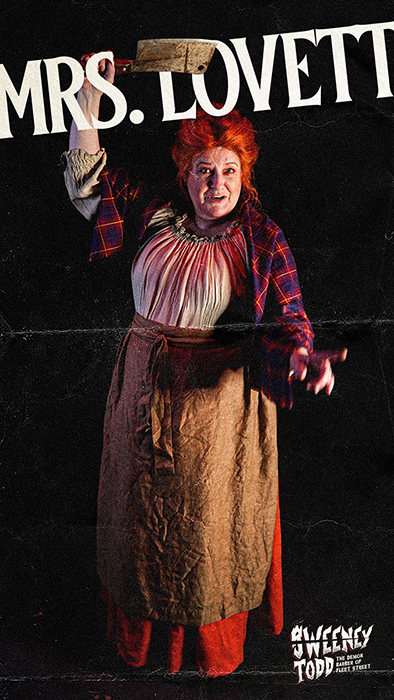 MTSU Master of Liberal Arts student Sandy Flavin of Hermitage, Tenn., raises a meat cleaver in character as Mrs. Lovett for the MTSU Theatre fall 2021 production of “Sweeney Todd: The Demon Barber of Fleet Street,” which is set Nov. 4-7 in the university’s Tucker Theatre. Ticket and more show information is available at https://mtsu.edu/SweeneyTodd. (photo provided)