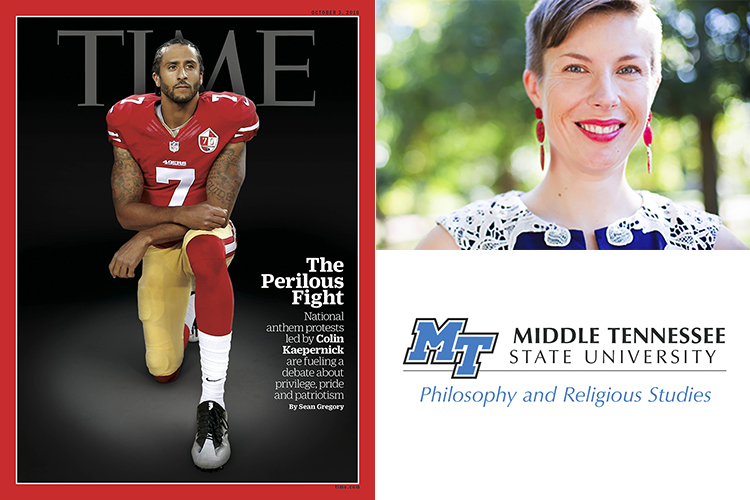 A visiting lecturer at MTSU will use a philosophical lens to focus on an explanation for football fans’ attitudes toward players who protest racism and excessive use of force by police. 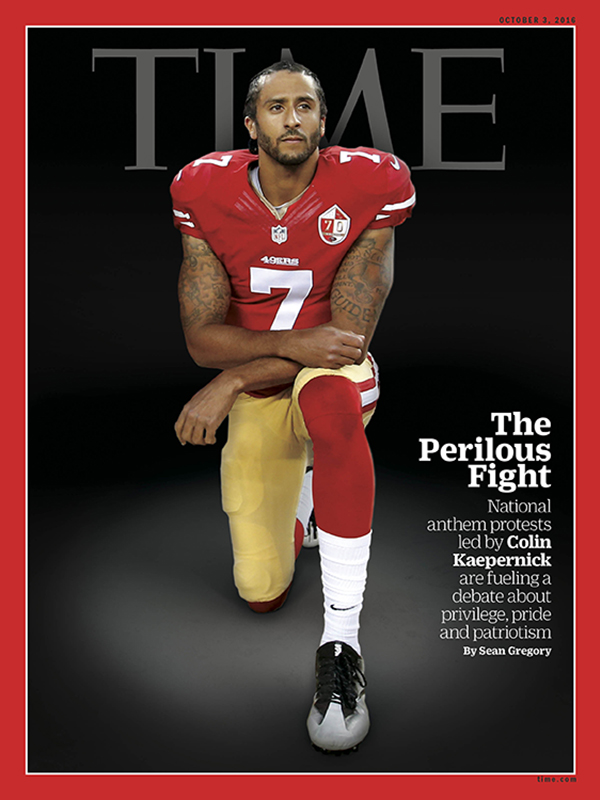 NFL quarterback Colin Kaepernick is depicted on the cover of the Oct. 3, 2016, edition of Time magazine after he and other players began kneeling during the playing of the national anthem at games to protest racism and excessive use of force by police. (Cover courtesy of Time magazine)

Dr. Erin C. Tarver, associate professor of philosophy at the Oxford College of Emory University, will be the speaker at the MTSU Applied Philosophy Lyceum at 5 p.m. Friday, Feb. 15, in Room 164 of the College of Education Building, located at 1756 MTSU Blvd.

A campus map is available at http://tinyurl.com/MTParking. Off-campus visitors attending the event can obtain a special one-day permit at http://www.mtsu.edu/parking/visit.php.

Tarver’s lecture, “Bigger than Football: Fan Anxiety and Memory in the Racial Present,” is the title of her article to be published in a forthcoming edition of the Journal of Speculative Philosophy.

After confrontations between police officers and African-American men in several towns across America, then-NFL quarterback Colin Kaepernick of the San Francisco 49ers and teammate Eric Reid began kneeling in August 2016 during the playing of the national anthem as a protest. Kaepernick opted out of his contract after the 2016 season.

Since no other NFL franchise would sign Kaepernick, the National Football League Players Association filed a lawsuit against the league, claiming collusion among team owners prevented Kaepernick from plying his trade. Reid became a free agent in the 2018 offseason and was signed by the Carolina Panthers.

At a Jan. 30 news conference before Super Bowl LIII in Atlanta, NFL Commissioner Roger Goodell sidestepped questions about why no NFL team has signed Kaepernick. Goodell also dodged questions about reports that music heavyweights Cardi B and Rihanna refused to perform at the game’s halftime show to show their solidarity with Kaepernick.

Tarver’s address will be based on opposing views of football by American philosophers Josiah Royce and George Santayana and on contemporary social science research on the behavior of sports fans.

Tarver’s areas of research specialization include feminist philosophy, American pragmatism and the philosophy of sport. She is the author of the 2017 book “The I in Team: Sports Fandom and the Reproduction of Identity.”

Conceived with Aristotle’s lyceum in mind, MTSU’s Applied Philosophy Lyceum aims to stimulate private reflection and public reasoning. Since its inception in 1992, the lyceum has delved into topics ranging from environmental ethics to theories of love and friendship.

For more information, contact the Department of Philosophy and Religious Studies at 615-898-2907 or Dr. Ron Bombardi, department chair, at ron.bombardi@mtsu.edu.