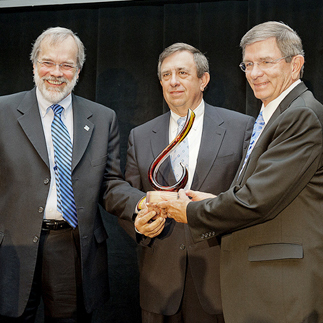 Tennessee Board of Regents Chancellor John Morgan recognized two special sets of friends of MTSU during the University’s April 13 Celebration of Philanthropy: the late Jeff Hendrix and the family of the late Dr. Carl and Jennie Mae Adams.

Tennessee Board of Regents Chancellor John Morgan, left, congratulates Fred and Robert Adams as they accept the Regentsâ Award for Excellence in Philanthropy on their family's behalf at the MTSU Philanthropy Luncheon April 13. (MTSU photo by Andy Heidt)

The Adams family was honored with the Regents’ Award for Excellence in Philanthropy, the board’s highest honor recognizing the unique contributions of select friends, alumni and supporters of TBR institutions.

Hendrix’s family accepted the Chancellor’s Award for Excellence in Philanthropy, which honors supporters whose leadership and financial assistance have been important to the success of the institution.

“Through their personal contributions of time, experienced counsel and yes, dollars, individuals honored with these awards have truly made our state colleges and universities better for our students and faculty,” Morgan said in announcing the honors.

“One of the more significant changes we have seen in higher education over the years has been the increasing role of private contributions to the success of our institutions. Here at MTSU, you not only have the honor of being the institution that helped lay the groundwork for our system of institutional foundations and the cultivation of private support, but you have been an institution that has clearly utilized the generosity of its alumni and friends to have an impact on the total university.”

Over more than 30 years, the family has maintained a strong interest in MTSU and continues to provide support for programs across campus, including Project Help, two endowed scholarships, the Weatherford Chair of Finance in the Jennings A. Jones College of Business, the horse science program and the Blue Raider athletic program.

“For more than 30 years, the University has benefitted from the philanthropic support, active engagement and wise counsel provided by the late Dr. Carl and Jennie Mae Adams, their children—Carl, Fred, Andy, Robert, A.B. and Joanne—and the company Dr. Adams founded, National Healthcare Corporation,” Morgan said. “The combined result of their philanthropic support is substantial and continues to grow each year.”

Hendrix, a devoted Blue Raider supporter whose $1 million estate gift last December was the largest unrestricted donation in MTSU athletics history, was the recipient of the Chancellor’s Award for Excellence in Philanthropy.

“During his more than decade-long association with the University, Jeff, his family and his company, Enterprise Electric, have contributed more than $1.4 million to the University,” the chancellor noted. “Jeff’s contributions supported numerous athletic projects on our campus. … While he loved athletics, he embraced the entire university and was a tireless worker for the betterment of the MTSU campus.”

Among the projects aided by Hendrix’s efforts are renovations to the baseball stadium and the Dean Hayes Track and Soccer stadium, enhancements to men’s and women’s basketball locker rooms, development of a new golf-team training facility and development of a new stadium club at Floyd Stadium, which will bear his name.

“Financial support from alumni, friends and the community has become a vital component of our rich heritage,” McPhee said. “It is safe to say that MTSU would not be what it is today without the leadership and generosity of our donors and friends.”