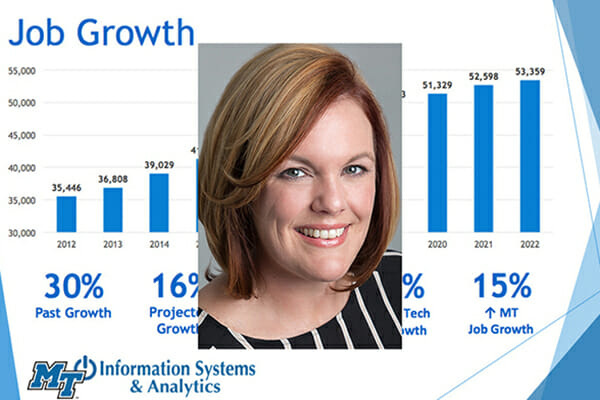 The number of tech jobs has grown in Middle Tennessee by 30 percent since 2012 — double the growth rate for all jobs overall — and is expected to grow another 16 percent by 2022, according to a new MTSU report.

Entitled “The State of Middle Tennessee Tech,” the report was developed by the Department of Information Systems and Analytics in MTSU’s Jones College of Business in partnership with the Nashville Technology Council.

The report includes breakdowns in areas such as tech jobs supply and demand, salaries, diversity, and education pipeline and covers the Nashville-Davidson-Murfreesboro-Franklin and Clarksville, TN-KY metropolitan statistical areas (MSAs). You can find the full report here.

Report author Amy Harris, associate professor in information systems and analytics, says she used a definition of “tech” that “encompasses not only traditional tech occupations, but also analytics occupations that lie at the intersection of tech, mathematics, and business.

“It also captures the tech workers that fuel industries — like health care and entertainment — that serve as the economic backbone of our region,” says Harris, who wants the report to be published annually to keep up with trends.

This chart shows the growth and projected growth in the number of tech jobs as well as growth rates in Middle Tennessee since 2012. (Courtesy of Amy Harris, MTSU)

“While this may make attracting talent from other areas more challenging, it makes a strong financial case that those already living in Middle Tennessee would do well to pursue a tech career,” Harris notes.

• The occupation groups currently employing the most tech workers include business and financial operations analysts, software developers and programmers, and computer support specialists.

• Those occupations are projected to experience continued growth, but the two occupation groups with the highest projected five-year growth are computer and information research scientists and mathematical science occupations.

• Compared to the general working population in Middle Tennessee, the tech workforce has a higher percentage of Asian and white workers and a lower percentage of black and Hispanic workers.

• The report also looked at the educational pipeline for workforce development and discovered that over the past five years, 36 schools in Middle Tennessee and the surrounding area produced graduates relevant to tech occupations.

• In 2017, students completed degrees relevant to tech work across 50 academic programs for a total of 3,670 completions, with MTSU having the most completions with 731 students earning degrees in relevant programs.

For more information about the Department of Information Systems and Analytics in MTSU’s Jones College of Business, go to https://mtsu.edu/isa/index.php.

This chart breaks down age, ethnicity and gender diversity with the Middle Tennessse tech workforce. (Courtesy of Amy Harris, MTSU)