4 Ways to Recharge Your Brain .. 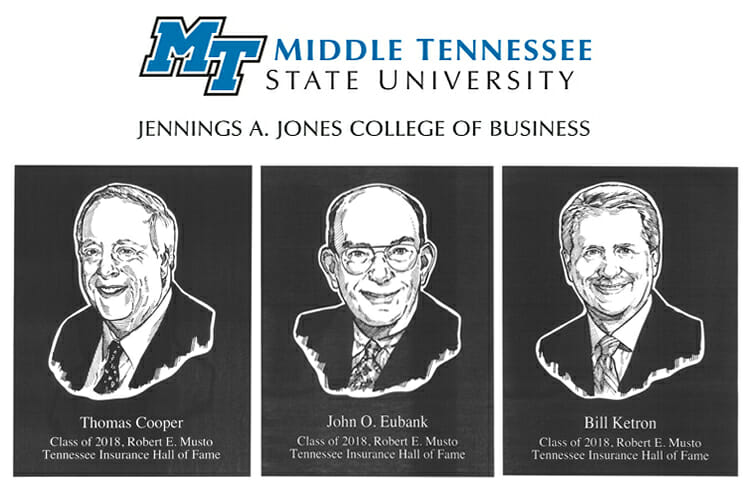 The inductees into the 2018 class are Tom Cooper of Germantown, Tennessee; the late John Eubank of Nashville, Tennessee; and Bill Ketron of Murfreesboro.

An induction ceremony was held Sept. 20 at the Embassy Suites Hotel and Conference Center in Murfreesboro.

“These three insurance professionals have set themselves apart through their service to others,” said Dave Wood, holder of the Tommy T. Martin Chair of Insurance in MTSU’s Jones College of Business. “Their accomplishments are an example for all of us, and especially our students, of how to make a difference in this world.”

Cooper, who formed the Cooper Agency in 1977, is lauded for his membership on the Million Dollar Round Table for more than 35 years and for serving in leadership positions at the local, state and national level within the National Association of Insurance and Financial Advisors, including 10 years as the national committeeman for NAIFA-Tennessee.

An avid sports fan, Cooper has also been active in his community, assisting with the founding of the Christian Brothers University Sports Hall of Fame, serving on the AutoZone Liberty Bowl selection committee for two years and on the board of the Memphis Touchdown Club for more than a decade.

Eubank, who died in 2017, was president and CEO of Professional Insurance Education Inc., which he formed in 1987 as part of a 55-year insurance industry career. He was recognized nationally as a premier insurance educator, having served as a National Faculty member of the Society of Certified Insurance Counselors since 1976 and being a recipient of the Professional Leadership Scroll from the American Institute for Property & Liability Underwriters and the Insurance Institute of America.

Called “a trove of historical information on the insurance industry,” Eubank is praised for the “thousands of seminars and webinars he had conducted across the country” as part of his insurance education work for insurance associations in Alabama, California, Florida, Georgia, Illinois, Indiana, Kansas, Kentucky, Louisiana, Mississippi, Ohio, North and South Carolina, Tennessee and Virginia, along with other professional groups.

Ketron, who now serves as Rutherford County mayor after 15 years as a state senator, is a second-generation insurance professional. He was trained by his father, Bill Ketron Sr., and operated Universal-International Inc. before being elected county mayor this year. He is touted for his legislative work in support of the insurance industry during his time in the General Assembly, recently starting the Stroke Registry Task Force to standardize how first responders would aid stroke victims.

An MTSU alumnus, Ketron has been active in a variety of community organizations, ranging from the National Exchange Club, where he served as president, to the Blue Raider Athletic Association, an organization he co-founded. He currently serves as a board member of the Rutherford County Convention and Visitors Bureau and Bradley Academy.

With this year’s class, the Insurance Hall of Fame will have inducted 68 members since its inception.

The Hall of Fame is named for the late Robert E. Musto, longtime vice president of the National Life and Accident Insurance Company. All of the inductees are listed here: www.mtsu.edu/martinchair/inductees.php

MTSU offers a degree in risk management and insurance through the Department of Economics and Finance within the Jones College. For more information about the Risk Management and Insurance Program, go to www.mtsu.edu/rmi.