Online Tutoring: One of MTSU’s..

The Art of Sound: Teaching filmmaking in the age o...

The Art of Sound: Teaching filmmaking in the age of coronavirus 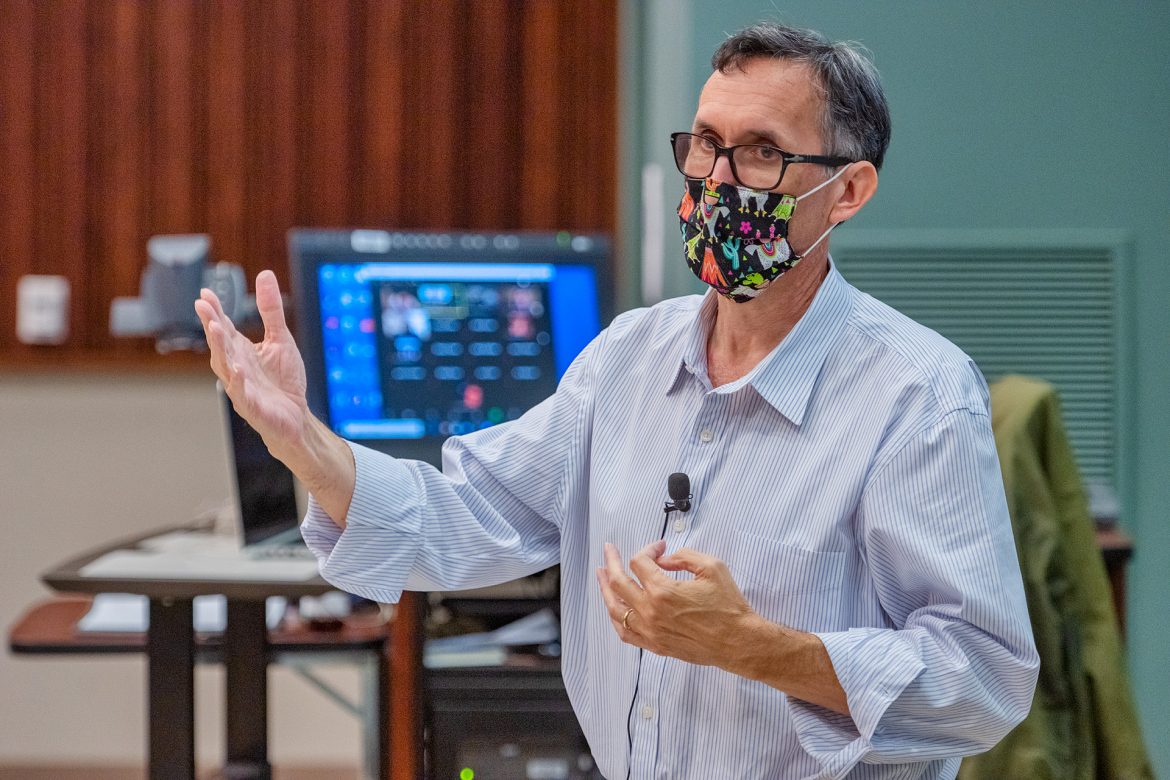 Lecturer of media arts Rick Hinson waited six weeks after he relocated from Los Angeles to Middle Tennessee to tell his employer he had done so.

“We had been wanting to get out of L.A.,” says the four-time Emmy-winning sound designer. “At some point, I realized I was already working from home, so it shouldn’t really matter whether my home was in Hollywood or elsewhere. Both of our kids went to Vanderbilt, and my wife and I loved Middle Tennessee. So coming here was a goal of ours.”

When MTSU called two years ago with the prospect of him teaching in Murfreesboro, the 30-year veteran of the film and TV industries mentioned he’d have to talk it through with his wife, also a Hollywood veteran.

“I told MTSU that before I could say ‘yes,’ I’d have to talk to my wife, who is a screenwriter,” Hinson says. “[MTSU’s representative] said, ‘Actually, we need one of those, too!” 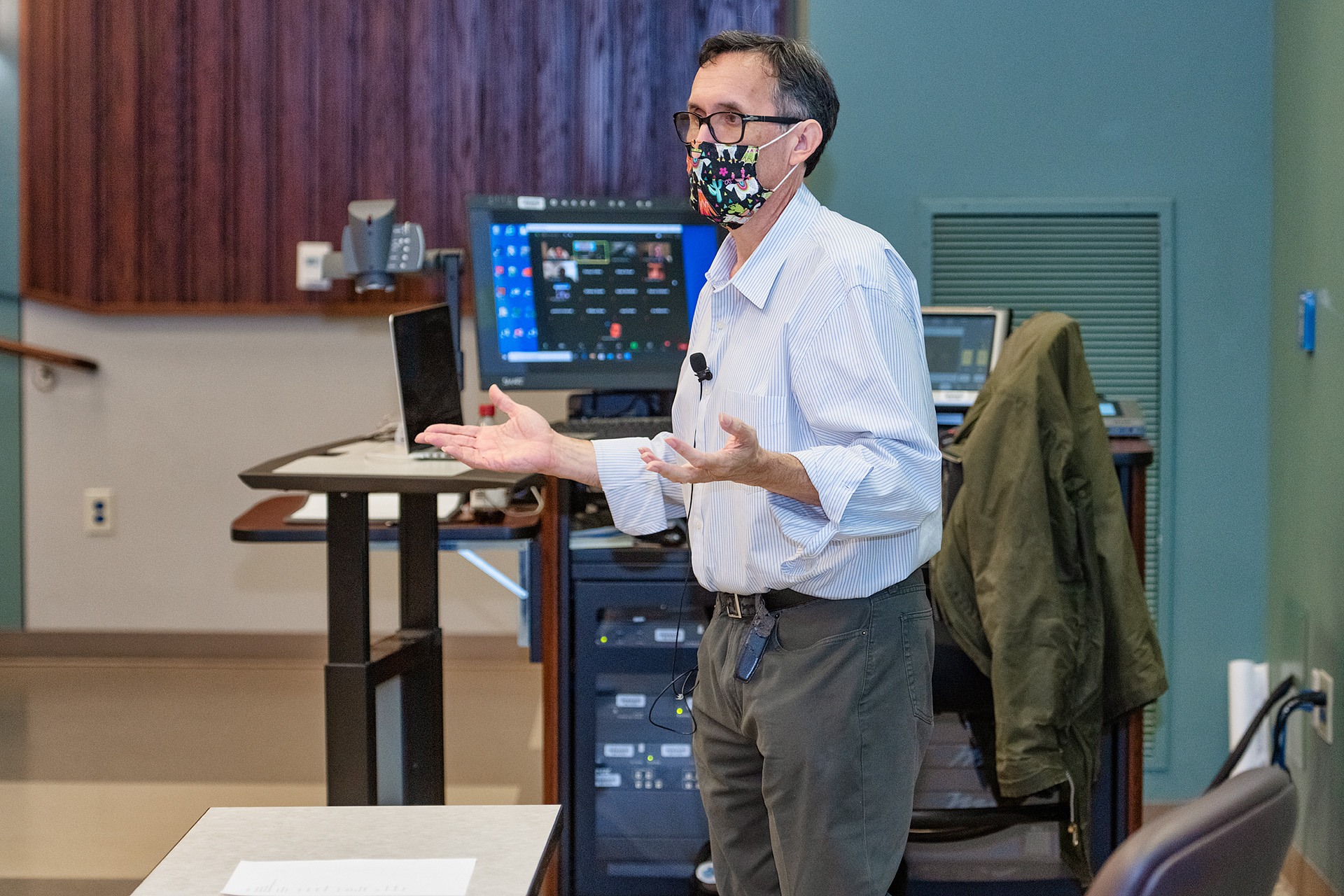 They commuted the first month of fall 2018 semester (late August–September), then moved, then told his California employer in mid-November.

“I never told them we were moving and I just kept working,” he says, laughing. “Then, in mid-November, I asked them whether they had noticed a difference in my work? They said, ‘No, everything’s great. Why?’ ”

Hinson counts among his credits, HBO’s mega-hit The Sopranos, Fox’s X-Files, “and lots and lots of kids’ shows,” including several Disney TV shows and the time-travelling educational show Dinosaur Train. He and his wife, Libby Hinson, an adjunct professor of media arts at MTSU with two Emmy awards, each graduated from University of Southern California’s esteemed School of Cinematic Arts.

When the deadly pandemic reached Middle Tennessee last spring, Rick felt the students’ hands-on portion of the classes wouldn’t be adversely affected, since he had scheduled most of those portions of his curricula for earlier in the semester. The two rounds of student projects, however, took a direct blow.

“We had to adapt the team-project assignments, which they were halfway through when the pandemic hit,” he says. The solution he came up with for the partially completed films was to deploy a device used during film restoration when a film segment might be missing. “The restorers use ‘slugs’ to tell the audience what should have happened at this juncture of the film.” 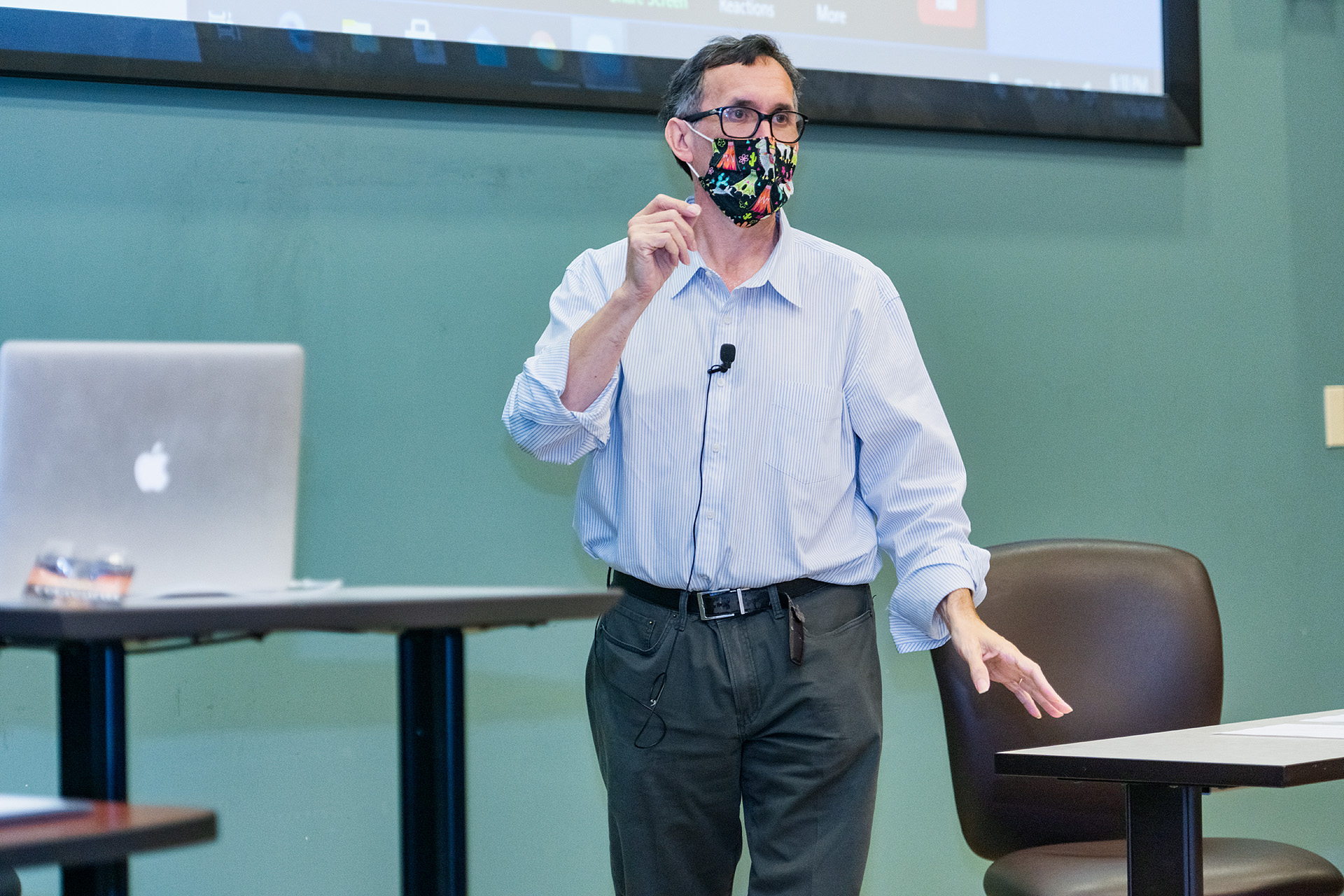 For their final project, he offered the students two options. Since many of them had returned to their parents’ homes, he asked them either to use their family as actors, or utilize a “found-footage” technique.

“For this, they would find footage on the Internet [or elsewhere] and turn it into something completely different,” Hinson says. “The idea isn’t to edit the film to tell the same story differently; it’s to use the footage you find and turn it into a completely new movie. It’s a way they can work on filmmaking without doing any filming.”

For example, one of the students used footage from animated Disney films.

“I would describe the film she made as a piece of visual poetry,” Hinson says. “She made a visual flow from [a sequence from one film] to the next. So, a character from one film might jump off a rock then an eagle might replace that character but following in the same motion, then a surfer might take that over, and so on. She put music behind it, and it was truly a piece of visual poetry. The end result really was good; I raved all over it.”

And since the remainder of the spring semester would be virtual, he found a way to leverage his industry contacts for the benefit of the students. He carried the practice over to the fall semester, too.

“Since so much of what we’d be doing would be remote via Zoom or a hybrid of in-person and remote, I thought it would be great to get some of my industry connections to interact directly with our students,” he says.

Those who have “visited” the class include Bobbi Banks, the first African-American president of the Motion Picture Sound Editors and editor of Straight Outta Comptonand Selma; Solange Schwalbe, a foley supervisor whose credits include Pirates of the Caribbeanand Moneyball; and Jon Taylor, a re-recording mixer with four Oscar nominations. He also invited Peter Kurland, who heads the local International Alliance of Theatrical Stage Employees, a labor union representing over 140,000 technicians, artisans, and craftspersons in the entertainment industry. Kurland discussed the practical matter of getting jobs in the industry.