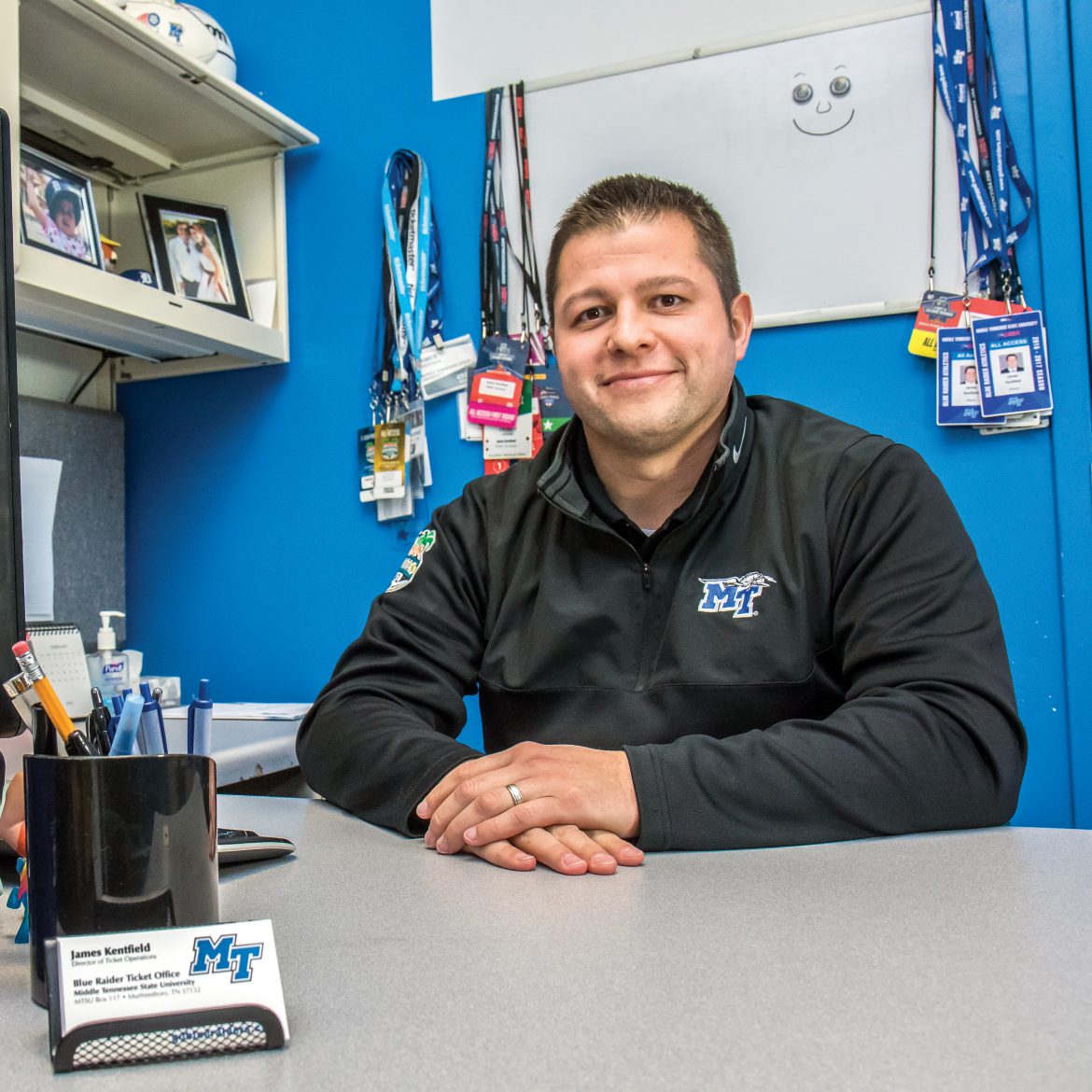 Looking for a sporting event to attend in Murfreesboro? James Kentfield has just the ticket

James Kentfield, director of ticket operations at Middle Tennessee, began his career in the NBA, serving in different ticket operations and sales positions with the Orlando Magic and New Orleans Hornets. Having seen the business approach to professional sports, Kentfield was eager to work in an environment where people are deeply invested in a university setting. Now at Middle Tennessee, the Michigan native is responsible for the day-to-day activity in all facets of the Blue Raider ticket office. Kentfield has served in the MT athletic department for nearly seven years.

“I loved working in the NBA. However, I was missing something,” he said. “The connection I was seeking in sports; I didn’t feel it in professional sports. It felt so much more like a business.” With an athletic ticket office being one of the first impressions a fan may have with a college program, Kentfield and his staff are committed to building relationships with Blue Raider fans and ensuring they have the best experience possible.

“We try to make the whole ticket buying experience a smooth process, and we let everyone know how accessible we are,” Kentfield said. “The ticketing world has changed so much since I have been here. There have been so many advancements from buying tickets online and printing them at home.”

Kentfield and his staff also work closely with different departments across campus. From BRAA to Marketing to University Alumni Relations and the president’s office, Kentfield strives to foster relationships in order to promote the Blue Raider brand.

“It’s definitely not just waiting for the phone to ring. We are working with the BRAA to find the right ticket package for members,” he said. “Maybe not everybody can come out for a full season or commit to all of the sports, but we definitely try to work with different departments across campus to get our promotions and our word out. We’re constantly maintaining and growing relationships on campus to get people to our sporting events.”

With a rapidly growing city such as Murfreesboro, one of Kentfield’s biggest challenges is promoting MT sports to people who may not be familiar with the Blue Raider brand. One approach to reaching the community is adding value to ticket packages, as well as making other Blue Raider sports more enticing.

“We want to make our Blue Raider brand as accessible to as many fans as possible. Offering sports such as softball, volleyball, soccer, and track and field events free to the public allows the casual fans to come by and check out the Olympic sports and not have to charge them $4 or $5 a ticket,” he said. “We want to be fan-friendly, and allowing some of those sports to be complimentary admission is within our goals of becoming just that.”

Kentfield emphasized that the most important way to support Blue Raider athletics is to buy season tickets and attend games regularly.

“As cliché as it sounds, getting out here and supporting our student-athletes who are wearing the MTSU jersey every day and representing this University and this great city, it’s so important for those kids to look up in the stands and see fans out there supporting them,” Kentfield said. “Having our fan base grow as the city of Murfreesboro grows is what we need to focus on and getting people to our stadiums and our arenas.”

As his eighth year on campus approaches, Kentfield is proud to serve in the Blue Raider athletics office and to have found a special connection to sports. And for Kentfield, it’s the people, he said, who make it special.

“There are people who for generations have been Middle Tennessee fans. That’s something you’re raised with, and it’s something that is a part of you,” he said. “Being here and seeing the fans who graduated 30, 40, or 50 years ago and are still passionate, and their children and grandchildren who will soon be going to Middle Tennessee, that’s something very special to be a part of, to have that connection.”