The Holocaust in the Classroom

Archaeologists postulate that Spanish explorer Hernando de Soto visited the Chattanooga area more than 450 years ago. Evidence suggests Soto probably visited the chiefdom of Coosa in the Moccasin Bend area around the year 1540 in the midst of his three-year search for gold, silver, and jewels across the southeastern United States, an expedition that ended for de Soto when he died of fever in either what is now Arkansas or Louisiana.

The proof is in the soil. Metal artifacts, indicative of either Spanish contact or at least trading with people that traded with Spaniards, have long been uncovered in the area. So, too, have maritime artifacts—gastropods and whelk shells and such—that obviously came from the Gulf of Mexico and are not native to Chattanooga. 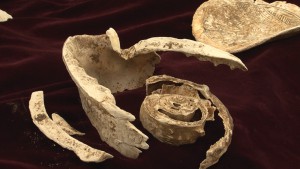 One MTSU professor was recently granted access to artifacts from a late prehistoric/early contact period site on a private residence in Chattanooga that adds to the body of evidence suggesting Spaniards traveled through the Tennessee region and traded with local Native Americans. Her analysis was time-limited, though, as the artifacts are soon slated to be reburied or, said another way, repatriated to the Muskogee (Creek) Nation under the Native American Graves Protection and Repatriation Act.

Dr. Tanya Peres, associate professor of anthropology, recently studied various pieces of Native American craftsmanship from the Chattanooga site in her Peck Hall archeology laboratory. The pieces are important because many of the sites from the same period have long since been looted or were excavated in the 1800s by antiquarians who were not trained professional archeologists. Other sites have been destroyed by urban development, railroad construction, or road construction. This site, however, was preserved because it was on private property. When the landowner wanted to sell the property to a private corporation, Tennessee State Burial Law required human remains on the site to be relocated, which was done at the landowner’s expense. But because the owner knew there was an archeological site there and that this was a potentially important area for research, he hired an archeological firm to do the burial removal instead of a funeral home. Peres first got involved when a private consulting firm contacted her about doing analysis of animal remains from the mortuary contexts before they were reburied.

Some of the items uncovered along with the remains included marine shell artifacts with Indian drawings on them. One example would be gorgets, which would have been suspended around the neck, much like a necklace or a pendant. The design on the specific ones Peres handled from this particular site is the Citco rattlesnake gorget style, which is specific to East Tennessee and the Chattanooga area. It’s a highly stylized rattlesnake motif that was central to the ideology and iconography of the Native Americans who lived in the area at the time.

Peres, with the help of student assistant Tiffany Saul, who has a B.S. in anthropology and is finishing an M.S. in biology—both from MTSU—and will start a Ph.D. in anthropology at UT–Knoxville in August, used high-tech equipment from MTSU’s labs to attempt to determine from where the artifacts may have originated, which would explain a lot about trade networks with people who lived in Chattanooga and also along the Gulf Coast during the late prehistoric period. A portable x-ray fluorescence analyzer was used to glean information about the composition of each artifact. It is a nondestructive analysis, meaning Peres and Saul didn’t have to grind up the samples or destroy the artifacts in any way. That’s important since the artifacts are Native American and planned for reburial. Over time, the two built a database allowing comparisons of different artifacts from different places to identify similarities or major differences that could point to their geographic origins.

“It doesn’t tell us where these artifacts came from but gives us trace elements that are part of their chemical composition, which helps us build a database of chemical signatures that we will then use to compare with marine shell from areas around the Gulf of Mexico,” Peres explains. “We have a small database that was constructed back in the ’90s of marine shells from around the Gulf of Mexico. Additionally, I work on sites in southwest Florida that were occupied around the same time as this site in Chattanooga. (That chiefdom was the Calusa, and they met the Spanish as well.) So I have artifacts from those sites that we can do the same analysis on and see where we have some, maybe, overlap in chemical composition that we can try to determine where these may have come from.” 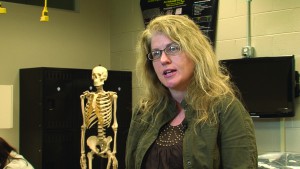 Though the presence of these marine artifacts suggests they were brought to the area by explorers and used in trade, that is by no means a certainty. “That’s the question,” Peres says. “Were they going to the Gulf of Mexico themselves? Was there some kind of spiritual journey where, for instance, a shaman or religious person went to extract these? Or were they trading with them?”

Peres’s hypothesis is that they were trading for them, as opposed to directly acquiring these resources, in part “because the Gulf of Mexico, the coastline, was not an open territory for just anybody to be able to go to.”

In addition to work like this in East Tennessee, Peres continues to conduct important analysis of archeological sites in Nashville, where the flood that submerged downtown Nashville in May 2010 also swept away thousands of years of human history: prehistoric burial sites along the banks of the Cumberland River. Along with students, Peres has surveyed numerous sites and documented samples from the most endangered. The work has curtailed raids by looters who covet the sites for their black-market potential.