UPDATE: Hodge is speaker at ar..

Graduate in Four and Get More

Five Minutes with the President, Dr. Sidney A. McPhee 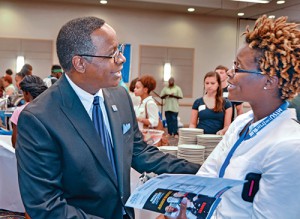 In September 2014, during a six-city tour to convince the best and brightest students across Tennessee to attend MTSU, you unveiled a new initiative—the MTSU Student Success Advantage. You’ve described the plan as a game changer for students who want to do more than just go to college. You’re talking about students who expect to get the support they need to actually succeed and graduate. Give us the short version of what this new plan is and what it does.

The first two years are critical to a university student. A bump in the road, especially at the beginning, can derail the progress of those struggling to stay enrolled.

The MTSU Student Success Advantage plan, which has the tagline “Graduate in Four and Get More,” will supplement by $1,000 the HOPE Lottery Scholarships of incoming students who seek a four-year degree and stay on track to graduate on time. Our University will provide a $500 supplemental scholarship to students receiving the HOPE Scholarship after each of their first two years. Students must remain eligible for the HOPE Scholarship to get the award from MTSU.

Under the plan, we will provide what we call a Finish-Line Scholarship to graduating seniors that will return any tuition increases incurred during the four-year period of their studies.

We expanded the eligibility to qualify for five major scholarships guaranteed to eligible students. We changed our Transfer Academic Scholarships from being competitively based to guaranteed for students from all Tennessee community colleges. And, even in a time of reduced state budgets for higher education, we made a major investment in student success by reallocating money to hire 47 more academic advisors, who will help students maximize their investment and these incentives by providing the support, guidance, and encouragement to stay on track to graduate on time.

What is the overall goal of these new initiatives?

Our goal at MTSU is to make higher education more affordable for incoming freshmen who meet our competitive admission standards and choose to start college at MTSU.

We also developed this program to complement and reinforce Gov. Bill Haslam’s Drive to 55, which seeks to increase the percentage of Tennesseans with postsecondary degrees or certificates to 55 percent.

We know firsthand that $200 to $300 can make a difference in terms of whether a student comes to or stays at MTSU. All these incentives, plus our increased emphasis on advising and other reforms, represent our desire to address obstacles through the University’s resources.

We do hope that future tuition increases are minimal, but if that occurs, the net effect of our Finish Line Scholarship will hold students harmless from any increases—provided they stay on track to graduate in four years.

We believe the MTSU Student Success Advantage is unique among our state’s public universities.

And, at its core, the Student Success Advantage has a strong message: If you maintain a steady pace to graduation in four years, we will do all we can to help you achieve your goal.

For more information about the Student Success Initiative, visit www.mtsu.edu/student-success-advantage.

It All Adds Up

A New York Federal Reserve study released in summer 2014 and analyzed in an article by the Wall Street Journal found that four-year degrees remain solid investments.

Separately, the Indiana Commission for Higher Education issued its first “return on investment” report in 2013 and found that Americans with four-year degrees made 98 percent more an hour on average in 2013 than those without a degree, up from 89 percent five years earlier, 85 percent a decade earlier, and 64 percent in the early 1980s.

The report also found that the average salary for a graduate with a four-year degree started to surpass that of an associate degree holder five years after graduation, with the gap growing to nearly $7,000 annually after 10 years.

A May 2014 New York Times article, citing an Economic Policy Institute report that used Department of Labor statistics to reach its findings, recently found that the wage premium for people who have attended college without earning a bachelor’s degree—a group that includes community college graduates—has not been rising.

“The big economic returns go to people with four-year degrees,” the article said. “Those returns underscore the importance of efforts to reduce the college dropout rate.”

“College is worth it, and it’s not even close,” the article continued. “For all the struggles that many young college graduates face, a four-year degree has probably never been more valuable.”