Soon after David Schmidt joined MTSU in 2011 as vice provost for international affairs, he started researching places around the globe where MTSU had a high concentration of graduates. His thinking? MTSU should organize events for international alumni worldwide to try to make the University part of their lives again.

Schmidt had heard that MTSU had a significant alumni base in Thailand: graduates who attended MTSU in the ’70s, ’80s, and ’90s through a government-led funding program. He had also heard that members of this large Thai alumni population had in recent years made overtures about reaffiliating and reassociating with the University if only MTSU could help create a stronger presence and support system in their country.

By meeting with MTSU Alumni Relations director Ginger Freeman, Schmidt was able to identify more than 400 MTSU graduates living in Thailand. Among them were scientists and successful business people and even the country’s deputy prime minister.

With the help of Kiyoshi Kawahito, a former economics professor at MTSU, Schmidt sent out emails and postcards announcing an event in March 2012 in Thailand where MTSU grads there could reconnect with each other and with the University.

A Night to Remember 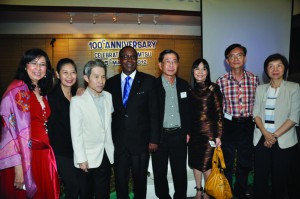 Schmidt found a willing ally in President Sidney A. McPhee.

“The president bought into it and agreed to attend, and that was key,” Schmidt says. “To say to these people, ‘Your president is coming to visit you in Thailand,’ is huge. And he was fantastic. He worked the room.

I think—no, I know—he shook the hand of everyone there and gave them an MTSU pin. It was a great event.”

One highlight was the presence of two professors emeritus who had taught the vast majority of attendees during their years at MTSU.

“We asked for a show of hands, and probably 80 percent affirmed that these two professors had taught them,” Schmidt says.

Another highlight was McPhee’s request that attendees find a way to travel to the States and attend Homecoming later this year.

“I hope they take us up on the offer,” McPhee says. “I hope a group will come back and see how much Murfreesboro and MTSU have changed since they were here decades ago.”

“It’s something many universities haven’t done, though they are starting to because international alumni tend to be very successful people,” Schmidt says. “There will be donors to come out of this Thailand trip. Strategically, this was a smart move on the University’s behalf.”

Schmidt adds that now, when it comes time for the sons and daughters and grandkids and neighbors of these alumni to decide where to study in the U.S., they will be more likely to choose MTSU. That’s good news for the University. Each year, NAFSA, the world’s largest nonprofit professional association dedicated to international education, issues a report on the economic benefits of spending by international students and their dependents. During the 2010–2011 academic year, those groups contributed more than $120 million in tuition and fees alone to the Tennessee economy. The total net economic impact topped $150 million. Clearly, enrolling international students makes the University’s investment of time and energy on a trip like the one in March more than worthwhile.

“We think this trip will pay us back many times over,” Schmidt says.

The potential impact of philanthropy coming from Thailand also makes the trip a great investment. McPhee emphasizes that overseas alums “have a tendency to demonstrate a stronger affiliation to their U.S. alma mater than do domestic graduates.”

According to McPhee, engaged international alumni have proven to be invaluable resources when MTSU seeks partnerships, research collaborations, and philanthropy. He noted that the Thailand trip also yielded discussions about future ties between MTSU and Bangkok University. “With the balance of wealth shifting overseas, it will be critical for forward-thinking universities to examine their international outreach efforts and develop new strategies to cultivate new relationships and strengthen existing support,” he said.

McPhee stressed that for international alumni outreach to work in Thailand and elsewhere, it cannot be merely a token effort. MTSU officials, the president said, “will have to demonstrate sincerity. We will have to go back.” McPhee said he plans to do just that.

Also key to maintaining momentum in Thailand will be the efforts of certain Thai ambassadors—graduates who really stepped up and helped spread news about the March event—to maintain contact with both Thai graduates and the University.

“We brought them together and helped create a club or chapter, the MTSU Alumni Association of Thailand,” Schmidt says. “But running these folks down is labor-intensive. It’s a lot of digging and archival work. From this point on, we hope they begin to employ listservs, Facebook pages, or other methods so that we can continue to send them news and notifications about what’s happening at MTSU.”

With the Thailand trip a success, Schmidt is already looking for the next place for outreach. There are many other spots around the globe ripe for a similar effort. According to Schmidt, there are high concentrations of MTSU graduates in Saudi Arabia (the likely next trip), China, and Japan. He hopes to settle on a continent soon and start making plans for next year’s event.

McPhee summed up the purpose of global alumni outreach by pointing out that if alumni around the world are reaching out to MTSU, “then we need to reach back. We need to figure out how they want us in their lives.” There’s certainly no better way to do that than to stand before them, look them in the eyes, and ask. MTSU