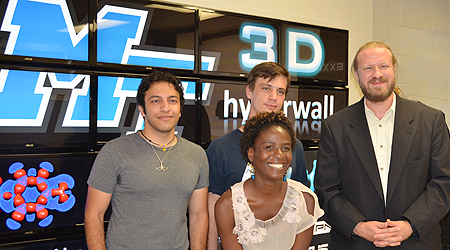 Technology similar to what people see in the “Avatar” movie series has reached the MTSU classroom—and “it brings science to life,” said Dr. Anatoliy Volkov, who has helped bring it to campus.

The new MT 3-D VizLab, short for the Stereoscopic 3-D Visualization Laboratory, is located inside Kirksey Old Main. The historic building, with its signature eight columns, is home to the computer science, mathematical science and geoscience departments.

During the recent unveiling of the VizLab facility, MTSU administrators learned— with the help of students—how technology designed for computer gaming can be used to perform high-level research in scientific disciplines.

“I am excited to see such technology become available to MTSU students,” biochemistry undergraduate student Julian Harbehband said. “With the creation of the 3-D VizLab and supercomputing center, MTSU has established itself at the forefront as a research-oriented university.”

The laboratory is equipped with the latest 3-D technology available from NVIDIA and includes a stereoscopic 3-D projector and a 16-display 3-D hyperwall, said Volkov, an associate chemistry professor and one of the guiding forces behind the research room.

A hyperwall is an array of liquid crystal display monitors, Volkov said, adding that 20 pairs of 3-D shutter glasses are part of the equipment used by students in their research.

NVIDIA is the company that invented the GPU, or graphics-processing unit, in 1999.

VizLab applications can be applicable in the areas of engineering, health care, chemistry, economics, physics, biology, geoscience and more.

Irwin, who helped set up the hyperwall used in the MT Steroscopic 3-D Visualization Lab, stands next to the computers that produce the video signals to drive the hyperwall's monitors.

With hyperwall technology, Volkov said that users can “visualize a single image across all 16 monitors” in the “power mode,” with each monitor displaying a piece of the image.

In the hyperwall mode, he continued, “each monitor has a programmable relationship to the others. A stereoscopic 3-D can be enabled in any of the modes.”

Volkov credited Dr. Preston MacDougall, an MTSU chemistry professor, with inspiring his MTSU colleagues to get a hyperwall. MacDougall was introduced to hyperwall technology in 1999 while working as part of a summer research fellowship at NASA Ames Research Center.

The presentations included demonstrations by MTSU faculty and students as well as one from Dr. Christian Weitholt, a representative of Visage Image Inc. Visage is a global provider of enterprise imaging and advanced visualization solutions for diagnostic imaging and clinical research.

Weitholt discussed a collaboration between MTSU and Visage Imaging that included establishing the University as a beta site for their flagship 3-D visualization tool called Amira.

Students used the opportunity to showcase their research to MTSU administrators and their peers. They included:

“The amazing part of this new area is its dynamic ability to appeal to the many different departments at MTSU: architecture, anthropology, aerospace, forensics, physics, biology and chemistry,” Harbehband said. “I could go on and on. The only limiting factor is our imaginations.

“With close collaboration with these departments, we not only can provide theoretical evidence to back research but can visualize the information by a new interactive method that allows a much clearer understanding by students and researchers alike.”

“Both work with state-of-the-art computational modeling tools in their chemistry research,” said MacDougall, who serves as a mentor to both scholars.

Students using the technology for their research will be wearing $300 3-D glasses.

“You can have 3-D technology without glasses, but you definitely need shutter glasses to see in 3-D,” Volkov said. “With both your eyes, shutter glasses give you a stereoscopic view.”

As for how the technology can be used with medical images, Volkov said MTSU alumnus and MTSU Foundation board member Dr. Walter Chitwood Jr., a Murfreesboro dentist, “saw the advantages and was very impressed and excited to see it. He performs sophisticated surgeries. He felt 3-D gives a better perspective than 2-D.”

The 3-D VizLab has been funded primarily by an external earmark grant from the Department of Energy awarded to chemistry faculty MacDougall, Volkov and Dr. Tibor Koritsanszky in 2010. Contributions also have come from the doctoral program in computational sciences and its director, Dr. John Wallin.

In addition to the doctoral program in computational sciences and MTSU Foundation, other partners include the U.S. Dept. of Energy’s Office of Science, the MTSU Office of Research and Dr. Mike Allen, vice provost for research and dean of the College of Graduate Studies, and the Office of the University Provost, Dr. Brad Bartel.