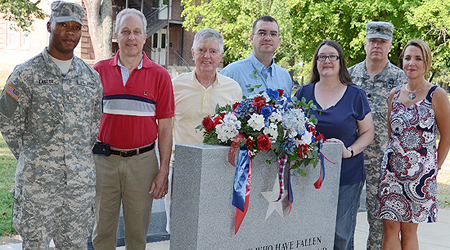 Outside the Tom H. Jackson Building on the MTSU campus, the Veterans Memorial offers a quiet place of reflection that is of particular interest around patriotic holidays.

The public is welcome to stop by on holidays or any other day to pause and reflect on the sacrifices men and women in the U.S. armed forces have made for their country.

In addition to a large, two-sided granite monument recognizing members of the MTSU community who have died in action, there are six smaller granite monuments, each with a flower basin, for the five military branches—Army, Navy, Air Force, Marines and Coast Guard—and one for those missing in action.

Another monument, with a floral arrangement on top, reads: “To Those Who Have Fallen Who Were Students First and Served Their Country With Honor.”

Bricks inscribed with the names loved ones and friends who have served their country are arrayed in rows between the wall and the Jackson Building.

To order brick pavers to honor a veteran, visit www.mtsu.edu/military/documents/brick.pdf. Placing your order by Sept. 1 will ensure it will be available for the annual MTSU Salute to Armed Forces/Veterans Day events Oct. 27.

MTSU has had a military science and ROTC program since 1950.