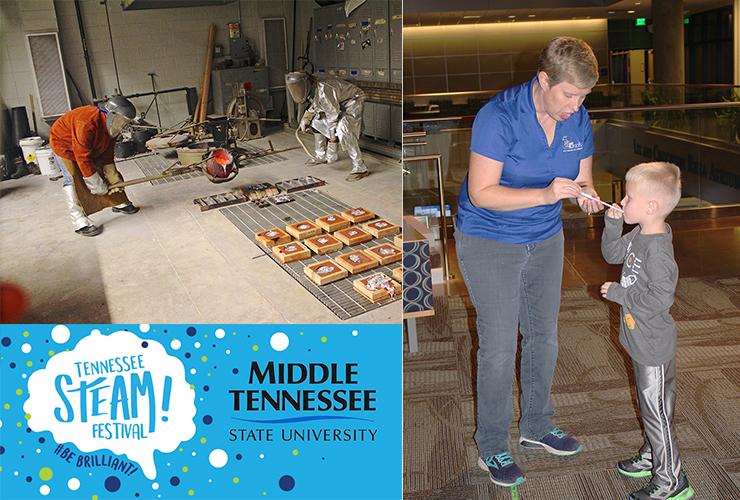 MTSU will once again have a prominent role with the annual Tennessee STEAM Festival.

The sixth Tennessee STEAM Festival brings science, technology, engineering, art and math to life at events across the state. It was founded by the Discovery Center at Murfree Spring in Murfreesboro, Tennessee.

“I’m thrilled to see our increased faculty and student involvement in the STEAM festival,” College of Basic and Applied Sciences Dean Greg Van Patten said. “Informal education is just one important way MTSU benefits our community and state. Additionally, any opportunity we have to keep STEM and the arts in front of young people potentially could inspire them to pursue degrees and careers in these specialized fields.”

A featured event will be the Tennessee STEM Education Center’s 4 to 5:30 p.m. Friday, Oct. 14, talk led by biology assistant professor Elizabeth Barnes, whose topic — “Teaching Culturally Controversial Science Topics in the 21stCentury Seminar” — will be a K-12 teacher professional development activity. It will be held in Room 1006 of the Science Building, 440 Friendship St.

“The American public is more polarized than ever about culturally controversial topics like climate change, evolution and vaccines,” Barnes said. “In this seminar, we will discuss how scientists and science teachers can play a role in mitigating this polarization through inclusive and culturally competent science teaching and communication.”

Other highlight activities include:

• “Rocks, Fossils, the Civil War and Revolution on the Murfreesboro Greenway” — 10 to 11 a.m., Saturday, Oct. 15, an outdoors event at Fortress Rosecrans Trailhead, 1916 Golf Lane, in Murfreesboro. It will be led by geosciences professor Mark Abolins (Mark.Abolins@mtsu.edu).

Abolins said the trailhead is the gateway to limestone rock formations and fossils millions of years old, Civil War fortifications and a creek named after a Revolutionary War captain. He recommends wearing sturdy shoes or boots.

• “Trees are Terrific! A Self-Guided Tour of MTSU’s Arboretum” at MTSU. It is an outside tree tour that can be done anytime during daylight hours. Professor Kim Cleary Sadler (Kim.Sadler@mtsu.edu) said it is a casual walk that takes about two hours.

All visitors are requested to use parking meters or obtain a permit from the Parking and Transportation Services office at 205 City View Drive or print a visitor pass at https://mtsu.t2hosted.com; visitor permits are $2 per day.

Sadler said trees are the largest organisms most of us will encounter in our lifetime, recommending people visit in early fall to view representative native Tennessee trees with one exception, the Ginkgo.

MTSU personnel will man six booths at STEAM-a-Palooza, from noon to 4 p.m.(and free admission) Saturday, Oct. 15, at the Discovery Center, 502 Southeast Broad St. They include:

• Do It Yourself Kaleidoscope, led by Ragland.

• “How to Count and Check Microorganisms on Your Hand: Microbal Handprint,” led by MTSU Fermentation Science faculty and students to help promote hygiene. (Seockmo.Ku@mtsu.edu)

• Paint by Chemistry, led by professor Preston MacDougall, who said to “come and be a molecular Monet.”

At Murfreesboro Municipal Airport from 9 a.m. to 1 p.m. Saturday, Oct. 22, MTSU Aerospace will have jet and piston engines on display for the public to view all the inner workings of the engine, plus show off the aircraft that train future airline pilots. It is part of the airport’s participation in the STEAM festival.