MTSU’s Baum sworn in to Genera..

Weather permitting, the MTSU Department of Physics and Astronomy and the MTSU Astronomy Club will welcome the public this Sunday, Jan. 20, to watch the total lunar eclipse at the university’s observatory on campus.

Visitors are welcome from 9 to 11:45 p.m. Sunday if the weather is clear, said Dr. Chuck Higgins, associate professor of astronomy at MTSU. He added that no formal talk or program is planned, only observation of the lunar event.

Current forecasts call for temperatures in the low 20s Sunday night with some gusty winds and clouds.

A partial eclipse will begin at 9:33 p.m. Central. The total eclipse begins at 10:41 p.m. and ends at 11:43. A second partial eclipse ends at 12:50 a.m. NASA is estimating the duration of the Jan. 20 eclipse at one hour and two minutes and says totality will be visible from North and South America, Europe and western Africa.

NASA is calling the Jan. 20 eclipse a “super blood moon” because of of the full moon’s proximity to Earth and the resulting reddish hue from the eclipse.

According to the Department of Physics and Astronomy, this particular eclipse is also sometimes referred to as a “super blood wolf moon.” Native American tribes in what’s now the northern and eastern United States called the January full moon phase the “wolf moon” because the hungry animals howled during the winter full moon, which coincides with the start of their breeding season.

The NASA website explains that a lunar eclipse occurs when Earth “gets in the way of the sun’s light hitting the moon. That means that during the night, a full moon fades away as Earth’s shadow covers it up.”

The site continues: “The moon can also look reddish because Earth’s atmosphere absorbs the other colors while it bends some sunlight toward the moon. Sunlight bending through the atmosphere and absorbing other colors is also why sunsets are orange and red.

“During a total lunar eclipse, the moon is shining from all the sunrises and sunsets occurring on Earth.”

The stages of the Sept. 27, 2015, “super moon” lunar eclipse are captured by a NASA photographer as the moon moved the agency’s Glenn Research Center in Cleveland, Ohio. Another total lunar eclipse is expected Sunday, Jan. 20. (Photo illustration by Rami Daud/NASA)

The MTSU observatory is located on Old Main Circle, next to Wiser-Patten Science Hall and near the Cope Administration Building. A campus map is available at http://tinyurl.com/MTParkingMap.

MTSU’s Department of Physics and Astronomy conducts regular “Star Parties” for the public on the first Fridays of months during the spring and fall semesters and for special astronomical events like eclipses.

The first “Star Party” for spring 2019 is set for Friday, Feb. 1, with more details to be announced. 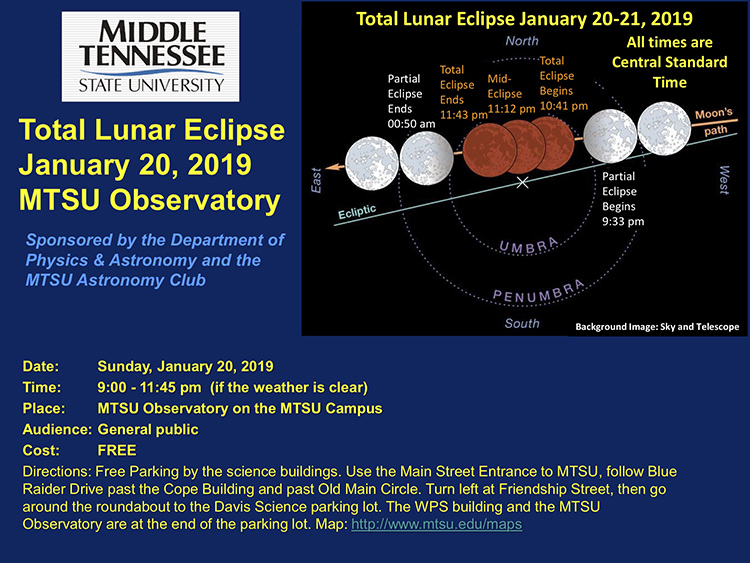