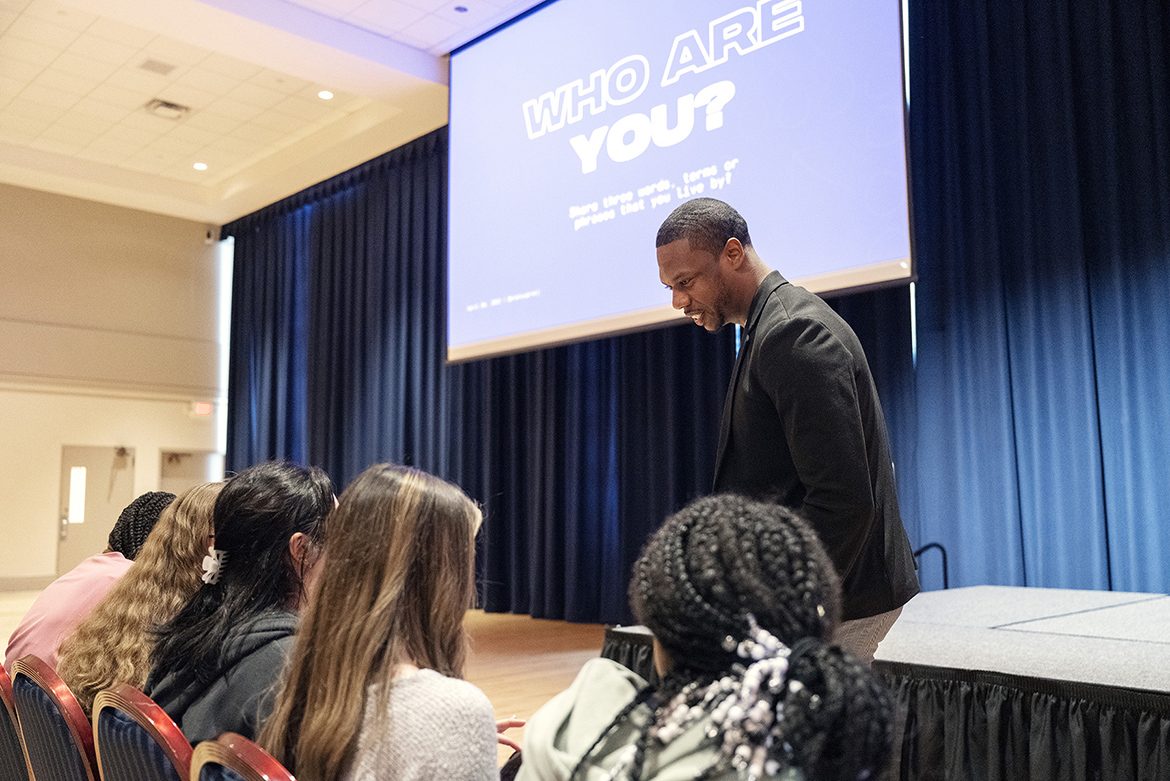 By the time he was senior, former college quarterback Troy Jones knew he wasn’t going to the NFL, leading to “a true identity crisis.” He decided to build on his sports management degree to start pursuing his MBA online — but never gave up on his calling to the sports industry.

Now the 30-year-old entrepreneur is co-founder and chief executive officer of the sports technology gaming company StatusPRO, collaborating with the likes of Lebron James, Drake and Naomi Osaka on virtual reality gaming that is making waves in the very league to which he once aspired.

During an interactive keynote address for MTSU’s Financial Literacy Week on April 6 at the James Union Building, Jones shared his winding journey from non-scholarship athlete at the University of Maryland to a pitstop playing junior college before finishing up his collegiate career at Western Kentucky. 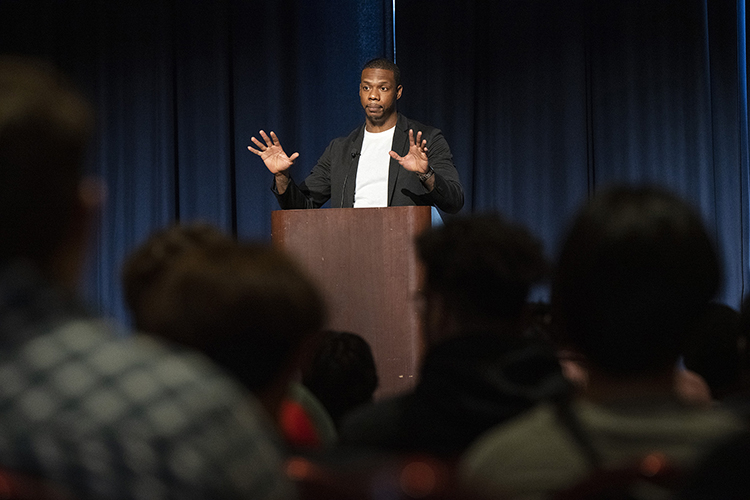 The Baltimore, Maryland, native, began his talk by identifying three core principles that he’s lived by to help him navigate his personal and professional journey: being self-aware, investment and resilience.

“I had to ask myself, ‘OK, Troy, what do you like? What are your strengths? What are your weaknesses? What makes you happy?’ In doing that, you’re holding yourself accountable,” he told the crowd of 100-plus students in attendance. “… Find your passion, identify a problem and solve it.”

That search for his passion led Jones to leave the somewhat secure full-time job with Morgan Stanley — “it wasn’t fulfilling; I didn’t feel like this was my purpose” — to take an internship with the National Football League Players Association where he was able to network with influential people and learn the various aspects of the business. 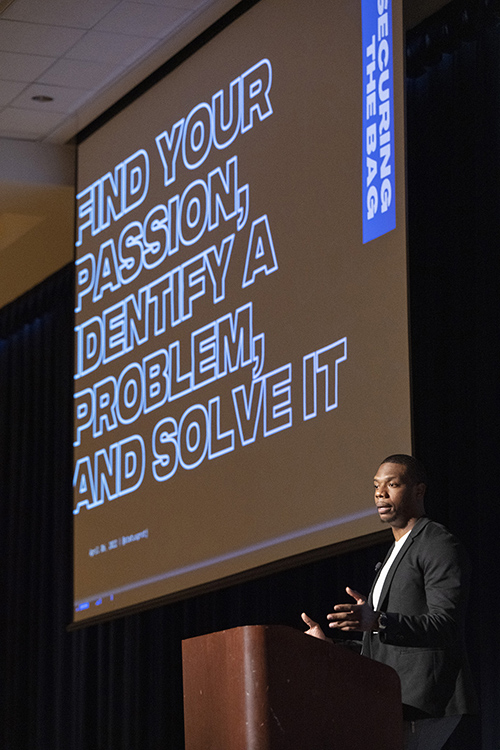 Early into his address, Jones asked students to pair up with someone they didn’t know and ask each other to share three principles or words that they live by; then he randomly called upon a handful of students to share what they learned before tossing free T-shirts to those who volunteered.

One of those students, 29-year-old Amanda Rogers, a senior information systems major from Hermitage, Tennessee, said Jones’ story was very inspirational for a nontraditional student like herself returning to school to improve their career prospects.

“He has made so many huge transitions, and he seems fearless and has resilience,” she said. “So I’m definitely going to take away having a little bit less fear, don’t be afraid of someone telling you no because a lot of people will … and you just have to learn from it.”

Scheduled to graduate in December, Rogers isn’t quite sure of her post-graduation plans, but after hearing Jones she plans to “open myself up to more opportunities, and I think I’m going to apply to a lot more jobs that I maybe wouldn’t have. … There might be that one person that says yes.”

Finance professor and event co-organizer Anne Anderson, the Weatherford Chair of Finance, was pleased that so many students were able to hear about Jones’ journey firsthand. Jones also spoke to a group of Blackman High School students before his address to MTSU students.

“The value of having external speakers for our students is immeasurable. Troy Jones shared his journey, including his trials, and by doing so he let all the students know the importance of setting goals and having purpose,” Anderson said.

“I was especially grateful that he shared some of the challenges he faced and helped all to know that having to pivot does not mean you failed, it just means you need to reassess and set new goals. I am pleased that so many students showed up to benefit from his wisdom and life experience.”

During an extensive Q and A session with students following his talk, Jones offered a litany of advice such as being able to overcome rejection from investors; understanding that “founding a company is hard”; developing a strong team of people around you; understanding that a certain amount of fear isn’t unusual. 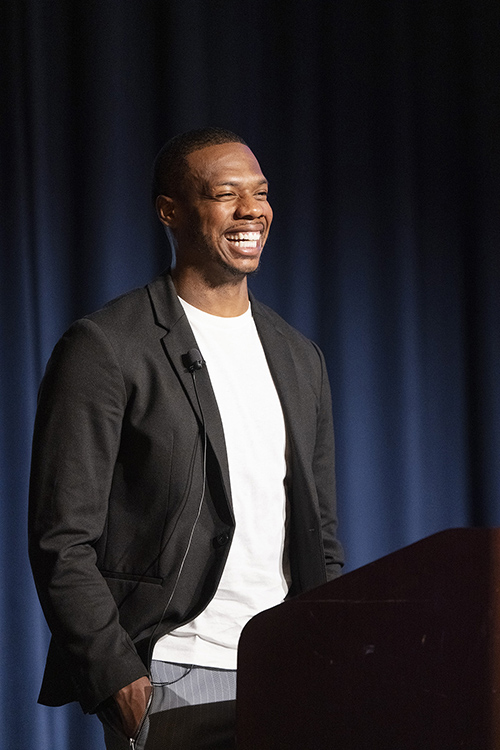 Troy Jones, CEO of StatusPRO, is all smiles as he speaks to Blackman High School students Wednesday, April 6, in the Tennessee Room of the James Union Building. (MTSU photo by Andy Heidt)

That NFLPA experience, part of which involved helping players transition away from the field, increased his desire to expand his horizons beyond that limited role within the industry because “I knew there was something more that was inside me,” he said.

He was introduced to VR technology during this period and believed it could be used to address increasing health and safety concerns surrounding the high impact sport. He helped develop a VR simulation product that teams could use for practice to reduce the amount of physical contact and connected with former NFL player Andre Hawkins, StatusPRO co-founder and chief business officer.

They eventually pivoted into VR gaming to develop a unique virtual experience for NFL fans. That drew the investment interest of famous figures like the NBA’s James and companies such as Meta, Verizon and Sony. He said once launched, the VR product will be the first NFL game outside of the widely popular “Madden NFL” video game and marks the initial entry into the sports “metaverse.”

For Jones, calling this latest professional audible to venture into VR gaming came a bit more naturally than expected after a lifetime of experience from playing a game he began at 6 years old and that taught him lessons beyond the field that he continues to discover.

“I talked about how I was a quarterback, and my goal was to be an NFL quarterback,” he said. “Little did I know, that whole process — everything I went through as a kid to high school through my process in college — prepped me for being a CEO, prepped me for building the relationships that I have in this space, and ultimately is something that is much bigger than I thought I would do in sports.” 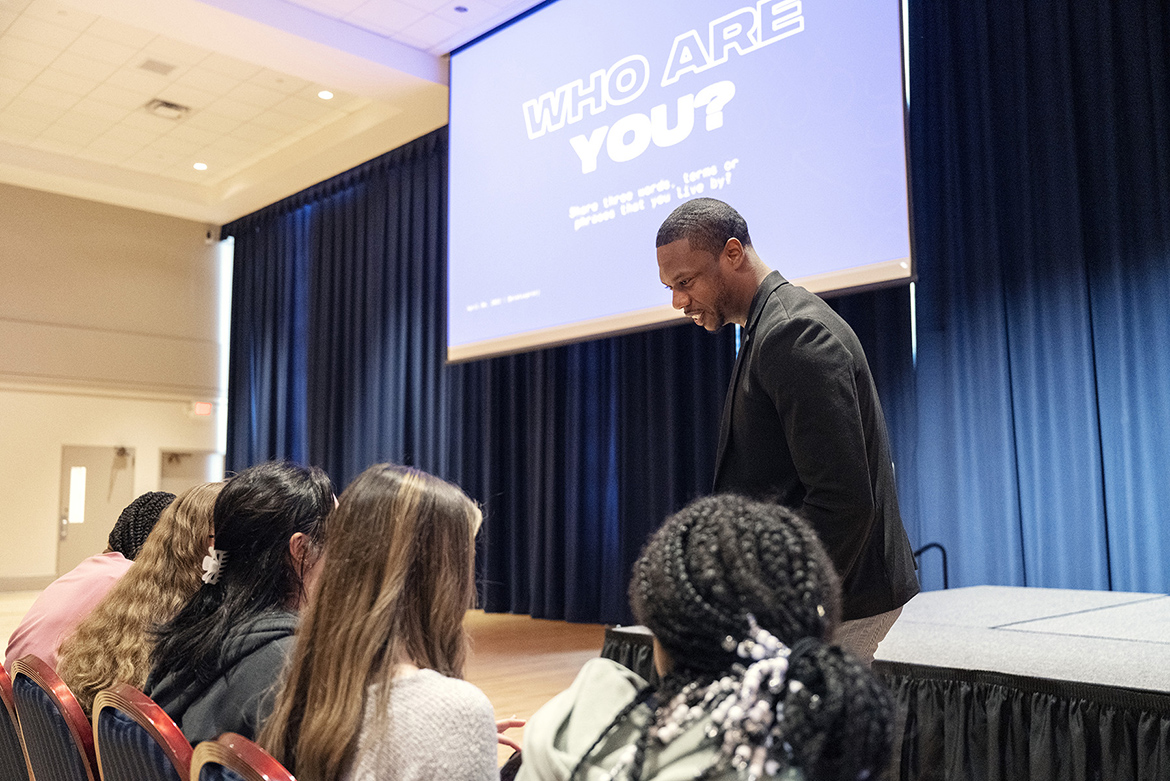