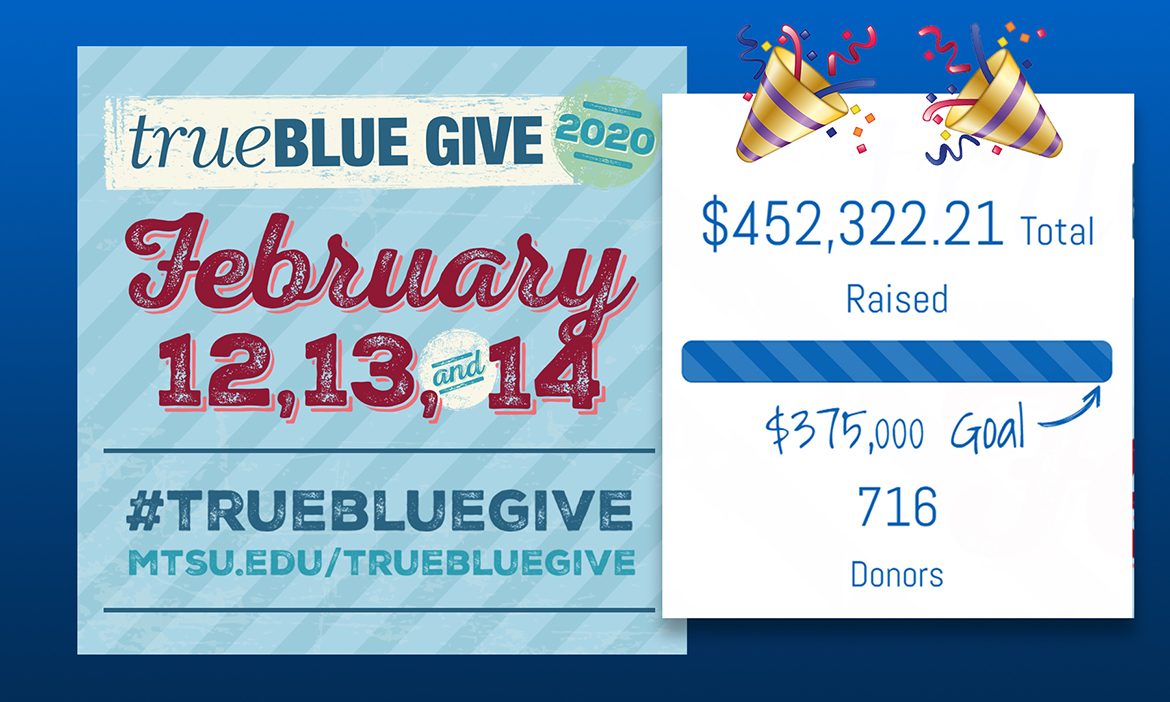 The Middle Tennessee State University community showed what it really means to be “true blue,” smashing this year’s fundraising goal through the annual “True Blue Give” 72-hour donor drive.

Almost 700 MTSU alumni, friends, faculty and staff and even some current students donated more than $450,000 toward scholarships, student emergency funds, academics and athletics during the Feb. 12-14 online campaign. The initial goal was $375,000.

“In the True Blue Give’s third outstanding year, more donors helped more students than ever before. Thank you to our 700 donors for making academic success ever more achievable at MTSU.”

One of those donors is alumnus Jonathan Harmon (Classes of ’03 and ’05), a member of the MTSU National Alumni Association who has a bachelor’s and master’s in business.

“I believe in giving to your university as it has given to you,” Harmon said. “In my case, I continue to receive value for my education, the connections made while at MTSU and the continued camaraderie between alumni and supporters. Because of this, I continue to give. If MTSU’s status rises, my degree’s value does too and I can be a part of that mission. I am True Blue!”

In the days and weeks leading up to the campaign, numerous alumni were featured in video testimonials emphasizing the importance and impact of giving back. Donors could designate funds go to specific areas and programs throughout campus or give to the general campaign.

In a thank you video (watch below), MTSU senior multimedia journalism major Cherilynn Mella noted that 75 percent of MTSU students “receive some sort of financial aid while working an going to school, including students like me.”