BIRMINGHAM and HUNTSVILLE, Ala. — Tanner Collier and Peyton Jones find themselves in the same situation: They qualify for a new $8,000 Middle Tennessee State University True Blue Scholarship with their ACTs and GPAs, but they want to increase the guaranteed scholarship award by retaking the ACT.

Collier, 18, of Montgomery, Alabama, and Jones, 17, of Fayetteville, Tennessee, attended the annual True Blue Tour events to recruit prospective students — Thursday, Sept. 26, at the Birmingham Marriott and Wednesday, Sept. 25, at the Westin Huntsville. Both will be OK with a True Blue Scholarship, but are primed for reaching or surpassing a 25 on the ACT and earning an $18,000 Presidential Scholarship. 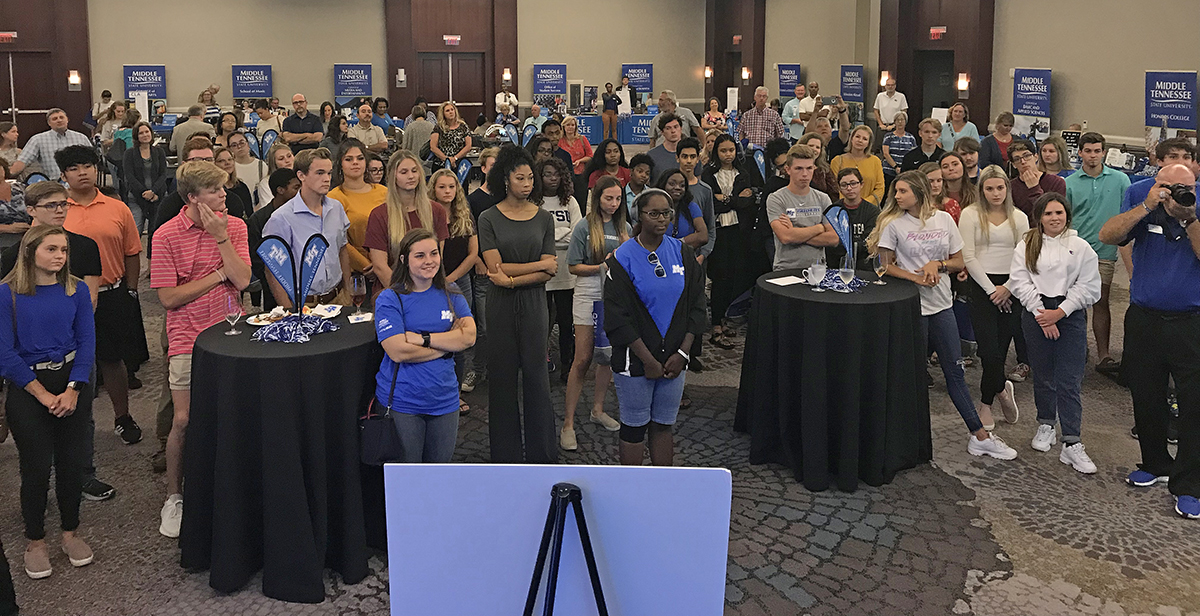 The crowd attending the MTSU True Blue Tour event in Huntsville, Ala., Wednesday, Sept. 25, listens as university President Sidney A. McPhee shares news about a new guaranteed $8,000 scholarship for students with a 23 or 24 ACT and 3.5 or higher GPA. (MTSU photo by Randy Weiler)

True Blue Tour events are where MTSU travels to 14 cities in four states, taking the university on the road to meet prospective high school and transfer students. To learn more, visit www.mtsu.edu/rsvp.

At Huntsville, Jones, a Lincoln County High School senior whose mother, Kristie (Price) Jones, graduated from MTSU in 1998 with an accounting degree, plans to take the ACT twice in October.

“I think it’s a good thing,” Peyton Jones said of the True Blue Scholarship for students with a 23 or 24 ACT and a 3.5 or higher GPA. “Especially for me. MTSU feels like home and the money helps. It definitely made me consider going there more and I’m definitely going to apply.” She plans to study marketing in the Jones College of Business.

A Churchill Academy senior, Collier has a 23 ACT and 3.5 GPA and wants major in audio production if he chooses MTSU.

“I talked to the president (Sidney A. McPhee),” said Collier, who attended the Birmingham tour event with his parents, Shelain and Twymine Collier. “He said a lot of students go to the Grammys, the CMAs and to Bonnaroo.” Tanner Collier added he could earn in-state tuition by majoring in songwriting and minoring in audio production.

At both Alabama cities, McPhee shared about the Regional Scholars Program and Academic Common Market opportunities.

• Caleb Hill, 17, of Helena, a senior at Jefferson County International Baccalaureate, expressed a heightened interest in MTSU’s computer science, computer engineering and Honors College programs, and already has a positive visit experience. He is a Presidential Scholarship candidate with a 3.5 GPA and 28 ACT, with plans to retake and aim for a 30.

“I have talked to some professors,” said Hill, who attended with his mother, Christie Hill. “It is very updated. I like the feel (of campus), it is close to Nashville and a good social life.”

• Joseph Green, 26, a Wallace State Community College student, saw his name drawn by Provost Mark Byrnes for a $2,500 scholarship, contingent upon him transferring to MTSU. Green wants to major in aerospace professional pilot — a program that also interests Keegan Wilson, 16, of Kimberly, Alabama, a junior at Mortimer Jordan High School. 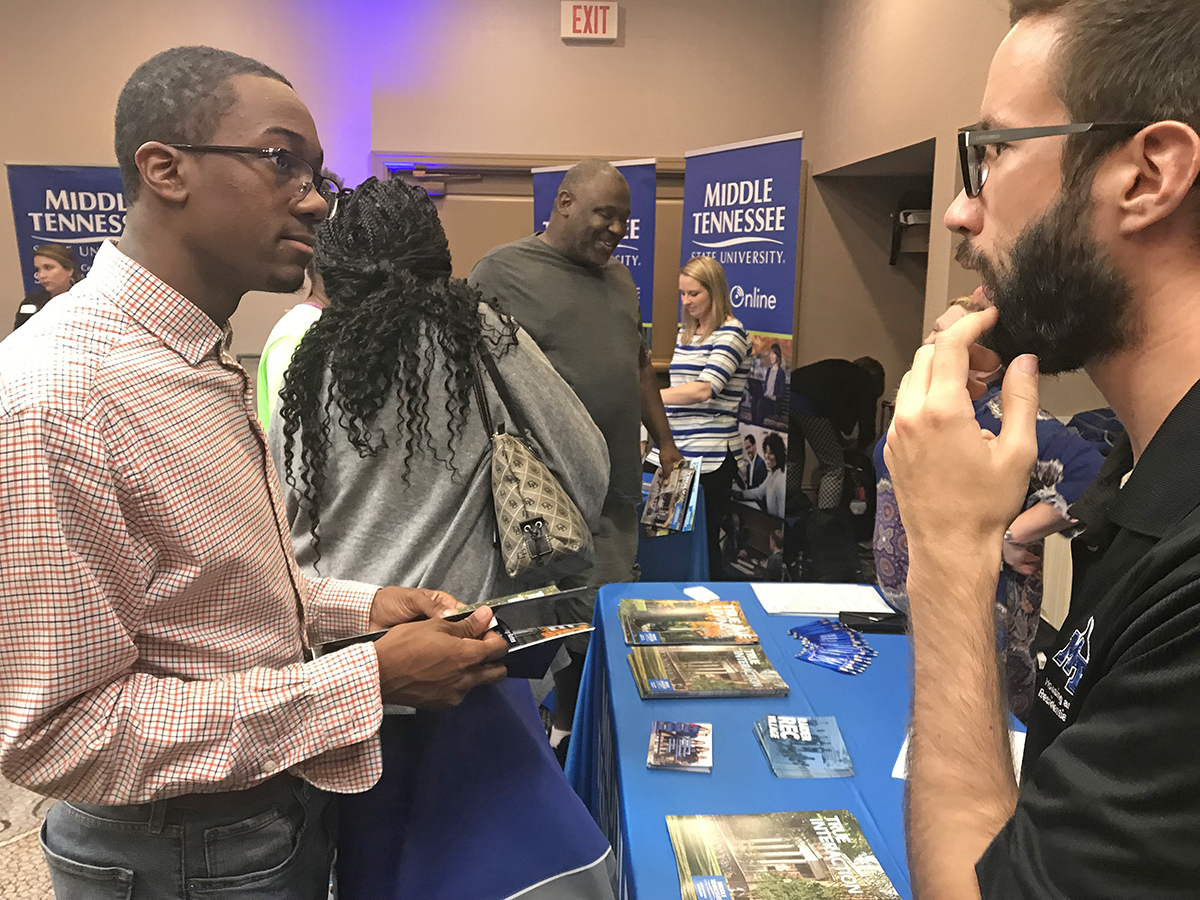 Caleb Hill, left, a senior at Jefferson County International Baccalaureate in Birmingham, Ala., learns more about MTSU Housing and Residential Life from Dylan Ruffra Thursday, Sept. 26, during the True Blue Tour visit at the Marriott in Birmingham. (MTSU photo by Randy Weiler)

Southern Middle Tennessee students and their parents turned out on Day 1 of the MTSU Alabama visit. 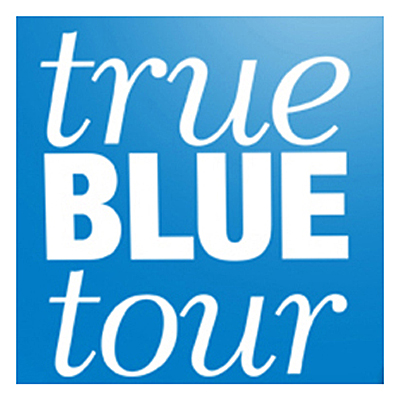 • Paul McRae, 16, a junior at Franklin County High School in Winchester, and his mother, Dawn Beinert, told McPhee about his keen interest in bowling in addition to sound design and film and television. MTSU has a club bowling, but no NCAA team. The president told them to reach out to MTSU athletics director Chris Massaro.

• LaNae Turner drove from their home in Eagleville, Tennessee, to join son Mitchell Turner, 20, a sophomore engineering student at the University of Alabama-Huntsville. He is considering transferring to MTSU to study video and film production.

• Jenna Hazelrig, 17, of Madison City, Alabama, a junior at Madison Academy, has a huge interest in MTSU’s forensic science program. “There are not a lot of places that have forensic science, and this (MTSU) is one of the best ones,” said Hazelrig, who attended with parents Chris and Lori Hazelrig.

MTSU travels to Johnson City, Tennessee, Tuesday, Oct. 1, for a 6 p.m. student reception at the Carnegie Hotel, 1216 W. State of Franklin Road; and to Knoxville, Tennessee, Wednesday, Oct. 2, for a 12:30 p.m. luncheon for counselors and community college staff and 6 p.m. student reception at The Foundry on the Fair Site, 747 World’s Fair Park Drive. Register at www.mtsu.edu/rsvp, though walkups are welcome. 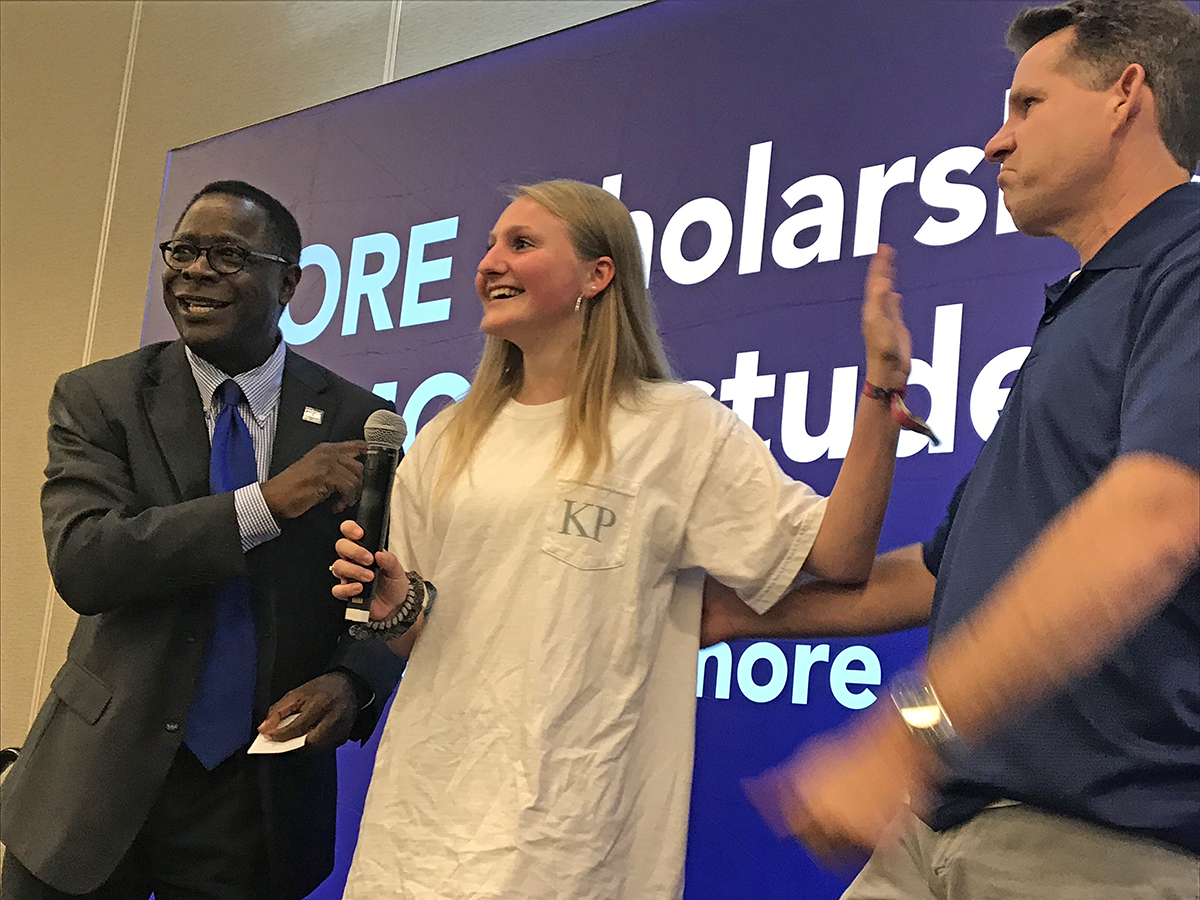 Nedelyn Crook, center, of Huntsville, Ala., a senior at Grissom High School, shares about her interest in athletic training as MTSU President Sidney A. McPhee, left, and her father, Jon Crook, an MTSU alumnus (Class of 1992), listen Wednesday, Sept. 25, at the True Blue Tour event at The Westin Huntsville. MTSU prospective student Nedelyn Crook qualifies for a guaranteed Presidential Scholarship with a 4.25 GPA and 26 ACT. (MTSU photo by Randy Weiler) 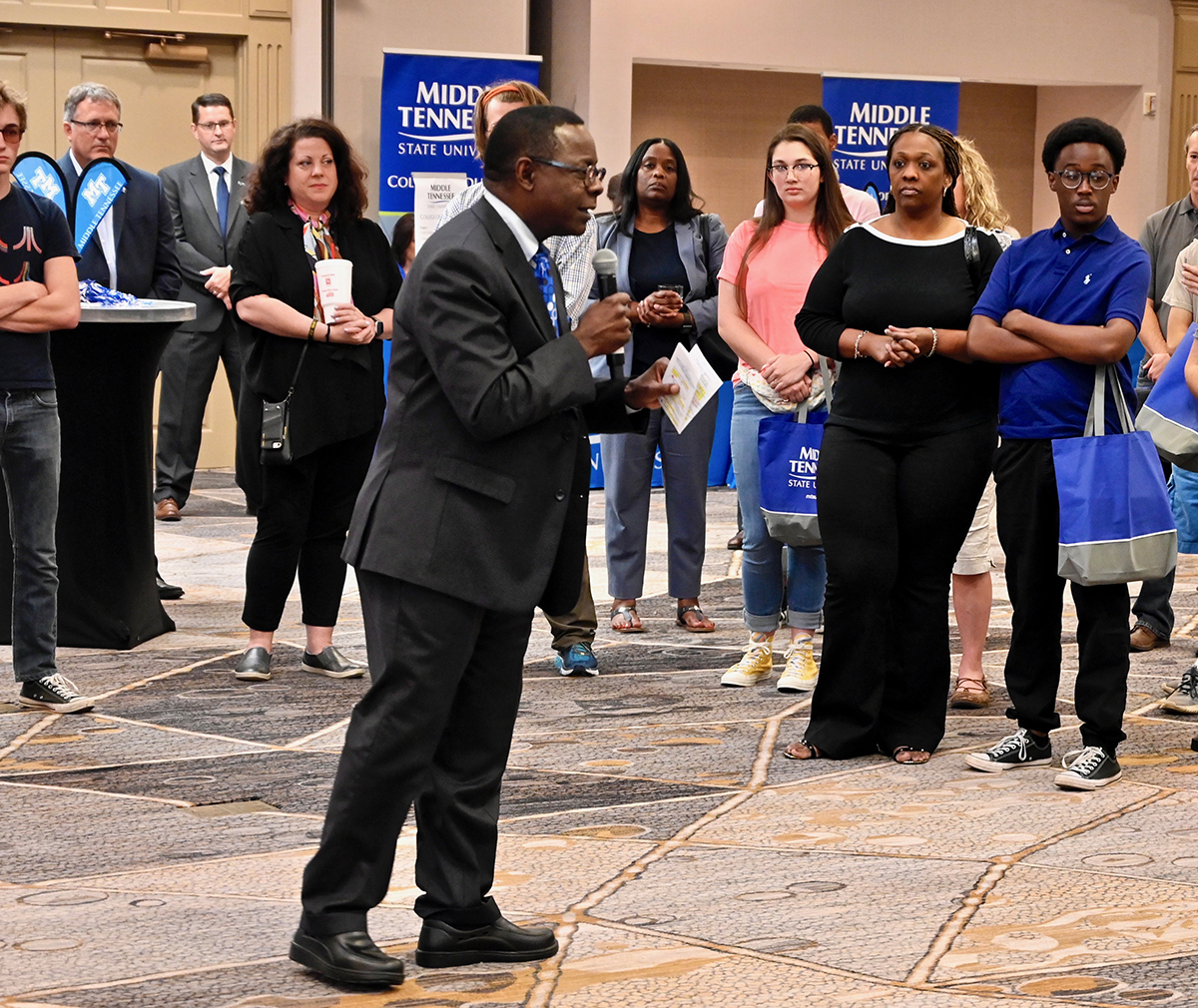 MTSU President Sidney A. McPhee shares with the crowd attending the Birmingham, Ala., MTSU True Blue Tour event Thursday, Sept. 26, at the Marriott the benefits of coming to the Murfreesboro university and guaranteed scholarships. (MTSU photo by Andrew Oppmann)