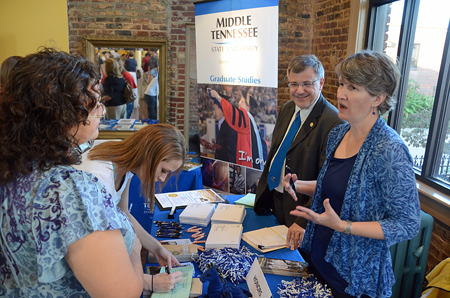 JACKSON, Tenn. — MTSU has wrapped up its statewide True Blue Tour with President Sidney A. McPhee joining top college administrators and admissions staff to host prospective students, their families and area guidance counselors in a bid to attract the state’s top scholars to the Blue Raider family.

The six-city tour’s final stop was held Oct. 25 at the Aeneas Building in downtown Jackson, Tenn., with a packed house on hand for the True Blue Tour reception held that evening. The tour also saw a strong turnout for an earlier luncheon for area high school guidance counselors as well as officials from Jackson State Community College.

Sherry Page, a guidance counselor at Greenfield High School in Weakley County, was pleased with the midday luncheon. She even won a $500 scholarship to award to one of her students.

“I have several graduates at Greenfield that have gone to MTSU, and I’ve never heard a bad thing about the university. Everybody’s always very complimentary,” she said. “Even Murfreesboro itself has grown. It’s a wonderful opportunity for us to learn about all the different areas (at MTSU).”

McPhee thanked the counselors in attendance in Jackson for helping MTSU become the No. 1 choice for Tennessee undergrads as well as the top choice for transfer students switching from two- or four-year institutions.

Just before the luncheon, McPhee joined Jackson State Community College President Bruce Blanding to sign a dual enrollment agreement that makes it easier for students to transfer credits between the institutions.

“We want to continue to build on the excellence of this institution, and the only way we can do that is to hear from you,” McPhee told the counselors and JSCC officials. “We want to hear from you as to how we can build and improve upon what we do in offering an exceptional quality education.”

“If you have not been to our campus in the past year, you have missed a lot,” Dr. Deb Sells, vice president of Student Affairs, told the crowd before showing a video of campus amenities and student testimonials about MTSU.

Hannah Fesmire, a senior at Liberty Tech High School in Jackson, wants to major in nursing and  said she “mostly likely” will attend MTSU. She stopped by the tour event, which impressed her mother, Stephanie, and father, Greg, as well.

“We learned about financial aid and different scholarships that MTSU offers,” Stephanie Fesmire said. “Everyone was very nice and helpful.”

The family plans to visit the campus in November for the first time.

Khaylah Day, a senior at North Side High School in Jackson, said she had narrowed her college choices to Fisk University in Nashville and MTSU, but after attending the Jackson event and seeing the university president and college deans interacting with prospective students, MTSU is now her choice.

“It was a very informative meeting and I had a lot of fun,” said Holt, who plans to major in journalism or photography.

“I thought the presentation was awesome and the staff was great,” she said. “I’m glad she’s going to MTSU.”

McPhee topped off the stop by awarding several scholarships, iPads and goodie bags to students and parents.