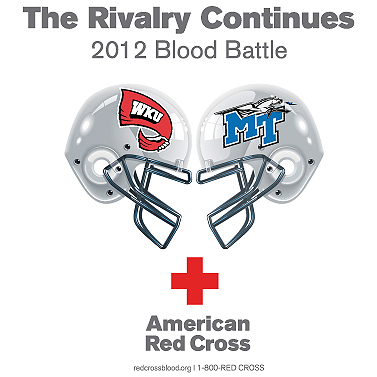 More than 3,700 people will have another year of living, laughing and maybe even cheering at an MTSU-Western Kentucky game, thanks to a “blood battle” that collected the lifesaving gift from more than 1,200 supporters at both universities.

WKU won the three-day competition, now in its third year, for the first time with a total of 637 successful donors.

The 2012 competition goal was 1,200 units of blood, and MTSU and WKU beat that goal by 55 units. Since each donation can help up to three people, the 1,255 units of blood can potentially save the lives of 3,755 people.

“This was the first year either school has brought in more than 600 productive units of blood,” said Brittany Durham, a donor recruitment representative for the American Red Cross’s Tennessee Valley Region Blood Services.

“We are definitely growing this drive and raising awareness! We ended so strong, got everyone in and out in a timely manner and had so much support from our student body. They really carried MTSU this year in the competition! Thank you for your continued support with the American Red Cross.”

MTSU students, faculty, staff, alumni and supporters worked for a third year to “bleed blue” during the Oct. 29-31 drive at the Student Health, Wellness and Recreation Center.  Student volunteers from numerous organizations staffed information tables, directed traffic, posted signs and used social media to encourage as many donors as possible.

MTSU is the recipient of the “Growing by Leaps and Bounds Award” from the Tennessee Valley Blood Services Region of the American Red Cross for its work on the “Bleed Blue, Beat WKU” blood drive competition. Shown accepting the award at the recent “Hometown Heroes” luncheon and awards ceremony from Tennesse Valley CEO Tim Ryerson, left, are Ray Wiley of MTSU’s Recreation Center and Jennifer Kirk of Student Programming and Activities. Valisa Thompson, Red Cross Board chair, at far right, also is shown with representatives of the Big Sandy Community, who received a “Leaps and Bounds” award, too.

MTSU won the inaugural drive, the brainchild of Director of Athletics Chris Massaro, in 2010 and also took the title in 2011.

The university recently received the “Growing by Leaps and Bounds Award” from the Red Cross for its efforts in the “Bleed Blue, Beat WKU” campaigns.

MTSU collected 551 units of blood in 2010 and has increased its numbers each year.

Planning will get under way late next spring for the 2013 blood drive, when MTSU aims to “Bleed Blue, Beat WKU” once again.

Diane Turnham, MTSU associate director of athletics, said the real winner in the competition will always be the Red Cross and the people it serves.

“That’s what it is all about,” Turnham pointed out. “While it is always great to compete against Western on the field, it is also satisfying to help others. And we can do both with this blood drive.”

The American Red Cross put out a call Oct. 30 for donors around the nation to step up with whole blood and platelet donations to counter cancellations of hundreds of drives in East Coast states in the wake of Hurricane Sandy.

Donors who missed the “Bleed Blue” competition at MTSU can still give blood anytime to help ease the shortage. Visit www.redcrossblood.org and follow the directions to find a site near you and make an appointment to donate.